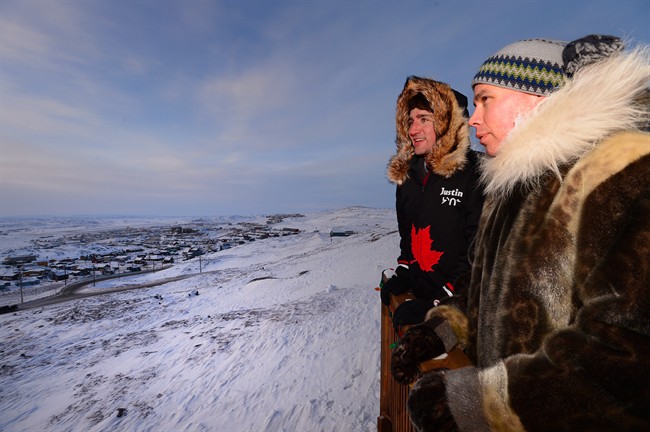 IQALUIT, Nunavut – The federal government pledged Thursday to take steps to address the painful historical memories of Inuit who experienced relocations and mistreatment during the tuberculosis epidemic of the 1940s, 1950s and 1960s.

The announcement came after Prime Minister Justin Trudeau sat down with Inuit leaders and signed a joint declaration in Iqaluit — his first visit to the territories since the 2015 election — committing to multiple future meetings.

There is a lot of work left to address the unique social, cultural, economic, and environmental issues Inuit face every day, but progress is being made, Trudeau said.

“The Inuit-Crown partnership committee will play an important role as we take action on the priorities that matter to Inuit and Canadians,” he said.

“We’re going to come together with senior officials that are going to decide how to craft action on things like land claim implementation, on health issues —whether it is suicide prevention or tuberculosis — housing and infrastructure or language and culture.”

Tuberculosis infection rates are about 50 times higher among the Inuit population compared to the general population, the department said last year.

Trudeau also met Thursday with Nunavut’s premier, Peter Taptuna, and made an impromptu visit to a local women’s shelter to drop off goods.

In the evening, the prime minister attended a community gathering at a high school attended by dozens of people, including a number of territorial and federal employees.

During the event, Trudeau was confronted by 34-year-old Zoya Martin — a biologist in the public service who is on maternity leave to care for her eight-month-old son, Parker.

She demanded to know more about what the government was doing about the problem-plagued Phoenix payroll system, which resulted in more than 82,000 government workers being underpaid, overpaid or not paid at all.

The backlog has been pared down to fewer than 7,000 files, although dealing with them has significantly slowed the processing of new payroll changes that have been filed over the last few months.

Trudeau seems genuinely frustrated by the problem, Martin said. The issue is “unacceptable” and the government is working on the matter, the prime minister said.

Bethany Scott also attended the event and held up a sign complaining about the government’s decision to abandon its campaign promise on electoral reform — something she described as a “betrayal.”