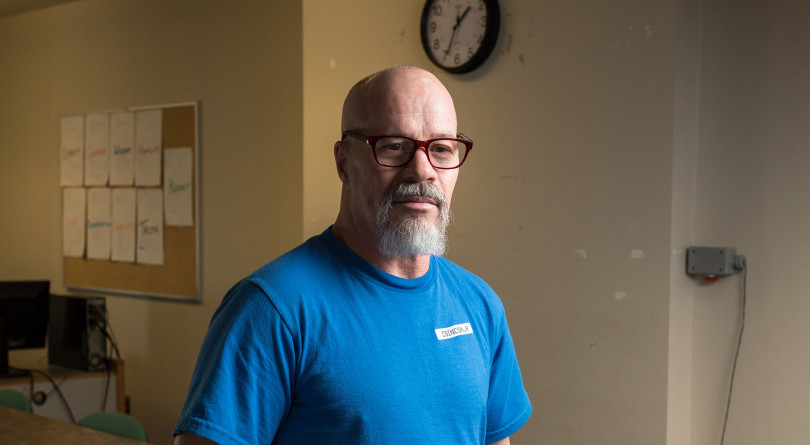 Ray Csincsa walked to his room and opened the package he had just signed for. It was a cardboard envelope about a foot long, covered in Chinese lettering and addressed to his alias, Thomas Greene. Csincsa was a little surprised he had to sign for the package, but didn’t think much of it. He opened the envelope and took a sample of the white powder inside. The high he experienced soon after confirmed it was what it was supposed to be: fentanyl.

This package contained about 10 grams of the drug, enough to produce about 11,000 doses. It was more than Csincsa had ever ordered to his Winnipeg rooming house. Just a few months earlier, the police had shut down his upstart, pre-legalization marijuana delivery business after a man he thought was a customer turned out to be an undercover officer, with police raiding his hotel room and placing him under arrest. Rather than get out of the business, however, the unemployed 53-year-old decided to try his hand at dealing fentanyl. He had already developed an addiction to the opiate and knew how to order it on the dark web, a corner of the internet that can only be accessed with a special browser and whose sites aren’t indexed by Google.

It used to take more than an internet connection, a high tolerance for risk and some technical savvy to become a drug dealer. To purchase drugs at wholesale prices and develop a customer base, you had to know someone who knew someone—and usually those someones had links to organized crime. Police say that’s still the case for the vast majority of drug trafficking in Canada, including the fentanyl trade. But drug markets on the dark web, which are in many ways similar to online megastores like Amazon, have made it possible for entrepreneurial types like Csincsa to order a stash with a click of a mouse and start selling it on their own.

READ MORE: For fentanyl importers, Canada Post is the shipping method of choice

In Csincsa’s case, it didn’t work out. The delivery man who had asked him to sign for the package was yet another undercover cop. Within minutes, Csincsa was on the floor, under arrest once again. When he was sentenced two years later, in 2018, he became the first person to be convicted of importing fentanyl in Manitoba. By that time, the drug’s role in the country’s worst public health crisis since the Spanish flu of 1918 was well-established, with opioid overdoses claiming more lives each year than suicides and car accidents.

“For every person who would have received some portion of these drugs, you rolled the dice with their life,” said the judge who handed Csincsa a 10-year sentence. “Other people who might be inclined to do what you did and ultimately roll the dice with some poor addict’s life must know that this will be treated exceptionally seriously by the courts.”

Csincsa, who spoke with Maclean’s from the Stony Mountain Institution, a federal prison near Winnipeg, says he never thought he was risking such a serious sentence. He was aware of the overdose risks posed by fentanyl, he says, but he thought he could help people by selling them drugs he believed were pure and safe and came from a source he trusted. Today, however, he realizes his judgment was clouded by addiction.

“I didn’t on purpose want to jeopardize anyone’s life or put anyone in harm’s way. It really was due to a lack of thinking things through in a logical and constructive way,” he says. “I totally don’t agree with me becoming involved with illegal drugs at all. I wish I never did. I know I never will again.”

Whatever his state of mind, Csincsa’s story provides a view into the inner workings of a changing drug trade that police and prosecutors have struggled to get ahead of. Today, a foot-long envelope can fit tens of thousands of doses of a potent synthetic opioid like fentanyl; overseas laboratories can invent designer drugs faster than politicians can pass laws banning them; and drugs increasingly cross borders through the mail rather than in the backs of trucks. The way police and the courts cracked down on Csincsa, a small player in this new world, is illuminating.

RELATED: The fentanyl risk for postal workers: health and safety is not a given

Csincsa had a marijuana trafficking conviction from earlier in life, but his more recent foray into do-it-yourself drug dealing started after he was laid off from his job as a painter in 2013. After looking for work for years, he got the idea to start a marijuana delivery service after Justin Trudeau, then the Liberal leader, announced he would make cannabis legalization part of his election platform. Csincsa had contacts in the cannabis world in Vancouver and Toronto who could supply him with wholesale quantities of weed, and had taught himself to use encrypted online communication methods and bitcoin to arrange shipments from them that were relatively secure and hard to trace.

Csincsa did not employ the same level of stealth to his efforts to market his business, however. Taking a page from the playbook of marijuana activists like “the Prince of Pot,” Marc Emery, he printed flyers advertising “HIGH GRADE CANNABIS FLOWERS, EXTRACTS AND EDIBLES” and taped them to telephone poles around the city, with an email address where prospective customers could reach him. He published that same email address in posts on his Facebook and YouTube accounts, which meant anyone who Googled it could easily find his real name and photo. In YouTube videos, Csincsa pulled stunts like planting cannabis seeds outside the police station and bragging about posting flyers nearby to bring attention to the injustice of prohibition.

Meanwhile, Csincsa’s fentanyl habit was ramping up. He had obtained a prescription for it in early 2015 to control chronic back pain he’d developed from car accidents, but abandoned that in favour of stronger and cheaper drugs available on the dark web. Csincsa had no idea two separate law enforcement agencies were onto him: the Winnipeg police, which had started the undercover sting, and the Canada Border Services Agency (CBSA), which started flagging and confiscating packages containing fentanyl en route to his address. Unlike sophisticated criminal operations that typically have an arm’s-length person order and collect drugs shipped through the mail, Csincsa was ordering fentanyl directly to his home address and sometimes using his real name.

Csincsa says he convinced himself that some of the packages he ordered never arrived because the seller was ripping him off. “I kind of talked myself out of thinking it was [law enforcement] confiscating it. I thought if they could have confiscated one package, they would have busted me right then and there,” he says. “It was kind of dumb thinking. I think that was one of the side effects of being mildly addicted to fentanyl.”

READ MORE: ‘I signed up to be a mailman, to deliver Christmas cards. Not fentanyl.’

It wasn’t completely irrational, in fact, for Csincsa to suppose police might ignore his fledgling business. People buy drugs from the dark web and resell them at a markup all the time without attracting attention from law enforcement. The RCMP focuses most of its attention on the major organized crime operations importing the majority of the country’s fentanyl. And Csincsa was far from the only Canadian making a bet on cannabis legalization before the law caught up with his business model, with illegal dispensaries openly selling marijuana in cities across the country around the same time.

Dealing with the increase in illegal drugs being shipped through the mail is a major problem for police, who have limited powers to search packages sent through Canada Post. That CBSA flagged Csincsa’s shipments at all was extraordinarily unlucky for him. Or, as he now sees it, a stroke of good luck in the long run. He says he’s glad his limited tenure as a dealer ended with incarceration, rather than overdose or violent death for stepping on another dealer’s turf.

He still thinks the government should legalize drugs and move toward a harm-reduction model rather than focusing on enforcement. But he regrets his “guerrilla gardening” videos and anti-police rhetoric. He says he’s thankful someone stopped him before he could hurt anyone.

Today, Csincsa is focusing on his relationship with his adult sons, which he knows will be damaged beyond repair if he goes back to drug use. He’s hoping to get early release in the summer of 2020 and move to a halfway house near his mother in Penticton, B.C. Eventually, he’d like to open a pawn shop.

Csincsa says his harsh sentence has deterred him from returning to drugs, but such enforcement measures haven’t put a dent in Canada’s opioid overdose crisis. More than 10,000 Canadians have died in less than three years, according to the most recent statistics from the Public Health Agency of Canada. The easy availability of cheap, powerful, lab-made opioids like fentanyl is a major driver of the death toll. There’s a growing consensus among public health officials that the best way to save lives is to offer opioid users a safe supply of drugs, with harsher enforcement only encouraging suppliers to use even cheaper and deadlier fentanyl analogues.

Still, Csincsa hopes his story will inspire someone considering becoming a dealer, via the dark web, to rethink things. It won’t solve the overdose crisis, but it might set at least one person’s life on a different path.

This article appears in print in the July 2019 issue of Maclean’s magazine with the headline, “Fentanyl at the click of a mouse.” Subscribe to the monthly print magazine here.