Fentanyl is going missing from Ontario hospitals at an alarming rate

From single patches, to vials to entire cartons, fentanyl is going missing from hospitals across Canada, and nowhere is this happening more than in Ontario.

As the Ontario government launches an “emergency taskforce” of front-line workers to advise on next steps in the fight against the province’s opioid overdose crisis, hospitals are losing the potent drug at an increasing rate.

READ: How fentanyl turned an ER doctor into an addict

Documents obtained by CityNews through an Access to Information request reveal that there were 254 incidents in Ontario hospitals where the drug was lost, stolen or misplaced between 2010 and 2016. That’s an average of 42 loses a year – most unexplained. 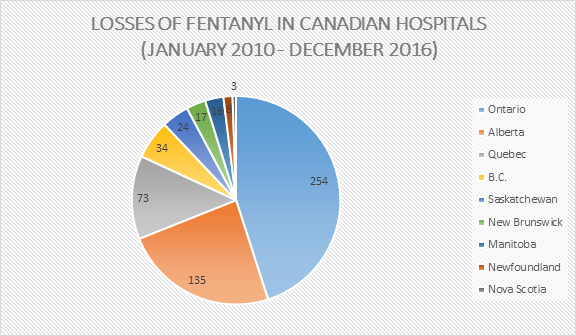 The province has exceeded that in the last 12 months, with 50 cases of missing fentanyl since September 2016. Of those, only five were officially attributed to “pilferage.” The rest are officially listed as “unexplained” or “other.” 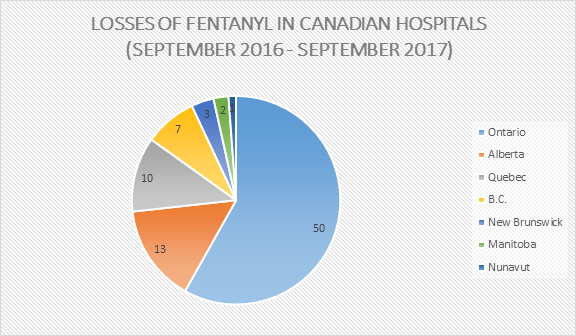 All of this is happening as Toronto faces an unprecedented spike in deaths attributed to opioid overdoses. Between May and October of this year, there have been 1,551 overdoses, not all fatal. That’s about 70 a week. To help combat those numbers, Toronto Public Health has opened a safe-injection site, which has seen more than 360 visits since opening August 21st.

READ: Across Canada, manslaughter charges against fentanyl dealers pile up

Fentanyl gets onto the streets in a variety of ways: it’s smuggled from other countries – despite the border agents’ efforts to stop it, it’s manufactured here in make-shift labs and it’s stolen from hospitals and pharmacies to be sold on the streets.

In August, a Sarnia nurse was charged after police allege he stole a variety of narcotics from a Blue Water Health operating room on Aug. 10. The documents obtained by CityNews show four packages of fentanyl went missing from Ontario hospitals that day, but doesn’t break down thefts by hospital.

About a dozen Quebec nurses have been temporarily suspended over the last decade for stealing fentanyl from hospitals, according to a Canadian Press analysis of the Quebec Order of Nurses’ disciplinary council decisions. That only accounts for a small fraction of the drug that’s gone missing from health care centres.

Jeff Yurek, a pharmacist and the health critic for the Progressive Conservatives, says Ontario wouldn’t be experiencing so many thefts or losses had the Liberals had acted sooner.

“They’ve been really slow to react to this opioid crisis, and due to their inaction we’re now seeing where there’s gaps showing in the system,” he says.

Yurek says the province should be calling on the Ontario College of Pharmacists to help curb losses in hospitals.

“The Ontario College of Pharmacists has, for decades, worked with community pharmacies to prevent diversion and set up processes,” he says. Recently, the professional body also started to oversee hospital pharmacies.

He suggests that the province adopt the college’s pharmacy fentanyl management plans in hospitals too.

When asked if the emergency task force would address the increase in unexplained losses and thefts from hospitals, Laura Gallant, a spokesperson for Minister of Health Eric Hoskins responded saying specific topics of discussion will be determined once final membership is finalized.

READ: These are the provinces where the opioid crisis is growing fastest

“The immediate goal is for the task force to advise on public awareness and education initiatives. We would not rule out any topic at this point that can help us fight the crisis,” she said.

The task force was announced last week, but no members have been named. Allan Malek, the Ontario Pharmacists’ Association’s executive vice-president says his organization has been in talks with the province however, he’s not sure how involved pharmacists will be in this latest attempt to curb the crisis.

He says there are already protocols for community and store-front pharmacies that help to ensure fentanyl doesn’t get into the wrong hands. “There is patch-for-patch legislation that is already in place and that ensures that patients that are using patches on a regular basis are actually returning their used patches. So that these patches don’t get diverted, don’t get tossed out in the trash, where someone can come by and pick them up and divert them for other purposes,” he explains.

Under the federal Controlled Drugs and Substances Act, hospitals must report any loss or theft of narcotics to the Minister of Health immediately.

In a statement, Gallant tells CityNews that hospital pharmacies have to ensure “the safe and appropriate storage of drugs,” including “ensuring that the pharmacy and its facilities are secure and safeguarded from unauthorized access, and putting systems in place to maintain an audit trail of the acquisition and movement of drugs along with other record-keeping requirements.”

She adds that “failure to maintain any of the standards of accreditation is considered to be an act of proprietary misconduct which can trigger a disciplinary action at the Ontario College of Pharmacists and lead to the revocation of a pharmacy license.”

Malek says it’s becoming harder for users to get the drug by manipulating doctors and pharmacists with fake prescriptions and other gambits. So he says it’s not surprising that thefts and other losses are increasing in Ontario.

“I think users are finding other means to get to their drugs of choice.”