Social media helped create FHRITP. If it can kill this monster, so much the better. 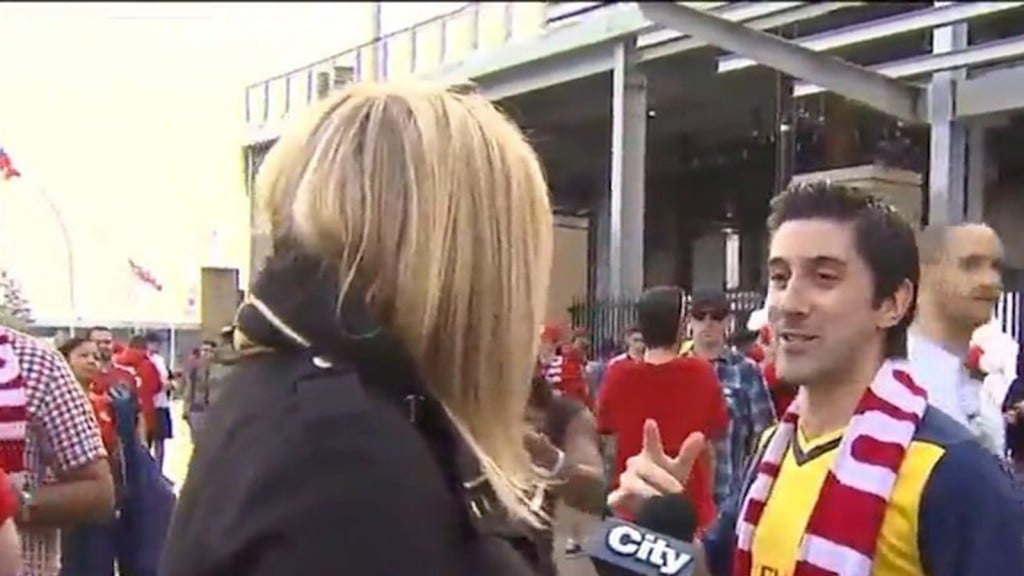 Shauna Hunt interviews a Toronto FC soccer fan in Toronto on Sunday, May 10, 2015, in this video frame grab. (CP/CityNews)

Seldom has the Twitter machine so convincingly demonstrated its versatility. Within 48 hours of disgracing himself on local TV, a Toronto soccer fan is seen around the world, triggering a wave of revulsion toward what is surely the post-Internet era’s stupidest trend. The social media horde then deploys its laser-precise system of mass-triangulation, and by supper the guy is outed as a pro-harassment troglodyte and summarily axed from his six-figure job.

Now, then. Who else wants to try that FHRITP thing? Anyone?

Call it a consensus of the decent-minded. Call it public shaming. But it is possible to believe Shauna Hunt’s marvellous counterattack at Sunday’s Toronto FC game has lowered a boom on a fad that’s been making female reporters miserable for nearly two years. The FHRITP phenomenon is as confounding as it is disgusting—born of an idiotic hoax that a lot of people took for real, triggering a meme that TV women hoped to kill off by starving it of response. They failed. This is the sort of random crap that social media nourishes and elevates, as per H.L. Mencken’s dictum that no one ever lost out by underestimating the intelligence of the general public.

But last weekend, things were different. Hunt, a TV reporter for City (which is owned by Rogers, as is Maclean’s) fought back, creating a dramatic scene that itself went viral, and consequences—real consequences—ensued. Hydro One canned Shawn Simoes, an employee seen in the clip justifying the vulgarity, though it’s not clear who uttered it. Police mused about enforcing laws against harassment and public disturbance, and MLSE, the owner of Toronto FC, started combing surveillance footage in search of the men who shouted the insults. The company, which has banned the four men, said it would be happy to hand the tapes over to the cops.

Related: Emma Teitel on why we must take FHRITP seriously

Together, these developments point to an unlikely outcome. Twitter, a wellspring of prattle that helped start FHRITP, might just play a part in stopping it, closing the mouths of the mouth-breathers who claim a God-given right to intimidate women who are trying to do their jobs. Maybe you knew social media had that capacity, but I must admit I’d come to doubt it. And yes: I think it’s a good thing.

I know: Twitter is a funhouse mirror that exaggerates our best and worst qualities. Everything’s out of proportion. But social media has not substantively altered the basic rules by which we live with each other. One of the most comical arguments rising from the CityNews story is the claim that the shaming of FHRITP perpetrators amounts to an attack on free speech—as if shouting vulgarities in a crowd were a liberty we all cherished before the invention of YouTube. More than a howling misapprehension of the law, this ignores the right of others to speak out against offensive words and behaviour—a right we’ve always used to build consensus against anti-social behaviour.

That’s one of the fundamental reasons for free speech, and if this incident had made news before the age of social media, you can bet that some bystanders—fans, cops, sports team officials—would have spoken out. Simoes might well have found himself looking for work.

Related: Jon Ronson on his book on public shaming

The difference now: we’re all bystanders, and the force of our consensus is awesome. Soon after Hydro One moved on Simoes, tweeters targeted Cognex Corp., a Massachusetts-based automation company, revealing that one of the men Hunt cornered was an employee of the firm’s Canadian branch office; it issued a statement describing his views as “reprehensible.” Wilfrid Laurier University also distanced itself from Simoes, an alumnus, releasing a statement condemning his “extremely offensive and discriminatory comments.” By Wednesday, the story was rattling around Parliament Hill. Peter MacKay, the federal justice minister, agreed that the incident could be fodder for a police investigation (though he stressed he wasn’t trying to influence police), while political grandees of all stripe weighed in on Hunt’s behalf.

I congratulate @shaunacitynews for standing up to harassment. No journalist, or anyone else, should have to face such despicable treatment.

Harassment like that faced by @CityNews reporters is why we launched our #WhoWillYouHelp campaign. #ItsNeverOkay https://t.co/wvGBgK4nub

The question for all of us is when “awesome” becomes excessive. “Twitter justice,” the shorthand term for social media dog-piling that can destroy a person’s life, has been a hot topic of late. And there’s no denying the self-serving smugness behind a lot of the outrage.

Hunt and her bosses have been at pains to make clear they did not post the clips with the intent of getting anyone fired or charged. But Dave Budge, the general manager at CityNews, told me during a live chat on Tuesday that news organizations are used to weighing the importance of a story against the personal damage it might inflict. Twitter, Facebook and YouTube, he suggested, don’t really change that calculus.

“I think social media has ramped up the speed with which information can get out, and probably the reach of a piece of information,” he said. “But a responsible news organization has always had to consider what the impact of the information is on the individuals. Newspapers had to wrestle with this when organizations started publishing ‘johns lists.’ The scope and speed of it may have changed, but it’s not a new thing.”

Which is to say, fear of inducing a social-media shaming should not prevent us from speaking important truths. That applies to anonymous tweeters as surely as to news organizations. Everyone has to live within the law, and if the ostracized men have been wronged by their critics, their soccer team or their former employers, the law has remedies for them, too. I wish them luck.

But the mere fact they felt safe slurring out their nonsense before a TV camera shows that this nasty trend had gotten entirely out of hand. You could blame herd mentality, or the overall coarsening of public behaviour. But the real wonder is that so many female reporters put up with it for so long. If “Twitter justice” achieves what their restraint and stoicism couldn’t, then so be it.