Is it time to consider new ways of choosing a governor general? 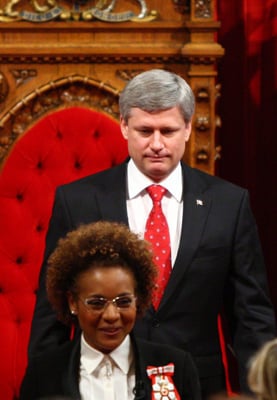 In a contribution to Parliamentary Democracy in Crisis—a collection of essays published shortly after Stephen Harper escaped defeat to a Liberal-NDP coalition in December 2008—York University professor Brian Slattery presents what might be the worst-case scenario for Canadian democracy: a governor general made to deal with an incumbent government that, though defeated in an election, refuses to relinquish power. “It is her role,” Slattery writes, “to ensure that the principle of responsible government is observed and not flouted?.?.?.?She is the ultimate protector of the constitutional order.”

Whatever else Michaëlle Jean might eventually be remembered for, this could be her legacy. In negotiating the Prime Minister’s request to prorogue the House of Commons in December 2008, and another controversial prorogation last December, she may have re-established the viceregal as something more than a reminder of Canada’s heritage.

“We’re likely to have minority Parliaments for the foreseeable future,” says Sujit Choudhry, a University of Toronto constitutional law professor. “The governor general is going to find him or herself in the midst of a political thicket quite often. So being thoroughly familiar with the operations of parliamentary government and knowing who to take advice from, and not being afraid to call political leaders on their interpretations of these conventions, I think would be very good.”

And as discussion turns to Jean’s successor, the question now is newly complicated: who can be trusted to carry this responsibility?

Though viceregals are not appointed to fixed terms, five years is considered a general guideline and Jean’s fifth anniversary would be this September. (Already, Rick Hansen, the well-known activist for the disabled, has been reported to have turned down the job, though his office says he was not officially asked.) A recent Angus Reid poll presented respondents with three potential successors: Hansen, former chief of defence staff John de Chastelain, who helped negotiate peace between England and Northern Ireland, and national Inuit leader Mary Simon, a former ambassador. That Hansen was the favourite, with 50 per cent of the vote, may speak to his celebrity. But it may, with due respect to an admirable and accomplished Canadian, speak to how Canadians view the job: less as a figure of traditional authority than as a ceremonial role meant to put our best face on the country.

“This is the last vestige of the monarchy of Canada, but people expect a fairly down-to-earth Queen’s representative,” says a conservative-minded strategist. He lists a number of potential criteria. The governor general should be bilingual. He or she should be approachable, in touch with Canadian values, and able to handle both the demanding public role and matters of the Constitution. It is this last aspect that is perhaps most crucial and most difficult to define.

The governor general and prime minister have come into conflict before, most famously in 1926 when Lord Byng denied a request by Mackenzie King to dissolve the House. A viceregal need not be formally schooled in such precedent—he or she can call on any number of experts to consult with—but they must be prepared to navigate new dilemmas. “You have to assume you have people who are of suitable character that they will decide controversial issues on the basis not of whim but the expertise that’s available to the institution,” says Scott Reid, a Liberal strategist who worked in former prime minister Paul Martin’s office.

Though she might not have possessed the sort of official experience one would have sought in a governor general had certain events been foreseen, Jean, and the country, managed to survive her brush with political chaos. To say no to a prime minister, though, perhaps one who chose you, would require no small degree of confidence.

If it is not enough to rely on a prime minister’s discretion, a governor general’s judgment and, perhaps, a bit of luck to ensure the constitutional order, it might be time, as parliamentary scholar Ned Franks hinted in a recent paper, to consider other models for selecting a viceregal. In Ireland, for instance, candidates for the office of president, a role similar to our governor general, must first be nominated by 20 members of the lower or upper houses of parliament or four administrative counties. A general vote is then held using a preferential ballot. The current president is a former lawyer and journalist. “My view is the position is more important than we’ve recognized and that we have to have a much better selection procedure than simply relying on the judgment or whims of a prime minister,” Franks says.

In other words, amid all the questions about who would make a suitable governor general, the more pertinent question might be: who decides?