Film, TV, digital productions contributed $2B to Toronto's economy in 2016 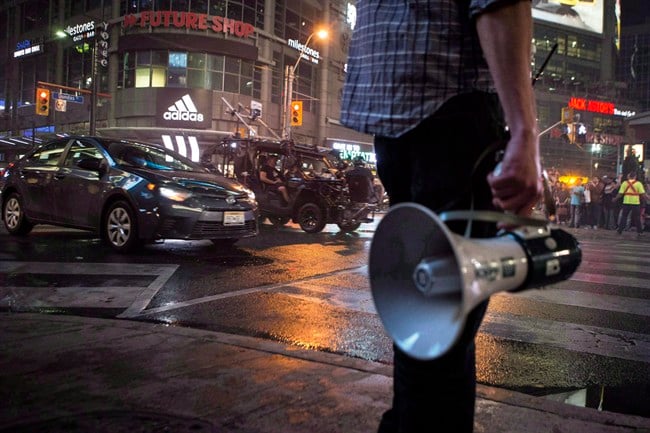 An assistant director stands by as a stunt car drives down Yonge Street, during the shooting of the movie “Suicide Squad,” in Toronto on May 26, 2015. (Chris Young/CP)

TORONTO – Film, television and digital productions contributed more than $2 billion to Toronto’s economy in 2016, Mayor John Tory said Monday as he promised to streamline regulations, helping the city compete with other global destinations.

Calling the industry a “key economic driver” for the city, Tory said that 2016 topped the previous high of $1.5 billion in 2015.

Tory said $800 million of last year’s total came from Los Angeles-based productions, adding that Toronto will have to fight to keep the business.

The mayor said he met with the studios to thank them for their business and to find out what would help them return to Toronto.

“They told me that we had to continue to invest in facilities,” he said.

“We have every reason to be proud and aggressive,” he said. “We are competitive with them in every respect in the film and television and digital production industry, but we’ve got to go down and make sure we sell our story and not be complacent or shy as Canadians often are.”

And he said tax credits are an “important part of the package” that keeps productions coming to the city.

“Atlanta, New York, California itself, they have them, and so it’s really just us being competitive,” Tory said.

In an effort to bring more work to Toronto, Tory said the city is moving to streamline processes for production companies and work with residents in neighbourhoods impacted by filming.

“As our film industry keeps growing every year we are going to create more jobs and more economic success,” he said, noting that the academy award-winning film “Suicide Squad” employed more than 4,700 people while it was being filmed in Toronto in 2015.

He also said that the TV series “Suits,” now in its seventh season, provides the equivalent of 2,300 full-time jobs.

Combining the $2.01 billion with figures from broadcasters and interactive digital media — such as video games — resulted in a total investment figure of $3.26 billion for all of Toronto’s film, television and digital media production last year, the city said in a release.

Foreign and domestic TV series remained the dominant investment type in Toronto, as 115 productions brought in $908 million in 2016, the city said.

Investment by broadcasters was down about $69 million in 2016 at $211 million, while interactive digital media rose to $1.05 billion, from $1 billion a year earlier.

Commercials production spending was up 10 per cent last year to $380 million.

“This is a key economic driver for Toronto, and it enhances our reputation as a home to creative industries,” Tory said.