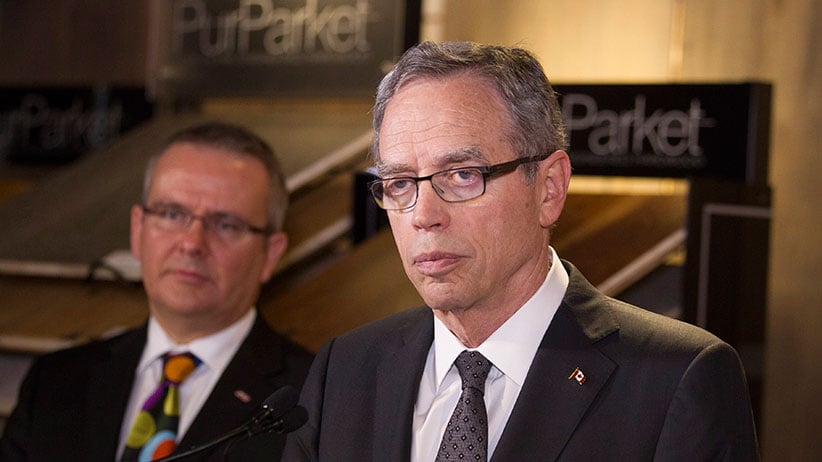 TORONTO – Tax relief is on the way for Canadians, and Finance Minister Joe Oliver hinted Tuesday it could arrive as early as the annual fall economic update.

Oliver told a news conference that plans to balance the budget in 2015 remain on track — the same year the Tories return to the polls.

He said the Conservative government will fulfil an election promise to cut taxes, though he declined to offer any details of the cuts or the timeline for his next economic update.

“There will be tax relief because we are confident we are going to have a surplus next year,” he said, referring to predictions earlier this year of a $6.5-billion surplus for 2015-16.

Earlier in the day, Oliver met with private-sector economists in Toronto to discuss the outlook for the country.

He said that average forecasts for Canada remain steady with those made in September, helped by growth in the U.S. economy which has benefited from a boom in the shale oil and gas industry.

“We’re in an environment where our biggest trading partner is doing well, and it’s looking to be sustainable,” Oliver said.

“But there are other regions that are not doing as well, and other risks that we’ll have to take into account.”

Earlier this month, Prime Minister Stephen Harper announced that last year’s federal deficit came in at $5.2 billion compared with the $16.6-billion shortfall that was projected in the budget.

However, Harper has insisted there will not be a surplus until 2015-16 despite suggestions by economists and budget watchers that Ottawa may be on pace to balance its books in its current fiscal year.

The Conservatives made a series of expensive campaign promises in the last election that were contingent on a balanced budget including income splitting for couples with children under 18 and a doubling of the annual Tax Free Savings Account limits.

Oliver highlighted the falling price of oil Tuesday as one factor that could impact Canada’s economic growth, as well as the troubled global economy which has been hindered by political turmoil.

“At the same time the IMF downgraded global economy, it upgraded the projection for Canada and the U.S.,” Oliver said.

The IMF said last week it expects the U.S. will grow 2.2 per cent this year, up from an earlier forecast of 1.7 per cent, but kept is forecast for next year unchanged at 3.1 per cent. It also raised its outlook for Canada to 2.3 per cent this year and 2.4 per cent in 2015, up a tenth of a percentage point in both years from a July forecast.

The Conservatives have been unveiling details about planned tax cuts ahead of the election next fall. Small businesses will get a freeze on employment insurance premiums while the government also plans to double the child fitness tax credit.

The surprise forced Oliver to hastily table a motion on Friday, earlier than planned, in order to give all Canadians full access to the information.

Oliver the told the news conference that he is “very concerned” about the error and has opened an internal investigation into the matter, which some critics have suggested may have influenced the direction of Canadian stock markets.

“We don’t believe there were matters disclosed which would move markets, but we’re looking at that issue as well,” he said.