The anguished quest to find a new home for Howard, the world's largest gnome 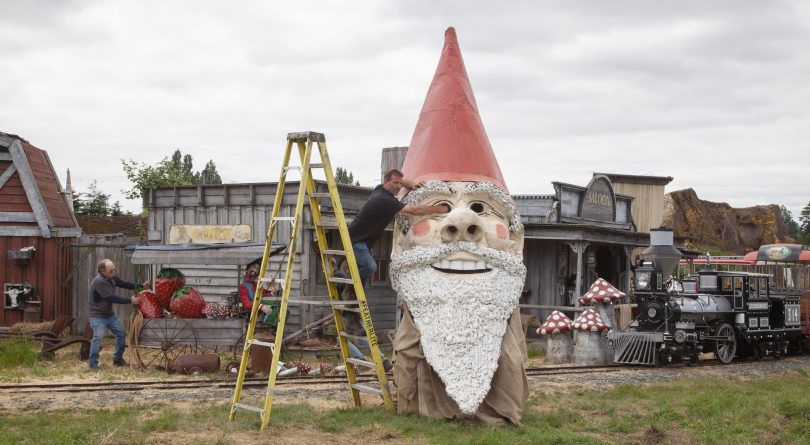 Galey has big plans for his newly acquired gnome, including new skills like blinking, waving and talking through a speaker set in his mouth (Photograph by Jen Osborne)

Standing 7.19 m tall on the side of Highway 19 in Nanoose Bay, Vancouver Island, Howard the Gnome was hard to miss. For 25 years, Howard—declared the world’s largest gnome in 2009 by the Guinness Book of World Records—gave a gregarious grin to passersby, becoming a ﬁxture in the local seaside community. “He’s a landmark,” says Bridget Matawish. Her grandfather, Rob Hale, constructed Howard using recycled materials shortly after passing ownership of the family’s amusement park to Matawish’s father, Bruce Hale. Even after the family business changed from amusement park to gas station, then was sold to Esso in 2006, Howard remained; visitors sometimes made a trip just to snap pictures of the beloved giant.

Which is why it came as a shock when Howard’s new owners, Chevron Canada, told Matawish in February that she had two months to move Howard or else he would be torn down. Chevron had inherited Howard when it bought the property from Esso in 2014, says Matawish. The new operators of the gas station, she says, “didn’t see a value in keeping him.”

Determined to ﬁnd Howard a new home, Matawish asked friends on her Facebook page to spread word of his availability. Within 24 hours, she had more than a 1,000 shares, and in the following days, 100 applicants from across North America—and some in the U.K.—vied for Howard. Matawish was overwhelmed, but had one clear stipulation: “We wanted to keep him on the island.”

Meanwhile, two hours south, in Saanich, Rob Galey’s Facebook wall was lighting up, as well. To Galey’s friends, Howard was an obvious ﬁt. The entrepreneur and third-generation farmer was the ﬁrst of his family to promote agri-tourism as part of the family business, Galey Farms. He started his ﬁrst corn maze in 1999. In 2000, he built an entire ghost town. By 2006, he’d built a half-scale train track across his 16-hectare property to show off the many exhibits, which has come to include a half-scale foam model of the Egyptian Sphinx, an Addams Family-themed graveyard and a dinosaur display complete with a waterfall that pours 2,000 gallons per minute. As soon as Galey clicked the link his friends had posted, he laughed. Howard was no stranger to him either.

A motocross enthusiast, Galey’s initial foray into business had been Galey Racing, an indoor motorcycle racing company located in Nanoose Bay. Across from the empty barn he used as a raceway stood Howard the Gnome. “Every morning we’d get our A&W and say ‘Morning Howard,’ ” he recalls. So Galey sent a message expressing interest, and three weeks later, a woman showed up at his farm. It was Matawish, and she informed Galey that he was on a shortlist of ﬁve potential owners chosen by her family.

As they talked, the two realized they had much in common—both were part of family-run businesses, both had experience with amusement parks and both were community-oriented. Galey also shared the industrious nature of Matawish’s grandfather: many of his attractions were discarded structures found by the side of the road that he refurbished. Matawish left, and later that night, Galey got the call: Howard was his—free of charge.

But the transfer proved more difﬁcult than a simple transaction between kindred spirits. News quickly spread, and shortly after ﬁnding out he was getting Howard, Galey received calls from both the Municipality of the District of Saanich and B.C.’s Agricultural Land Commission (ALC). “I’ve driven by Howard every Easter,” says ALC commissioner Gordon Bednard. “So when I heard the world’s largest gnome was being moved, I looked into it. And I realized he was being moved onto an agriculture land reserve.” While agri-tourism is permitted on such sites, putting up non-farm-use structures for more than 90 days is not. Galey responded promptly, assuring Bednard and the municipality that, like the rest of his attractions, Howard would only be in operation for the month of October. Bednard dropped the matter, but the local government had a problem with Howard’s legendary stature.

According to the District of Saanich, he is 18 inches too tall. The district told Galey he would have to apply for a height variance, a process that could take up to six months. At ﬁrst, Galey felt thwarted. Then he met with municipal staff and realized they too wanted to see Howard at his farm. A district spokesperson says the variance request will be processed as quickly as possible; until then, Galey can’t legally put Howard’s hat atop his head—a requirement that doesn’t bother him all that much. He plans on using the intervening time to mechanize Howard. By the time October rolls around, the big gnome will blink, wave and even talk through a speaker mounted behind his mouth. “I’m so honoured to have him,” Galey says, “but I can’t just have him be a standing gnome.”

Howard’s role will be primarily educational. He will be surrounded by an array of flying model bugs in order to teach kids about the importance of biological symbiosis. “I’m a berry farmer,” he says. “No bees, no me.”

Which is exactly the sort of job Matawish had hoped for Howard. “We wanted him to be somewhere he would be enjoyed by people,” she says, adding that “the Galeys really valued him.” For her, that means more than any monetary amount that might be attached to him: “He was absolutely not for sale.”

This article appears in print in the August 2019 issue of Maclean’s magazine with the headline, “Howard’s last stand.” Subscribe to the monthly print magazine here.