The prosecutor argues Supt. David (Mark) Fenton only deserves to be demoted one rank for one year 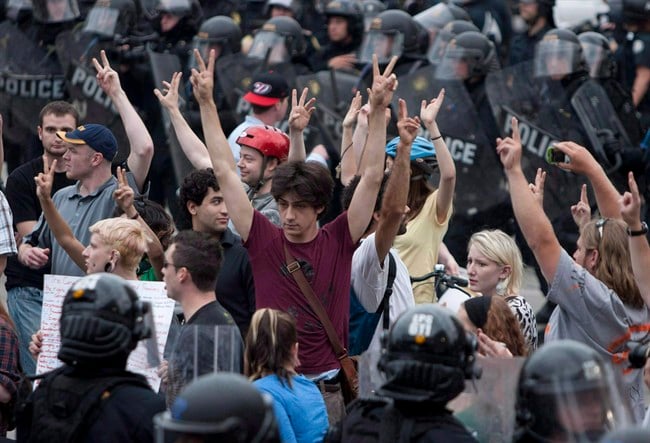 Police encircle and detain a crowd of protesters in Toronto on June 27, 2010. A sentencing hearing for a senior officer involved in the civil liberties breach that stained the chaotic G20 summit six years ago begins today. (Chris Young/CP)

TORONTO – A senior police officer deserves to be fired for the wanton trampling of civil liberties during the tumultuous G20 summit six years ago, his sentencing hearing heard Wednesday.

Supt. David (Mark) Fenton has shown no real remorse and attempted to blame everyone other than himself for the indiscriminate mass arrests that stained the weekend gathering, lawyers for the complainants argued.

“His conduct at the time was alarmist. He continues to be alarmist.”

Lei, who speaks for scores of people detained for hours by police in full riot gear in pouring rain and plunging temperatures at a downtown intersection, said what the experienced officer has done is “dodge and duck” responsibility for his actions.

Another complainant lawyer, Adrienne Telford, said the incident commander was responsible for the wrongful detention of almost 600 civilians who have been deeply affected by his actions.

“A single police officer suspended the Constitution and turned the downtown core into a police state,” Telford told the hearing. “It was a blatant abuse of power.”

Hamilton found some of Fenton’s testimony was simply not credible, and said the officer had no reasonable grounds to order the detentions, in one case just six minutes after coming on shift.

“He viewed the indiscriminate mass arrest as justified,” said Telford, who represents a group arrested as they sat outside a downtown hotel singing, “Give peace a chance.”

The prosecutor, Brian Gover, argued Fenton only deserves to be demoted one rank for one year, a punishment that would cost him between $10,000 and $15,000 in lost pay. Such a penalty, rather than the defence request for a reprimand, would be a “meaningful consequence,” Gover told Hamilton.

The lawyer noted Fenton testified he had done the “right thing” and “would do it again.”

“This was not a momentary lapse of judgment,” Gover said.

The G20 weekend was marred by a spate of vandalism in which store windows were smashed and two cruisers set alight. About 1,100 people — most peaceful protesters or innocent passers-by — were detained or arrested. Many ended up held in a widely condemned makeshift detention centre.

Gover said the challenging situation that weekend called for cool heads to prevail but Fenton instead acted like a “hot head” who was “spoiling to use his authority.”

“Hundreds of people were denied their constitutional rights as a result of (his) actions,” Gover said.

At the same time, the prosecutor said, Fenton enjoyed a previously “exemplary” record who enjoys strong support from his subordinates, some of whom wrote letters praising him.

One writer said Fenton “got the job done and kept the city safe,” while another said he should have been rewarded.

“We should be pinning a medal on his chest because he succeeded in his assignment,” a writer said.

Telford called the praise “very concerning” and evidence of the need — given the guilty finding — to send a clear message of condemnation that a “slap on the wrist” would not achieve.

If dismissal is too much, another plaintiff lawyer argued, Fenton should be demoted and given the maximum allowable punishment of a 30-day suspension, lose a day’s pay and forfeit another 20 days off.

Fenton, a 27-year member of the Toronto police force, is the only upper command officer to face disciplinary proceedings arising out of the summit. The officer, who once described the G20 protesters as a “marauding group of terrorists,” did apologize through his lawyer after his conviction.

“Isn’t his apology indicative of his recognition of failure?” Hamilton asked at one point.

But the plaintiff lawyers said the apology rang hollow in light of his attempts to justify his illegal actions. They noted he has blamed his superiors for failing to intervene, and the officers on the ground for carrying out his orders.

“It’s more than a lack of insight,” Lei said. “It’s a rejection of your very own findings.”