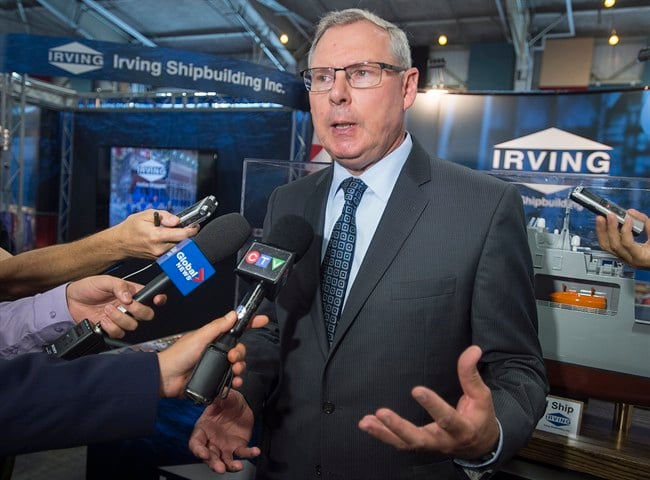 HALIFAX – Assembling the Lego-like blocks of Canada’s first Arctic offshore patrol ship on time and within budget is proving to be a “significant challenge” for the Irving Shipyard, though its top executive says a promised deadline will be met.

Kevin McCoy said Wednesday his firm still plans to deliver the first of the ships designed to steam off Canada’s northern coasts in 2018, as originally announced.

However, he told reporters at a defence industry conference in Halifax that his firm’s efforts to create North America’s most modern shipyard from the ground up hasn’t been easy.

“Now I’ll tell you, starting a shipyard up from scratch … all new software, new training, over 700 new procedures in place, establishing a supply chain for shipbuilding in Canada, all of that is a significant challenge,” he said.

He also said he realizes that the new Liberal government is observing his company’s progress on the offshore patrol ships as precursor to the yet-to-be finalized contracts for the replacements for Canada’s aging warships.

That project could sustain the yard for the next two decades.

“Clearly it’s a confidence builder for the Canadian government. The Arctic ships are a great warmup to the Canadian surface combatant,” said McCoy, standing before a model of the ships conceived of by the Harper government.

Observers of the procurement process say the Liberal government has been looking for ways to curb costs on the Arctic patrol vessel program.

Michael Byers, a professor of political science at the University of British Columbia, says Ottawa will likely have to scale back on promises to create six to eight of the Arctic patrol vessels and 15 warships to replace much of Canada’s bluewater fleet.

The original 2011 shipbuilding strategy announced by the Harper government was an umbrella agreement that designated the Irving shipyard in Halifax and the Seaspan shipyard in British Columbia as the two locations.

However, the specific deals on how many ships will be completed is the subject of contracts being worked out between the yards and the Trudeau government.

Byers, who closely follows defence procurement, says the resurrection of the Davie shipyard in Levis, Que., has given National Defence a possible alternative where some of the shipbuilding work could be shared out — putting some pressure on the prime contractors to fulfil timelines and stay on budget.

Original projections put the cost of building 15 new vessels at $26 billion, but internal documents and reports published last fall suggest the bill could run as high as $40 billion, with the federal public works minister recently declining to provide updated figures.

Byers says the Arctic patrol ships are challenging because the Harper government chose to create a new type of vessel that no other country had built, which can lead to design challenges and delays.

“There will be real pressures to compromise on capabilities to keep costs down. The federal cabinet will be scrutinizing all of this closely,” he said.

Still, McCoy announced during his speech that the shipyard currently has 50 of the 64 modular pieces of the first Arctic patrol vessel, HMCS Harry Dewolf, in its facility, and it cut steel last month for the second vessel, HMCS Margaret Brooke.

The company has been trying to build public awareness of shipbuilding’s importance to the Canadian economy, billing itself as being the key to a sustainable national shipbuilding industry that will avoid previous boom and bust cycles.

The company handed out a glossy brochure Wednesday that highlights that the company has hired over 1,300 employees, and said the magazine will be distributed to every household in Halifax to increase awareness of progress at the yard.

Harper announced his plans for Arctic vessels during the 2006 federal election campaign, saying the Tories would build three armed icebreakers.

This promise was later transformed to six to eight Arctic offshore patrol vessels and a refueling berth in the Arctic.