Organizer says the larger than-expected turnout sends the message to politicians that 'change needs to happen.' 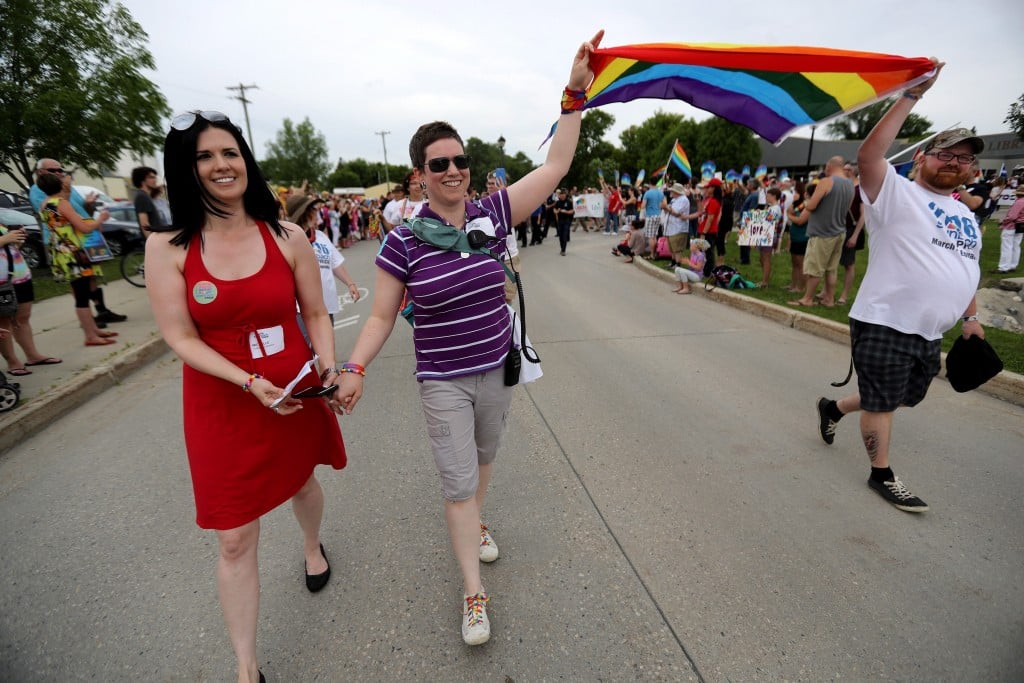 STEINBACH, Man. – A former member of a religious colony told the first Pride parade ever held in this small Manitoba city how important it is for gay people to speak up and share their stories.

“I expose my life so that others can know that they are not alone ? they too deserve a happy, fulfilling life,” said Tyrone Hofer before a cheering crowd.

Hofer, a former member of a conservative colony of Hutterian Brethren, said he wished he’d had someone to talk to as he was growing up and struggling with his sexual identity. That’s why, he said, he and other openly gay Hutterites are now speaking publicly.

RCMP estimated 3,000 people attended the Pride march, far higher than the anticipated 1,000. Police had to open a second street to accommodate everyone.

Attendees were a mix of locals, those who made the 60-kilometre drive from Winnipeg and others who had come from as far as Ottawa and Toronto.

There were no overt signs of religious or anti-gay protest.

Marchers – who included members of the military as well as red serge-clad Mounties – gathered in a local park before walking a short distance to city hall to hear strong and sometimes emotional messages of support for local LGBTQ people.

Some spoke openly of the pain and isolation they felt in a small-c conservative area often dubbed Manitoba’s Bible Belt.

Hofer left his southern Manitoba colony five years ago because he was gay.

“For gays ? it was extremely difficult,” he said. “What I found most challenging was listening to what people were saying about gay people – about me.

“The worst part was not being able to speak out and defend myself. I had to absorb those verbal insults and find ways to deal with them on my own. I started to hate myself for being gay,” Hofer said.

He said he prayed to God to “be fixed.”

After coming out publicly a year ago, Hofer said he found “overwhelming” support among friends, but little to none among family and fellow Hutterites.

Michelle McHale, one of the organizers of Saturday’s parade, became active when her child was bullied because of McHale’s same-sex partner.

McHale fought unsuccessfully to broaden some area school division’s policies, which state that same-sex relationships cannot be discussed in classrooms prior to high school, even if students ask questions.

She has filed a human rights complaint over the issue.

But McHale said the larger than-expected turnout sends the message to politicians that “change needs to happen.

“For people to come out in this many numbers – it can’ t be ignored. ”

Conservative MP Ted Falk declined to attend the event citing a conflict with his “values of faith, family and community.” Steinbach’s mayor and legislature representative also did not attend, citing prior commitments.

Rich diversity is “at the core of our national identity,” Trudeau’s statement said.

“We must continue to support those who have experienced discrimination, and remember that we cannot let up on the fight against bigotry.”