Five dead after violence at university house party in Calgary 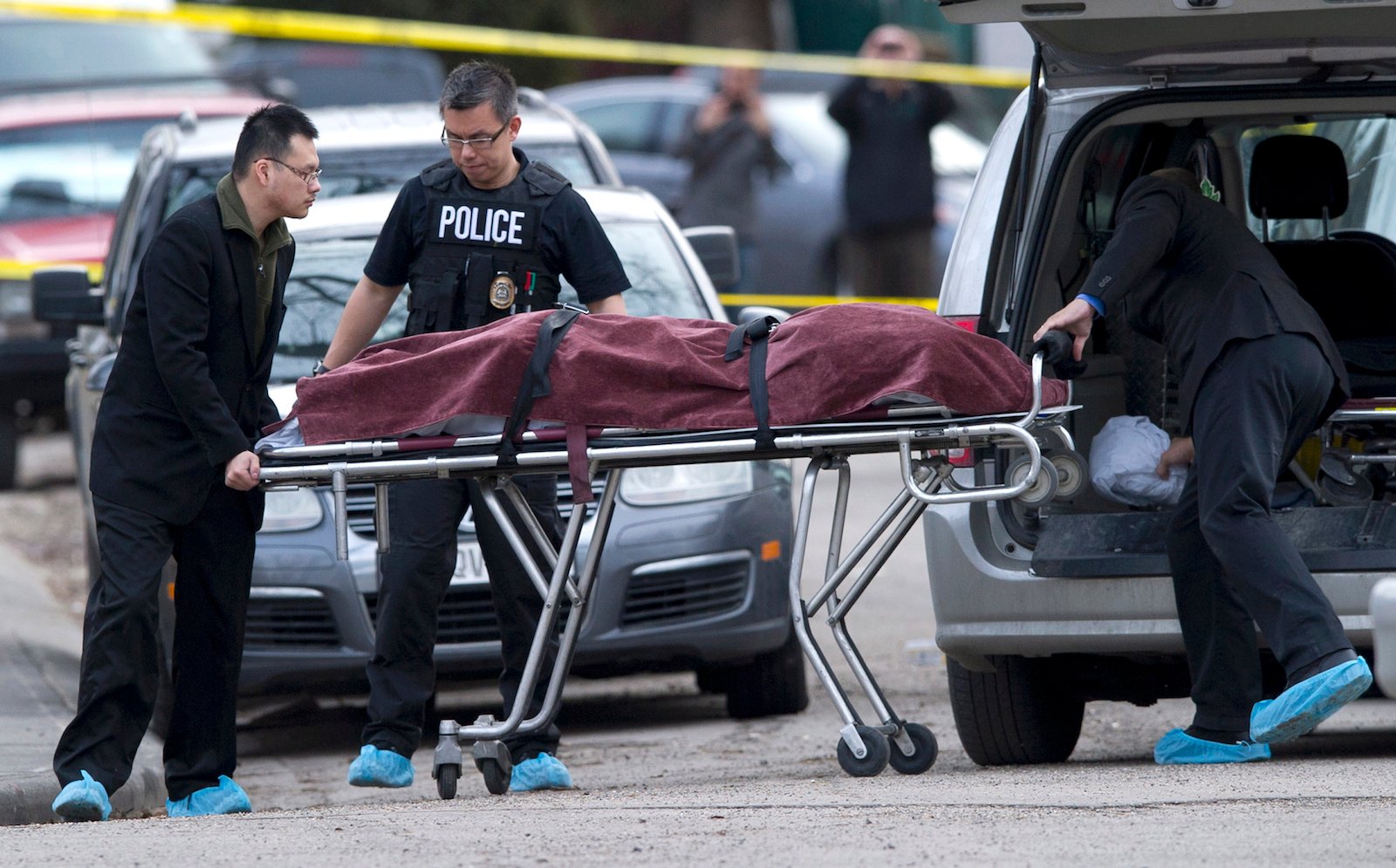 Police remove a body from the scene of a multiple fatal stabbing in northwest Calgary, Alberta on April 15, 2014. Police say five people are dead after a stabbing at a house party. (Larry MacDougal/CP)

CALGARY – Calgary police say the son of one of their own is a suspect in the worst mass murder in the city’s history, a bloody and baffling attack on a group of university students at a house party.

Five young people were celebrating the last day of classes at the University of Calgary when they were stabbed to death early Tuesday. A suspect was arrested a short time later after he was tracked down and bitten by a police dog.

Police Chief Rick Hanson told reporters that he spoke with the suspect’s father, a 33-year veteran with the force, and the officer and his wife are heart-broken.

“They are now feeling so much sorrow … Those young people are dead and they are absolutely devastated.”

Hanson said the suspect, a student at the university, was invited to the party in the northwest residential neighbourhood of Brentwood, not far from campus. He showed up after working his shift at a grocery store and was welcomed inside.

There had earlier been about 30 people at the party, which neighbours described as quiet and low-key. That number had dwindled to about 20 when violence erupted shortly after 1 a.m.

Hanson said the suspect allegedly brought a weapon, or “instrument,” from work to the party, but grabbed a large knife from inside the house.

He “targeted the victims one by one, stabbing them several times,” said the chief.

Investigators were still trying to determine what motivated the attack.

“Was there anything that precipitated the event? Was there something that anyone had done that anyone could have taken as an insult or an affront to this individual? To the best of our knowledge right now, there’s nothing to indicate anything like that happened,” Hanson said.

He said it appears no one at the party had been sleeping, but everyone was taken off guard. One of the party-goers was able to call 911.

Police found three men dead at the scene, while another man and a woman died in hospital.

“This is the worst murder — mass murder — in Calgary’s history,” Hanson said. “We have never seen five people killed by an individual at one scene. The scene was horrific.”

Hanson said the victims were all “good kids” in their twenties. Neither they nor the suspect had any prior involvement with police, said Hanson.

The chief also said there’s nothing to indicate the suspect was drunk or had been doing drugs.

He was arrested with the help of the police canine unit and taken to hospital, where he was treated for dog bites.

Charges of first-degree murder were likely to be laid against the man later Tuesday, Hanson said, and at that time his name would be released.

The blue-sided house where the stabbing took place is on a quiet, tree-lined residential street. It was surrounded with yellow police tape as three bodies were carried out on stretchers.

Neighbour Doug Jones said about a dozen students had been drinking beer around a firepit in the backyard earlier in the night, but they weren’t rowdy. They were talking about politics and the stock market. They took the party inside at about 9 p.m. and he heard nothing after that.

Other residents in the area said the party stemmed from the student union’s annual Bermuda Shorts Day, which was held Monday. The event, shortened by students to BSD, is an annual outdoor party on campus featuring live music and beer gardens to celebrate the end of classes.

The school’s student newspaper, The Gauntlet, wrote about the tradition two weeks ago in a story titled “BSD: It’ll be a bloodbath.”

On Twitter, many students wrote about how they starting drinking early in the morning Monday and, when the campus event ended in the afternoon, they continued at parties elsewhere.

Trent Pattison wrote: “Sad that days that are supposed to be remembered as a fun great day will be remembered for the wrong reasons. #BSD2014.”

Calgary Mayor Naheed Nenshi took to Twitter to offer condolences. “Thoughts and prayers of all Calgarians are with the young people we lost this morning, their families, friends, and university community,” the mayor said.