Major portfolios, including finance, health, justice and jobs, are given to NDP backbenchers in the wake of five resignations over premier's leadership 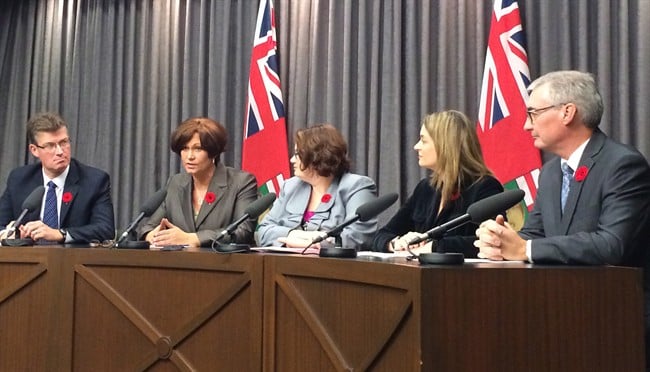 WINNIPEG – Five senior cabinet ministers in Manitoba resigned their posts Monday, saying Premier Greg Selinger has stopped listening to them and cares more about his own power than staying true to NDP priorities.

“In recent weeks and months it has become clear to us that he is increasingly being driven by his desire to hold onto his leadership rather than the best interests of Manitobans,” Finance Minister Jennifer Howard said.

“In recent months, it’s become clear that if you are in a position where you support the point of view of the premier, that your priorities and your projects move up the queue ahead of what was once a government plan and what would be indeed the priorities of Manitobans,” added Theresa Oswald, minister for jobs and the economy.

Struthers hinted Monday that the tax increase, which has caused the NDP to drop in opinion polls, was not his idea.

“What was our choice? We were going to vote against our own government? I wasn’t prepared to vote against a government that has done so much good work over the (last) 15 years for the people of Manitoba, so my vote was very much in the spirit of supporting the government I represented.”

All five ministers said they plan to stay in the NDP caucus and run in the next election, slated for April 2016. They refused to say directly how many other caucus members share their concerns, but Howard said the five did not act without talking to their colleagues.

“I think it’s been obvious in the last week that the concerns we have are not ours alone.”

The New Democrats have a majority with 35 of 57 legislature seats.

Selinger, who announced replacements for the ministers within hours, released a statement in which he referred to “direct” conversations he had with the outgoing cabinet ministers last week.

“I made it clear: either focus on the priorities of Manitoba families as a part of our team, or resign. I am saddened by the decisions they’ve made. I wish to thank each for their contributions toward building a better province.”

Selinger’s chosen replacements are much less experienced. Longtime backbencher Greg Dewar was named finance minister. Sharon Blady was moved from the junior portfolio of healthy living to health. James Allum, a rookie member and education minister, was moved to justice.

Kevin Chief, another rookie who headed the small department of children and youth opportunities, was named jobs and economy minister. Drew Caldwell, who served briefly in cabinet a decade ago, was elevated from the backbenches to become minister of municipal government.

The revolt erupted Oct. 27 when the ministers suggested Selinger should think about his future, given the NDP’s drop in opinion polls. Numbers over the last year suggest the party is well behind the Opposition Progressive Conservatives.

The public voicing of discontent has raised questions over how long Selinger can remain at the helm. Many of the other cabinet ministers and backbenchers have so far straddled the line, saying they support both the premier and the rebel ministers. When Selinger first reacted last week, however, less than half the caucus stood beside him at a news conference.

The party’s annual convention is set for March and a leadership review could be proposed. The resigning ministers have talked about party “mechanisms” to deal with the leadership issue.

More immediately, Selinger will have to recall the legislature at some point with his new ministers to face the Opposition. The legislature normally reconvenes in mid-November for a throne speech, which lays out the government’s agenda for the coming year. Selinger and his staff have not promised a fall sitting this year.