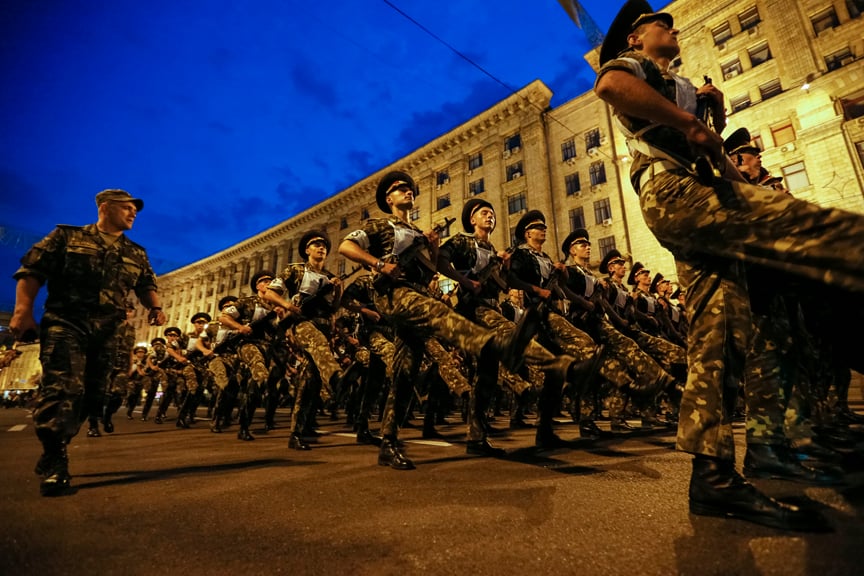 Canada appears set to join a U.S.-led mission to help trail the Ukrainian military. A defence source says training troops – possibly morre than 100 – are expected to be housed at an existing NATO training centre in western Ukraine near Poland. The troops would join American and British soldiers, likely in mid-May.

More testimony is expected today from a Senate human resource officer at the trial of suspended Sen. Mike Duffy. Sonia Makhlouf was questioned Monday about contracts allegedly awarded to a Duffy’s friend for research and consulting work. Duffy faces 31 charges of fraud, bribery and breach of trust.

The Supreme Court of Canada is to rule this morning on another plank in the Harper government’s tough-on-crime agenda. The court is deciding two appeals involving mandatory minimum sentences for gun crimes. In 2013, the Ontario Court of Appeal labelled the law cruel and unusual and struck it down.

India’s prime minister arrives in Ottawa this evening for a three-day visit. Narendra Modi’s visit will be the first to Canada by an Indian prime minister since Indira Gandhi in 1973 when Pierre Trudeau was prime minister. The PMO bills this as a chance to broaden trade with India in education, energy and science and technology.

TWO SCIENTISTS RESIGN OVER LACK OF NOMINATIONS FOR WOMEN

Two female researchers who help find the top scientists in the country have stepped down from their duties to protest lack of recognition for women in the field. Judy Illes and Catherine Anderson resigned from the selection committee of the Canadian Science and Engineering Hall of Fame this month.

– Most of Canada’s premiers and territorial leaders meet in Quebec City to discuss climate change.

– Ontario Finance Minister Charles Sousa will meet with the media to discuss his plan for the upcoming provincial budget.

– The winner of the Glenn Gould Prize, which honours living laureates from a variety of creative disciplines for their body of work, will be announced in Toronto.