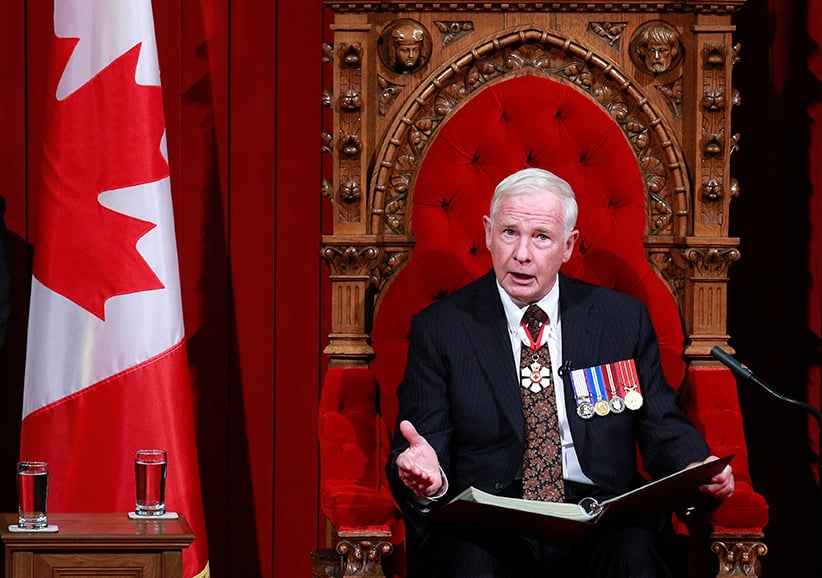 Canada’s Governor General David Johnston delivers the Speech from the Throne in the Senate chamber on Parliament Hill in Ottawa October 16, 2013 – (Blair Gable/Reuters)

THRONE SPEECH TO SET OUT PRIORITIES

The new session of Parliament kicks off in earnest today with the speech from the throne. The speech, to be read by Gov. Gen. David Johnston, is expected to address reconciliation with Canada’s Aboriginal Peoples as one of the government’s central commitments. Indigenous Affairs Minister Carolyn Bennett says she believes it is clear Prime Minister Justin Trudeau has signalled this “is the most important relationship to him and to Canada.

The Trudeau government has unveiled its plan for transforming the Senate into an independent, non-partisan chamber _ the first major reform to the scandal-plagued upper house in 50 years and arguably the biggest change since its inception in 1867. Democratic Institutions Minister Maryam Monsef announced the creation of an arm’s-length advisory board to consult widely and recommend to the prime minister a short list of five merit-based nominees to fill each vacancy in the Senate.

Jurors considering the fate of a Quebec man accused in the deaths of his two children continue their deliberations today. The jury has spent four days looking at the evidence against Guy Turcotte. He is charged with first degree murder in the 2009 stabbing deaths of his children. He has acknowledged causing the deaths but his lawyer has argued Turcotte is not criminally responsible due to a mental disorder.

The University of British Columbia has hired a former judge to investigate “serious allegations” against suspended creative writing chairman Steven Galloway. Mary Ellen Boyd, a former B.C. Supreme Court judge, will investigate the allegations. The university announced on Nov. 18 that Galloway had been suspended with pay pending an investigation into unspecified allegations it called “serious.”

The unemployment numbers for last month will be released Friday morning. Canada had a net gain of 44,000 jobs in October, which helped trim the national jobless rate from 7.1 per cent to seven per cent.