In the news today: More information expected today after a double stabbing of military members in Toronto 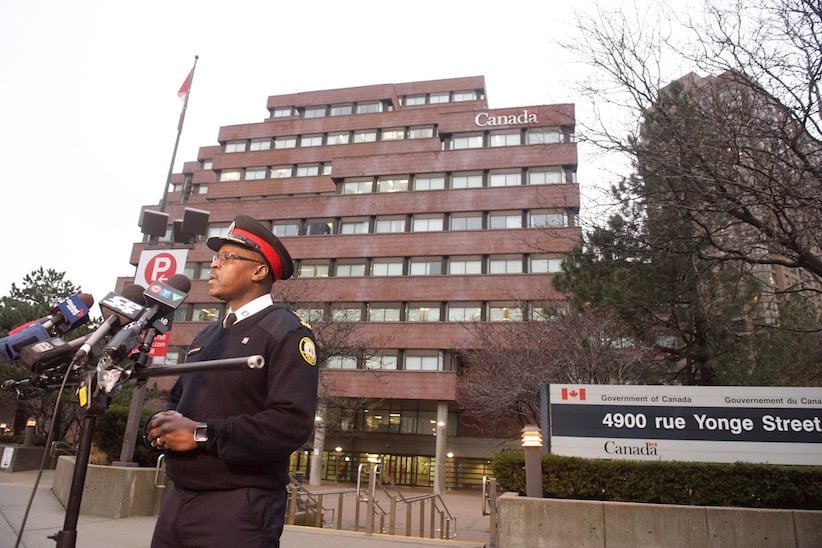 Toronto Police Chief Mark Saunders at a military recruitment centre in Toronto where a man walked in, pulled out a knife and attacked a uniformed Canadian Forces member. (Victor Biro, CP)

A man arrested after a double stabbing of uniformed military members at a Toronto recruitment centre will soon appear in court. Police have released few details about the incident, but say the attacker made unspecified comments that have led them to look into a possible terror connection. They say the unnamed man walked into the centre in north Toronto on Monday afternoon, pulled out a knife and attacked a uniformed Canadian Forces member.

Others in the room were able to take down the suspect but a second Canadian Forces member was stabbed in the process. Neither soldier has life-threatening wounds.

Police Chief Mark Saunders said the alleged attacker’s comments have caused them to suspect a terror link. He’s scheduled to hold a news conference later this morning to discuss the incident. Public Safety Minister Ralph Goodale said it appears to have been an isolated incident and “there is no imminent threat to public safety.”

Newly released figures show jobless Canadians are waiting days for answers to their employment insurance questions, and a month or more to find out if they are going to receive benefits. The figures tabled in Parliament last week show 297,586 employment insurance applicants waited more than 28 days for a decision on their files.

A Montreal march against perceived police brutality is set to take place tonight. Organizers are inviting people to a picnic a few hours before the protest starts at 8 p.m. eastern.

Leaders of three Saskatchewan First Nations say they are declaring a health crisis, citing a three-year spike in deaths due to violence, addictions and health issues. The Keeseekoose, Cote and Key First Nations hope their declaration will prompt the Sunrise Health Region and the federal and provincial governments to meet with the Saulteaux Pelly Agency Chiefs Health Alliance to discuss a plan of action.

Valeant Pharmaceuticals will try reassure investors this morning as the embattled drug and health-care products maker finally releases its long-delayed quarterly results. After a two-month medical leave, CEO Michael Pearson has vowed to update shareholders on the company’s “progress” and outlook for the coming year by releasing preliminary fourth-quarter results.