In the news: The Weeknd, Saskatchewan voters, the Leap Manifesto, and Cold-fX 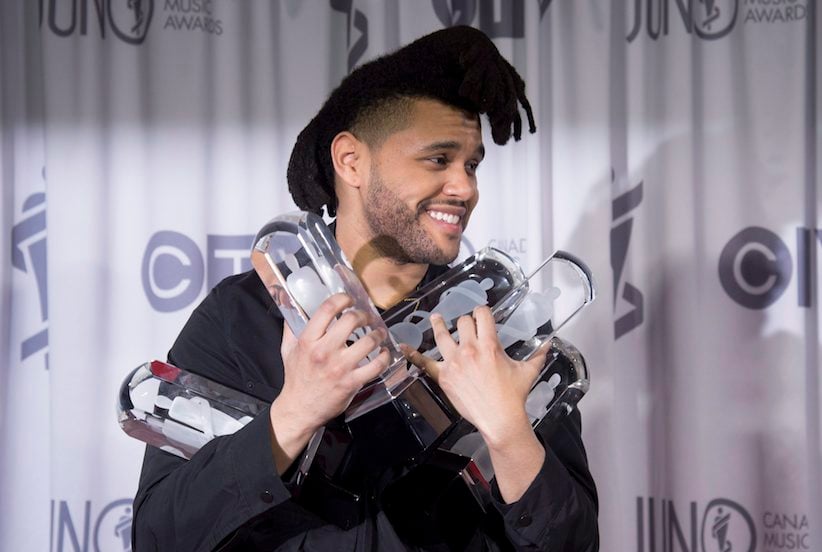 The Weeknd and his five Junos. (Jonathan Hayward, CP)

BIG JUNO WEEKEND FOR THE WEEKND

Toronto-born superstar The Weeknd snagged five Juno awards — three at a gala in Calgary on Saturday night and two more during last night’s televised show. Other winners included Alessia Cara for breakthrough artist of the year, Justin Bieber claimed the fan’s choice award and pop album of the year prize, Dean Brody won country album of the year and former Guess Who frontman Burton Cummings was inducted into the Canadian Hall of Fame for his solo work.

VOTERS HEAD TO THE POLLS IN SASKATCHEWAN

It’s election day in Saskatchewan, where the 27-day campaign featured few spending promises and lean party platforms. It’s widely considered to be a two-way race between the incumbent Saskatchewan Party, led by Brad Wall, and the Opposition NDP, under Cam Broten. Wall is seeking a third-term in office, while this is Broten’s first election. Wall’s party won 49 of 58 seats in the legislature in 2011, leaving the NDP with just nine.

The federal NDP will be holding their annual convention in Edmonton this coming weekend, and there’s likely to be a lot of talk about something called the Leap Manifesto. It’s a dramatic plan for change that includes a call to shift Canada off fossil fuels. The policy blueprint is designed to be non-partisan and has a wide range of supporters, including actors, labour unions and environmentalists. Nearly two dozen NDP riding associations are urging members to embrace the plan following the party’s crushing loss in the last election.

The maker of the popular cold medication Cold-fX is in court today trying to head off a bid for a class action suit. Vancouver Island resident Don Harrison is asking a BC court to certify a class action suit against Valeant Pharmaceuticals over its advertising that Cold-fX offered “immediate relief of cold and flu” if taken over a three-day period at the first sign of symptoms. Harrison alleges Valeant knowingly promoted the remedy despite evidence it only had a possible positive impact after being taken daily for prolonged periods. The allegations haven’t been proven in court.

Although it’s not clear they’re cost effective, some cash-strapped Canadian police forces are moving ahead with equipping officers with body cameras. The camera programs aren’t cheap and require hiring more personnel to deal with the thousands of hours of footage. There are also concerns the videos invade the privacy of citizens. But proponents say the cameras provide better evidence and lead to more convictions.