They need a team of keepers, baby bottles, an incubator and even assistance to pee. Check out the panda bears' diva-like necessities. 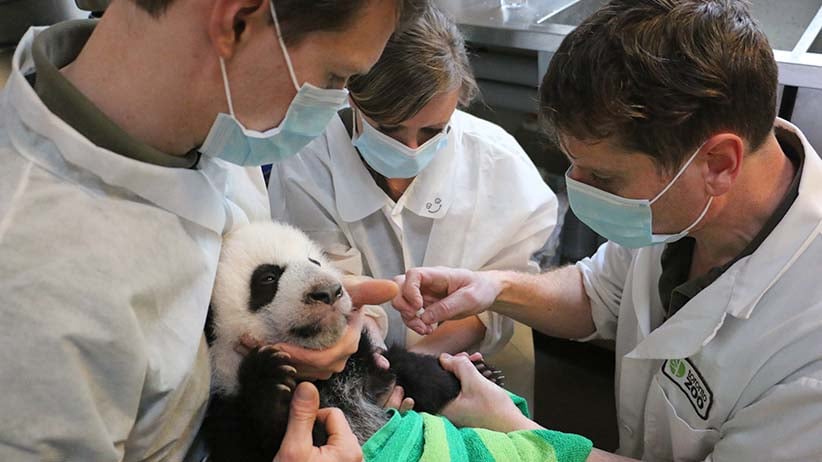 Zookeepers provide a health check to one of the Giant Panda cubs. (Toronto Zoo).

Jia Panpan and Jia Yueyue, the Toronto Zoo’s new panda cubs, are finally on exhibit to the public. At nearly six months old, the celebrity pandas debuted on Mar. 12, just in time for Ontario’s March break. As Maclean’s explains in an exclusive look behind the gates, the public frenzy hardly seems extreme compared to the effort expended on the birth and raising of these cubs. As the pandas spend their first five days on display, here are the five most interesting details about the coming of the cubs, a highly intensive project made even tougher by the specific challenges of the species.

1. Keepers sneakily swapped twins in and out of the mother’s arms

In the wild, pandas are always raised as only children. When a female gives birth to twins, she chooses the stronger cub and either abandons or accidentally crushes the smaller one. So in order for the Toronto Zoo to ensure equality, for the first four months, seven panda keepers, working eight-hour shifts around the clock, performed a process called “twin swapping.” One or two keepers would approach the mother, named Er Shun, from the back and hold a steel bowl of honey to her face to occupy her mouth. Another keeper would feel around in Er Shun’s arms and pull out the cub. The keepers would weigh the cub to check that it had drunk enough milk, then shortly afterwards hand Er Shun the twin. Er Shun may have known all along that she had two different cubs, but she put up with the twin swapping for the love of honey. She now spends time with both at once.

2. Females can only get pregnant for one to three days per year

One of the main reasons why pandas are so endangered (with just 1,868 left in the wild as of the last census), is because the females have only one shot per year to get pregnant. For the first two years at the Toronto Zoo, Er Shun didn’t want to mate with the male panda on site, Da Mao. Instead, the zoo had to electro-ejaculate Da Mao, as well as ask the Chengdu Research Base of Giant Panda Breeding in China to send sperm overseas. The process wasn’t simple …

After Chengdu agreed to electro-ejaculate two male pandas and send the sperm to Toronto, an artificial insemination expert sealed the sperm in a canister of nitrogen vapour, with a layer of egg yolk to protect the sample from the vapour. An expert tried carrying the tank as carry-on because it was too delicate to check beneath the cabin. Not surprisingly, the luggage raised flags to the Beijing airport security, and the expert didn’t make it on the flight. The Canadian ambassador to China sent an officer to resolve the security issue and book the expert on a flight the next day. He arrived in Toronto around midnight on a Friday, and Er Shun hit her fertility window two days later. The keepers had been monitoring her hormones with urine samples, so they knew exactly when to put her to sleep and inseminate her. Months later, the cubs were born, and the parenting began.

4. Cubs can’t pee by themselves

Pandas are born after just 45 days in the womb, so underdeveloped that their genders aren’t even apparent. In the wild, mothers have to lick around their cubs’ genitals to stimulate them to pee or defecate, but since Er Shun only has one cub at a time, the Toronto zookeepers often have to stimulate the cubs themselves. The keepers hold the cubs in their laps, rub around their bottoms with their fingers, and aim the bears’ bums over a garbage can.

Because Er Shun doesn’t have enough milk for both twins, the panda keepers supplement them with a mixture of human baby formula, Enfamil A+, and puppy formula, measured with a recipe from China. The keepers hold the cubs in their laps and let them suckle on a warm baby bottle. (The cubs are now being introduced to bamboo, but their mouths aren’t yet strong enough to eat it.) Since pandas are born so vulnerable—at just one-900th the size of their mother—the cubs spent time in a human incubator donated by the SickKids hospital. They then graduated to a playpen with foam kiddy mats, and in the future they’ll get to climb a children’s playground, which sits outside the panda house with the yellow slide removed.  As the zoo’s reproductive specialist Gaby Mastromonaco explains, “soon they’ll be running around like rambunctious toddlers.”