Fleeing Fort McMurray: The stories of those who left 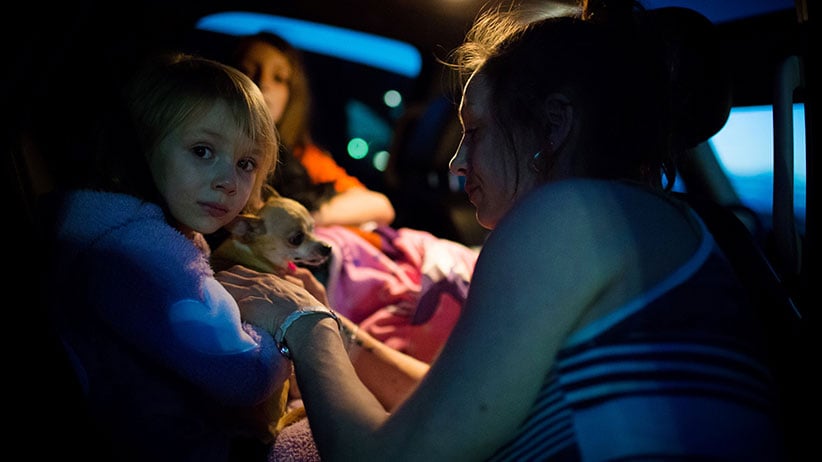 Fort McMurray resident Crystal Maltais buckles in her daughter, Mckennah Stapley, as they prepare to leave Conklin, Alberta, for Lac La Biche after evacuating their home in Fort McMurray on Tuesday May 3, 2016. (Topher Seguin/Reuters)

Tens of thousands of people have fled the wildfire that has ravaged parts of Fort McMurray, Alta. Here are some of their stories:

Dustin Shillolo, 29, linked up with a group of friends and rode out of town in a truck.

“We were stuck on the highway and we could see the flames of the forest fire coming toward us. I’m thinking to myself, ‘Well, here we are in a back of a truck going nowhere fast.'”

Shillolo said he saw terrified people trying to bike away from the scene. He said his group made it about 10 kilometres south of town before running out of gas.

On Wednesday morning, he was stuck at a staging area waiting to refuel. He said the highway nearby had all four lanes going southbound.

“I must have stayed up till 3, 4 o’clock in the morning last night just standing there watching the headlights, and it didn’t stop. For hours, it didn’t stop.”

Shillolo said he has been amazed by the generosity of the community.

Shillolo, a labourer living in Fort McMurray, said he believes his home is safe at the moment, but he recognizes that could change at any moment.

“If there’s something to go back to, I’ll go back. I have enough stuff on me that if I didn’t want to go back I guess I wouldn’t have to, but I probably would.”

Jay Telegdi said he and his roommate were watching smoke from the fire from an overlook on a ridge in the Abasand area of Fort McMurray on Tuesday when they first realized how serious the threat was.

“We saw the flames jump up over the ridge to the other side,” said Telegdi. “We saw the fire creeping down the hill, so it was, OK time to go.”

He said smoke started rolling into the neighbourhood as they packed up their two cars to leave the area near their home in bumper-to-bumper traffic.

As Telegdi drove he said he noticed clusters of people dragging what possessions they could along the side of the road until some were picked up by passing vehicles.

“You just started seeing abandoned suitcases as people just dropped what they had and hopped into a car or a truck,” he said. “Honestly it seemed like the beginning of Dawn of the Dead — sirens, smoke, people running all over the place.”

Telegdi said he made it to a friend’s place near a river south of the town where he and a couple of others were picked up by a tour helicopter that was circling in the area and taken to the town’s airport.

From there he rented a car and made it down Highway 63 to Edmonton where he had previously booked a hotel.

Telegdi, who works in government relations for the local Metis community, said he wonders whether his home survived in what was an area hit hard by the fire. 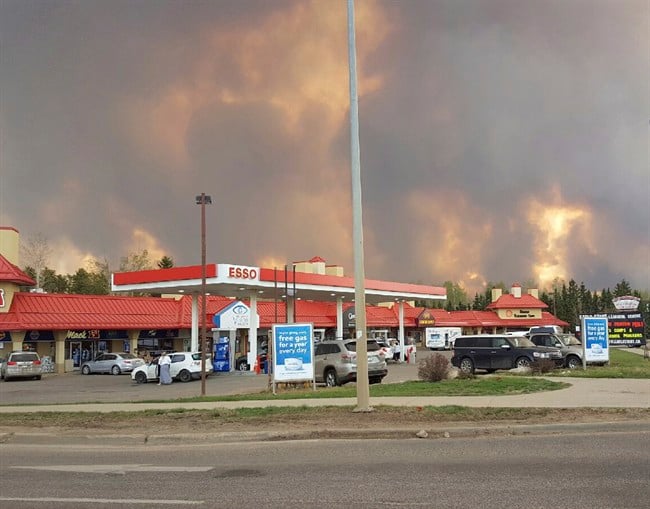 A wall of fire rages outside of Fort McMurray, Alta. Tuesday May 3, 2016 as a wildfire threatened the city. Raging forest fires whipped up by shifting winds sliced through the middle of the remote oilsands hub city of Fort McMurray Tuesday, sending tens of thousands fleeing in both directions and prompting the evacuation of the entire city. THE CANADIAN PRESS/ Mary Anne Sexsmith-Segato

Hunter Lawrence-Carr, 18, is a high school student from Fort McMurray. When he was in school, he saw students starting to get texts from concerned parents telling them to get moving.

“By the time class ended they’re trying to settle everyone down in school and stuff, and I just said I had to go home and had to get my dogs ready, get everything packed up, get ready for my parents to come home and get ready to leave.

“We didn’t realize how serious it was until we went out to the parking lot and the sky was orange. You could feel the heat radiating just from the smoke alone. It’s still surreal just trying to think about it.”

Lawrence-Carr didn’t wind up leaving until 9:30 p.m. Tuesday night and said it took a couple of hours to make it out of the city limits. He left the city with his mom and three dogs. He could see flames in the rearview mirror as they drove out of town.

He was en route to Edmonton on Wednesday morning when he talked to The Canadian Press. His stepfather is a supervisor at the municipal wastewater plant, which is deemed an essential service, so he was still in town.

He has been in touch with his close friends and they’re safe.

“My main concern, a worry to me was maybe if the fire was to head north towards the camps where they put everyone. I guess you can never tell that stuff, but it’s just a worry in the back of my mind that creeped in I guess as you think about all these different scenarios and stuff.”

Steve Jenson was at work at a car dealership Tuesday when he first realized the gravity of the situation.

Jenson said the grass had caught fire near the divided highway next to the dealership and flames were clearly visible.

“You could feel the heat on your face as if you had just gotten a sunburn,” said Jenson.

Jenson, who lives in the Timberlea subdivision, said once the evacuation order was given it was a matter of making it home to get his dog before trying to head north to get out of town.

He said traffic was so bad it took three hours to move one kilometre — a frustrating journey that was compounded when he stopped at the only gas station open in town.

“The one I went to initially lost power as I was trying to do my transaction,” said Jenson. “I had to change vehicles so I left my car and jumped in my truck.”

Jenson, a friend and his English Mastiff Darwin, headed north for about 60 kilometres when they realized Highway 63 heading south was open to traffic so their plans changed.

On Wednesday, Jenson was still slowly making his way south toward Edmonton where he will stay with a friend.

“There are hundreds of vehicles abandoned on the side of the highways,” he said. “People are out of fuel all over the place.”

Chris Evangelista, 30, is a pastor in Fort McMurray who is originally from Toronto. He said it was a beautiful day Tuesday when he woke up and thought the fire was well under control, but later things changed.

“Literally just in … (the) hour that I was at lunch, things deteriorated really crazily. When I walked out of the building there was a huge cloud of smoke over the east side of downtown…. That was really our first sign.”

Evangelista had to be in Edmonton for a conference later this week. He decided to bump up his travel plans and head out on Tuesday.

As he was trying to get on the highway, he saw a wall of flame three to five meters away from him. He shot some video.

“I just couldn’t believe it was really happening. It was really only an hour later … where I was kind of processing things and I realized actually I’d done some pretty crazy, dangerous things just now.”

Evangelista said he did not feel fear at the time of shooting the video, though he could feel the heat. “It was only later on when I had a chance to reflect that I was like, ‘Wow, that was pretty dangerous.'”

He said it took him about two hours to get out of town.

His house is next to the church where he works and he doesn’t know if either building is safe. Evangelista, who spoke to The Canadian Press from a hotel in Edmonton, said he expects the church will have to help people when life returns to normal.

“Everyone’s really evaluating. We know there are some neighbourhoods that are pretty much gone, and we know that some of our congregation members are from that neighbourhood. There are definitely people from our congregation that are going to need help, . . . but that might not even be the extent of the damage.”

Paul Newman is a resident of the Timberlea subdivision, where he said at least 12 trailers had burned down.

Newman, who works as a surveyor, said Tuesday began as any other with a trip to the local gym to work out.

“When I walked out of the gym is when I noticed the flames and smoke looked a bit more serious, so I started to consider packing a bag,” he said. “It was a few hours later after that I was really wishing I had left much earlier because we were stuck in traffic.”

Newman said it took at least 90 minutes to get to nearby Highway 63 to begin the trek out of town.

“We honestly weren’t sure if we were going to get out of Timberlea because everybody started driving like maniacs. Driving eastbound on the westbound lane . . . driving down sidewalks and a lot of the roads were blocked for emergency vehicles.”

Newman said he and a roommate made it to Calgary, where he has family and friends, around 4 a.m. Wednesday.

“We’ll wait it out here and hopefully I can return to my home sometime in the next couple of days. Hopefully I still have a job and a lot of people still have jobs and don’t lose their homes.”

–From Michelle McQuigge in Toronto and Keith Doucette in Halifax