Floodplain living isn't a luxury. It's a reality we have to deal with. 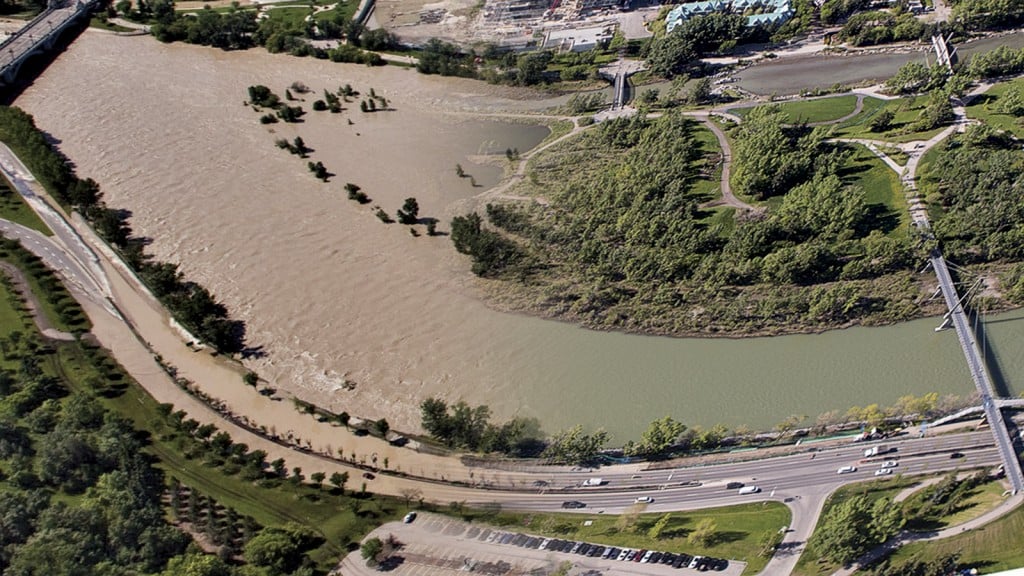 The Bow River over flows its banks into the downtown core and residential areas in Calgary, Alberta June 22, 2013. The heaviest floods in decades shut down the Canadian oil capital of Calgary on Friday, forcing the evacuations of tens of thousands of residents and shutting the Alberta city’s downtown core. Some 1,300 troops were deployed to help with rescues and the mandatory evacuations that forced 100,000 people from their homes in Calgary and thousands more in the small towns surrounding the city. (Andy Clark / Reuters)

By the middle of July, in 2013, I had had enough of watching my friends and neighbours struggling to recover from a huge flood that affected people living near the Bow and Elbow Rivers. Families were displaced, emergency funds were running low, homes had been destroyed, and the government didn’t seem to understand that people expected a plan that was more detailed than throwing a few dollars at folks.

I sent an email to this effect to my neighbours, and it went viral in my community; a week later, I was hosting a hot and muggy town hall with more than 800 flood victims. At that meeting, we formed the Calgary Rivers Community Action Group (CRCAG), and in true Alberta fashion, we decided we needed to manage our own recovery and figure out how it was we could stop our city from being devastated again. Our advocacy is ongoing: I wound up working in Jim Prentice’s Premier’s Office as a result, and the work has produced positive outcomes for many—outcomes that will save all of us a lot of money and a lot of grief.

So it’s with dismay that I read Scott Gilmore’s column “It it time we stopped paying for your river view,” which repeats an offensive narrative that those of us who have lived through the flooding of our entire city centre have heard over and over again. We don’t want to pay for your pretty river view. You people who live by the river should know better.

This narrative blames regular families across the country for the centuries-old development of some of our major centres, poor collective planning decisions, a lack of overland flood insurance in Canada, and a failure by multiple levels of government to address necessary mitigation measures. It also assumes people are fine being flooded and just want a government payout here and there.

This is wrong. And to publish this at a time when so many Canadians are traumatized is heartless.

Our homes were flooded in 2013, but they weren’t all that was affected: at the same time, Calgary City Hall, the Saddledome, our underground transit system, the zoo, a large portion of the downtown core—they were all hit by the floods. You see, back in the late 1800s, Calgary was founded at the confluence of the Bow and the Elbow. Like most major cities around the world, the river was the lifeblood of the Calgary community; for well over 100 years, we built the city out from this river junction, though the heart of the commercial core of Calgary, and many of the city’s historical neighbourhoods, was built on a floodplain.

Albertans aren’t keen on asking for handouts: We look after each other, and we pull ourselves up by our bootstraps. Calgarians banded together and set about rebuilding, and only a handful of homeowners were offered buyouts. For many, there was not nearly enough, if any, insurance coverage; disaster relief paid pennies to the dollar. Everything people have worked for is often tied up in their home—it is an investment, your shelter, your community and your heart. It’s been four years since that huge flood, but people here are still, in a way, in recovery mode.

At CRCAG we set about learning more about our flood risk, insurance (or lack thereof), disaster recovery programs and what could be done to prevent flooding. We didn’t want to repeat the cycle of flood, repair, repeat. We want to make sure people are safe in their homes and protected from flooding where possible, or treated fairly if it isn’t possible and are not blamed for flooding events.

What we learned scared and inspired us.

The risks were greater than what we had been led to believe. The insurance coverage available was minimal or prohibitively expensive—insurance is a business, and overland flood insurance was not even available to homeowners when the 2013 flood happened. When it was available, it was for commercial policies, not residential. That has changed, but companies are now offering residents coverage at tens of thousands of dollars a year. For many, it is an impossible expense.

Of course, one of the criteria for applying for Disaster Relief Funds is that insurance was not available. Is something that is technically available but beyond the reach of most homeowners actually really “available?” Or do you leave those who need help the most in the lurch?

Our research showed us that governments had known for decades what the risks of flooding to major centres were, but periods of drought and lack of interest in spending on preventative mitigation projects had left entire communities and cities at risk. We have old rotting infrastructure in many of our cities and towns across this country and sewage systems that can’t handle the pressure they are under. It has been suggested that this situation exists because federal disaster relief offers cities an excuse not to build flood barriers, but we haven’t actually seen enough of these incidents to make that assumption—and that is actually deeply cynical.

Yes, bad infrastructure and sewage systems are expensive, and are a huge problem. So we need to spend money on prevention.

We’ve learned that mitigation for both older and newer communities is possible—especially communities smack in the middle of the downtown core of one of Canada’s economic engines. There is loud but limited opposition to proposed projects such as the Springbank Offstream Diversion Project, and while we wait for regulatory approvals, we hope that this year the snow melts slowly and the torrential rains don’t come. We learned from places such as the Netherlands and Winnipeg: You can build sustainable flood mitigation projects that will protect time and again and save billions in recovery. But it takes government will, and years of regulatory processes.

Different solutions are warranted for different situations. In undeveloped areas that are subject to flood risk, there should be no development. But that’s no longer possible for communities where the fateful decision to locate to what we now understand to be high-risk areas was made, in many cases, a century or more ago. In those areas, it is better to build a big off-stream reservoir to protect an entire downtown core rather than spend tens of billions of dollars to move downtown. We can build berms and dykes to protect smaller communities. We can rethink how we protect and live with our watersheds to prevent further erosion, and how we manage all future development with a mind to flooding and water table issues.

Infrastructure is built for the benefit of whole communities. Roads, transit, bridges, tunnels, schools, hospitals, and major sporting and entertainment venues: we all pay for these things, and at times in our lives we use some of them more than others. It is time that we make the necessary investments in protecting our cities from flooding—and that has nothing to do with fantasies of wealthy folks sipping mint juleps, taking in their river view.

Ottawa, Montreal, Toronto and Calgary aren’t going to be moved away from the water, and the damage to public property itself justifies the case for the mitigation measures. Although homeowners have an obligation to obtain adequate insurance, our experience has been that overland flood insurance is not widely available in Canada for a reasonable price. Imposing prohibitive costs on homeowners who already live in the heart of our largest cities is akin to de facto expropriation.

No one wants their home to flood or for their workplaces to be shuttered for months. No one wants to take disaster money. They just want it to not happen again. Stoking a divisive narrative that shames and blames Canadians for our collective poor planning is unfair and cruel.

Emma May is a director of the Calgary River Communities Action Group and the co-founder of Charles Real Estate.