Flying on your own, the Alberta Conservative way 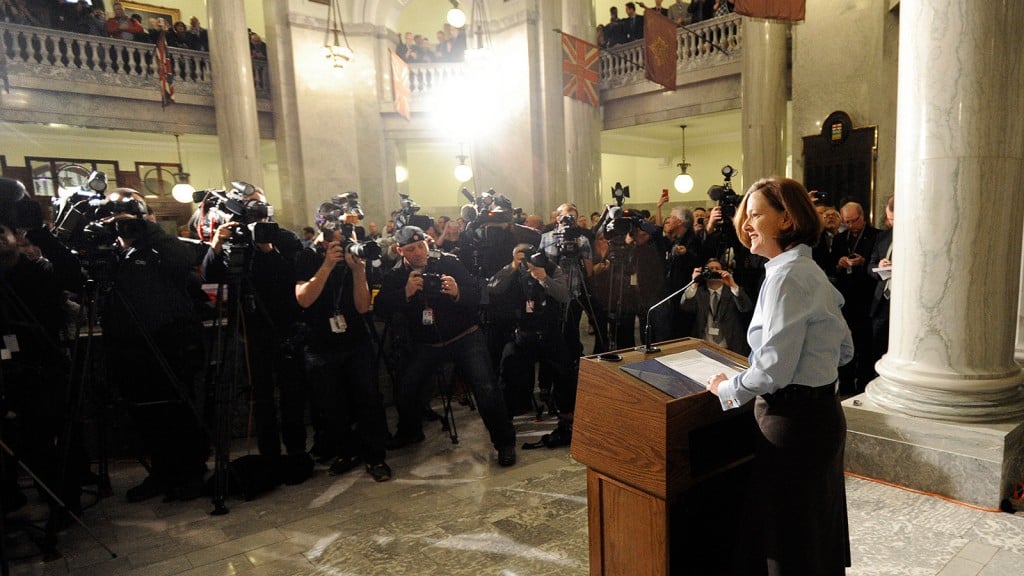 I was pretty sure the press had squeezed the last ounce of public entertainment out of ex-premier Alison Redford’s outrages against the Alberta treasury. Her attempt at constructing a secret premier’s residence in Edmonton’s Federal Building was always going to be hard to top, and, for brazen North Korea-esque megalomania, it still takes the cake. But just when you think the CBC’s investigative team of Rusnell & Russell have served their last scoop, there’s suddenly a waffle cone in your hand, shedding chocolate dip and sprinkles all over the place. [Enough dessert metaphors. Do you need a cookie? -ed.]

The pair has got hold of a draft report by Alberta’s Auditor General that adds a shocking new twist to the tales of government aircraft abuse already written into the Redford legend. Redford’s staff, according to Auditor General Merwan Saher’s report, apparently made a habit of ensuring that the premier would not have to fly in the same aluminum tube as civil servants (ew!) or other MLAs (God no!) by faking flight bookings—adding fictional passengers in order to crowd persons with official business out of the empty seats, then removing the names when the manifest was printed out.

Redford and her last chief of staff, Farouk Adatia, are denying any knowledge of the practice. In the report, Saher says the accusation was supported in interviews both with the premier’s own staff and with “multiple staff” from the Treasury Board. In other words, it does not seem to have been the world’s best-kept secret, even if the details were actually kept from the premier, whose ethical lapses have shared a weird theme of paranoia and isolation. (Her Federal Building hideaway was to include “sleeping and grooming quarters with clothing storage for an adult and one teenager.”)

The new revelation about Redford’s cavalier use of government aircraft is on an echelon of seriousness above the previous ones, since it involves the active falsifying of government data—and data that pertain to aviation, at that. That seems like the kind of thing that might get the police interested in a breach-of-trust case, and maybe Transport Canada would have a thing or two to ask about it, too. (Or maybe totalitarian air security is just for peons, and federal regulators are totally cool about air carriers screwing around with their own records.)

The leaders of Alberta’s Wildrose and Liberal parties called for an RCMP investigation into the faked passenger lists, as did PC leadership candidate Jim Prentice. Rival Ric McIver mentioned “proper authorities,” but fellow candidate Thomas Lukaszuk used a little more PC-style finesse, saying that as premier, he would ask an “independent legal expert” to review “expenses and travel arrangements” made by Redford and her staff. “I’d pick up the phone and call the cops” was apparently not the preferred answer to this mini-quiz.

Lukaszuk added that he would consider ejecting Redford from the Progressive Conservative caucus, helpfully reminding us that she is still the Progressive Conservative member for Calgary-Elbow. The Wildrose Party and the NDP have gotten nominations underway for the anticipated 2016 election, but the PCs have yet to start their process. It was a bit of a surprise that Redford did not resign from the Assembly when she stepped aside as premier in March, and the surprise surely grows with each passing day. It hardly seems credible that Redford can continue to live in Alberta, much less work in any position involving more responsibility than a Slurpee machine, but perhaps she is clinging to Elbow as a last lone bargaining chip.