Food fight in Ottawa spurs hope in the North

With fresh attention on an old problem, Nunavut is hopeful things may finally change — albeit slowly. 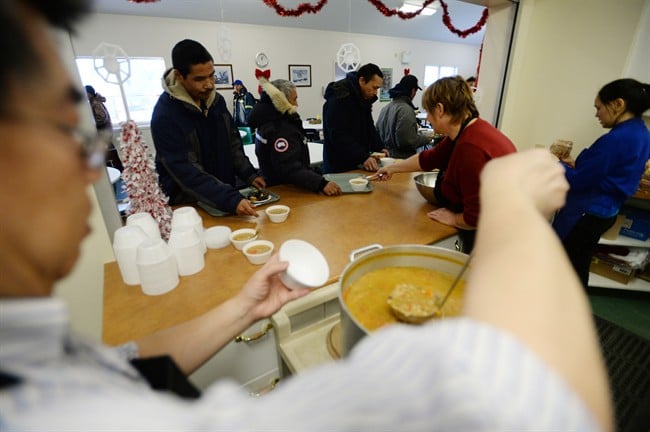 IQALUIT, Nunavut – The line-up for Iqaluit’s soup kitchen stretches out the door, down a flight of wooden steps and onto the icy street. Dozens of people wait patiently in -40 C cold, braced against the gusting shards of wind.

Inside, Cathy Sawer stirs an industrial-sized pot brimming with chicken soup, enough for 200 servings. The 65-year-old and her fellow volunteers have been in the kitchen since 8 a.m., preparing a lunch that will be the only meal of the day for many of those waiting outside.

“You wish you could always do more, but there’s only so many hours in a day,” Sawer said.

Nunavut’s long-standing struggle with sky-high food prices and widespread hunger has prompted intense scrutiny of late for both the federal and territorial governments. Protests have popped up across the territory; even the UN has weighed in.

In the wake of a November report from the federal auditor general critiquing the government’s food-subsidy program, footage emerged of Rankin Inlet residents foraging in the town dump, triggering howls of outrage in the House of Commons.

In the middle of it all was the government’s Nunavut MP, Environment Minister Leona Aglukkaq, who at the height of the controversy was plainly seen reading a newspaper in the Commons instead of fielding questions about the food problem.

Aglukkaq, who eventually apologized, insists hunger in the North has been exaggerated. But there’s a sense in Nunavut that with all the fresh attention on an old problem, things may finally change — albeit slowly.

“We have some momentum on this issue,” said Ed McKenna, director of Nunavut’s Anti-Poverty Secretariat. “But it’s going to take time to see that translated to concrete work.”

Food insecurity — defined as a lack of access to healthy, affordable food — is not a new phenomenon in Nunavut. Even the traditional Inuit diet of caribou, fish, birds, whales, seal and berries left people vulnerable to hunger pains if they couldn’t find any plants or wild animals to eat. But the problem is as persistent as ever, despite decades of government programs, subsidies, a renewed emphasis on hunting, and community spirit.

“I grew up hungry, but not starving,” said Leesee Papatsie, who helped organize Nunavut-wide food price protests and started the “Feeding My Family” group on Facebook.

People turn to families and friends when they can’t put food on the table. Others go to Iqaluit’s soup kitchen or to the food bank on the two days a month that it’s open. Those who can, hunt.

And yes, some scour the local dump for scraps of food.

“There are people that sometimes go to our public meetings for the purpose of knowing that there’s going to be food and refreshments there,” said Madeleine Redfern, the former mayor of Iqaluit.

“There’s a lot of people leaning on their family or friends because they simply do not have enough food between every paycheque or between every social-assistance cheque. It puts a lot of pressure on other people’s families as a result. It’s very hard.”

The food bank, soup kitchen and other social services mean Iqaluit — located on the south coast of Baffin Island — is better off than Nunavut’s other, far-flung communities. The dump, on fire until just a few months ago, is fenced in to discourage scroungers.

But the capital is still a more expensive place to live than other parts of Canada. In the winter, everything must be flown in by aircraft. Cargo can also be brought in by boat, which takes longer but generally costs less, although the shipping season is limited because the water freezes.

The high cost of living has forced more and more families to turn to the local food bank. Stephen Wallick, chairman of the board of the Niqinik Nuatsivik Food Bank, said it started out in 2001 serving about 30 families. Today, he said, as many as 120 families come looking for food and supplies every two weeks.

In those 13 years, the sparsley populated territory has been expanding steadily. Eighty per cent of Nunavut’s 36,585 people are Inuit, and a third of them are under the age of 18, making it Canada’s youngest population.

At the same time, the employment situation has improved only marginally. Among the working-age population, just half have a job — about the same proportion as a decade ago.

A study released last year by the Caledon Institute of Social Policy found the number of welfare recipients as a percentage of the population is far higher in Nunavut — where it was 49.1 per cent at last count — than anywhere else in the country. British Columbia came a distant second, at 10.5 per cent.

That may help explain why more people are going to the soup kitchen and food bank.

“It’s reaching a small percentage of the total population here, but it’s those who are in need,” Wallick said. “It’s not really meant to be a replacement for their food source, just emergency and supplement.”

Food on store shelves is a bit cheaper than in the more remote communities, although hardly a bargain.

A two-litre jug of orange juice was selling for $26.29 at one local grocer; a four-litre bottle of milk was $10.39, with a sign advising shoppers it would be $20.91 without the federal Nutrition North subsidy.

The food bank itself is running hand to mouth — a sign of the strain on Iqaluit’s social services.

“We’re often running $20,000 behind, but you just trust that it’s going to come in, and it usually does,” Sawer said, “especially around Christmas.”

The 2014 Nunavut Food Price Survey found food prices across Nunavut dropped four per cent from last year. But people still pay an average of $16 for a kilogram of chicken in Nunavut compared to $7 in the rest of Canada. The average cost of 2.5 kilograms of flour in Nunavut is $13 — about $5 everywhere else.

The last Inuit Health Survey found nearly 70 per cent of Inuit households in Nunavut are food insecure — meaning they lack access to safe, healthy food. That’s more than eight times the national average and is among the highest rates for an indigenous population in a developed country.

So how does the territory tackle its food security problem?

A key recommendation of the Nunavut Food Security Coalition, made up of representatives from the territorial government, Inuit organizations, industry and social justice groups, was to encourage people to hunt.

Will Hyndman tried to do just that. The former Edmonton native started a hunter and trapper’s market in Iqaluit, and invited hunters — most of whom struggle to buy ammunition and fuel — to sell their meat in town.

“The goal was really to change the conversation about how we deal with country food here in Iqaluit,” Hyndman said, little icicles forming on the tips of his moustache, as he stood with his dog on the frozen shores of Koojesse Inlet.

“When you go hunting, you can’t take your fish and stuff it back down your gas tank. You can’t take your seal and turn it into more bullets, whereas traditionally everything came from the animals that you were hunting.

“So now we need to something else to close that loop of sustainability, and the market was one way to do that.”