For Canadians at a hostel in Peru, coronavirus has them trapped in their room

Ottawa is flying hundreds of Canadians home from Peru. These Torontonians fear they won't get help, stuck inside on quarantine for at least a month, maybe longer. 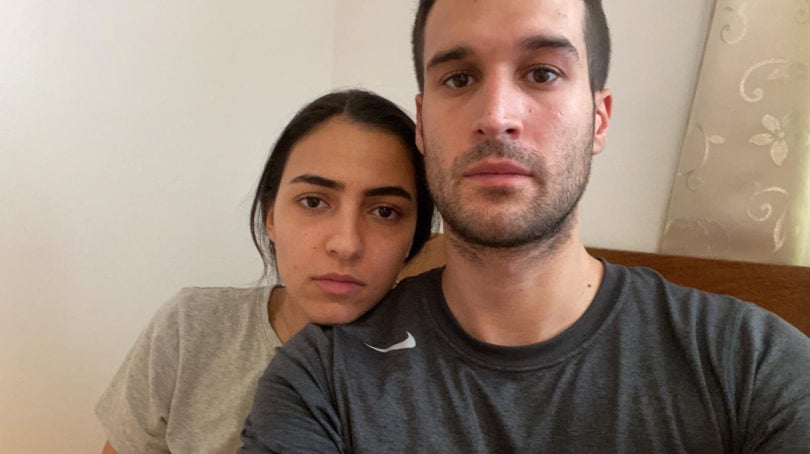 UPDATE, MARCH 31, 5 p.m. EDT: Days after feeling like they’ve been confined to their hostel in Cusco, Peru, for a 28-day sentence, Greg Bestavros and Marina Fanous have reason to hope. On Sunday night, the Toronto couple were among the dozens of Pariwana hostel guests moved across the street to a nicer hotel—a move done to limit the spread of coronavirus, which two other hostel guests have contracted. Bestavros and Fanous now have their own bathroom, and get served three meals daily to their door.

The pair have also been told that a doctor will visit them next week and will likely test them for coronavirus, 14 days after others in Pariwana tested positive. If they test negative, they may be able to access a Canadian rescue flight, Bestavros says. “We were very lucky to be moved out, and feel much safer and confident that we’ll be able to get home sooner,” he writes in a WhatsApp message.

Meanwhile, the federal government has been trying to assist all of nine Canadians who were staying at the Pariwana—four of whom didn’t get moved to the hotel. But Ottawa is constrained in what it can do, given the local quarantine order, Foreign Affairs Minister Francçois-Philippe Champagne told Maclean’s. “Our ability to to help the citizens make their way back to Canada—and we will spare no efforts—is also subject to the conditions that are being imposed in the particular place where they are,” he says. Champagne has asked his Peruvian counterpart to contact the Cusco region’s governor on the Canadians’ behalf. “We had to arrange for basic necessities to be delivered to them,” Canada’s minister says.

Greg Bestavros got the email on Thursday morning that hundreds of Canadians trapped in a Peruvian mountain city were desperate to receive: Canada’s government is chartering a plane to Cusco to bring citizens back home.

Bestavros and his fiancée, Marina Fanous, couldn’t get tickets. They are not allowed to. The 29-year-olds are not even allowed to leave their hostel in Cusco’s city centre, to take a quiet walk through the greenery of Plaza San Francisco down the block. As the first Canadians flew out of the historic city on Friday, the Toronto couple will be spending day three of a mandatory 28-day quarantine in their tiny room.

A manager at Pariwana Hostel told Bestavros, Fanous and the other roughly 100 guests on March 24 that two people staying there had tested positive for coronavirus. Therefore, the Peruvian government was ordering everybody to stay inside the hostel for at least four weeks, Bestavros tells Maclean’s.

“They’ve told us that we could be here for one month if we cooperate, and up to three months if things don’t work out properly,” he says.

RELATED: Here are the accidental frontline workers keeping food on your table

The couple, and seven fellow Canadians staying at the hostel, had glimmers of hope earlier this week when Global Affairs Canada announced it had secured permission to land three flights in Lima, Peru’s capital, to ferry some of the thousands of Canadian travellers back home. But anxiety rose among guests when word got out that hostel-goers had fallen ill and were getting tested, and then hopes to leave evaporated with word the pandemic had, indeed, hit the Pariwana.

Cusco, a UNESCO World Heritage site and base for millions of annual visitors to climb up to the ancient Incan citadel Machu Picchu, is 90-minute flight away from Lima, or a 23-hour mountainous bus ride— butthe country had closed its airspace and clamped down on road travel last week in attempts to contain spread of coronavirus. After Ottawa secured Toronto-Lima flights earlier this week, Global Affairs alerted hundreds of Canadians registered in Cusco that the department had chartered a Colombian airline to bring some—not all—of them from Cusco to Lima, to connect with the Toronto-bound flight. Eight hundred Canadians flew home on the first two flights from Peru this week.

The government’s update email came with an advisory marked “IMPORTANT.” It states: “Peruvian authorities have placed certain hotels/hostels under official quarantine. If you are staying in one of these properties, do NOT purchase a ticket for this flight as we have been advised that no-one will be permitted to leave the premises.”

The first flight from Cusco to Lima is taking off now! 🛫#Peru #WheelsUp pic.twitter.com/K96w67F4TG

Bestavros and Fanous had already expected the positive test at their hostel would likely leave them stuck. Things had begun looking bleak for them a few days after their trip in Peru for a friend’s wedding began on March 12, before most of the western hemisphere had begun lockdowns and mass border closures—and few measures had been taken in Peru.

RELATED: Canadians have more faith in government to handle coronavirus than Americans and Brits—and less fear for their lives

They were still in Lima on March 15, when, heeding warnings from Canadian MPs for travellers to return home, they tried unsuccessfully to book flights home from there. The couple continued onward with plans to visit Cusco. Once there, they overheard at a restaurant that the borders and airports would close the next day. So the pair scrambled to book online any flights back to Lima or home, but everything was full.

Bestavros and Fanous spent a week avoiding the tourist-friendly city, getting fresh air only in their hostel’s courtyard and eating at the adjacent restaurant—practising the sort of social distancing they knew they’d have to abide by when they returned to Canada. While they awaited Canadian help, they watched friends and fellow guests from Mexico get repatriated to that country. “I would have expected that from our government maybe first,” said Bestavros. He felt Canada’s response lacked the same urgency.

When they learned fellow guests were getting coronavirus tests, Bestavros and Fanous began spending whole days mostly inside their room. Now that those tests came back positive, staying put is largely an order from hostel management. They can spend up to one hour in common areas relax—as long as no more than 20 guests are there at the same time. At meals in the dining room, each guest has an assigned plate and cutlery. They eat in shifts to avoid crowding. They’re instructed to wear face masks around others. The Toronto couple booked a room with a private bathroom, but none were available; they must make do with the shared facility, where they wash their undergarments and strive to avoid touching anything that could spread the virus.

“It’s a bit of an upscale prison—that’s what it feels like,” Fanous says. “And to imagine being here one to three months is…”

RELATED: Yes, this is a war. Do our leaders know what that means?

They’re anxious about getting sick, worrying: who touched that door? That utensil? Who will next show symptoms? Are they really stuck here until late April or longer? “This is a huge test for my mental health right now. It’s it’s really taking a toll on me,” Fanous says.

She works for a pharmaceutical company; he works in tech. They’re frustrated that the Canadian response has been slow to reach Cusco, even as ministers and government officials hail their efforts to start bringing back citizens and permanent residents from Peru after direct governmental negotiations. “As Canadians we expected to have a level of intervention that has not been present here, a level of communication that I think is just the bare minimum,” Bestavros says.

In response to questions about Canadians at this hostel, Global Affairs sent a statement that did not directly address guests’ ineligibility to access the government-chartered flights home, or future measures to assist them. “We are working to help as many Canadians as possible return home, but some may remain outside of the country for an indeterminate amount of time,” it said. T All Canadians who are allowed to get tickets for the flights from Cusco and Lima face health checks before boarding, and will not be allowed on if they have a fever and cough, or fever and breathing difficulties. he department has turned into a 24/7 consular support agency, arranging flights from several countries and helping with individual travel arrangements where possible.

A manager with Pariwana Hostels confirmed their Cusco location has two verified cases of coronavirus, and they are isolated from fellow guests. Nobody can leave or enter the hostel without authorization from government authorities, Maritza Conde told Maclean’s in an email.

Bestavros and Fanous are in a private room has two small beds. There is no place to hang clothes. There’s at least a wall plug, so they can keep phones charged for constant hours communicating with family and friends back home, and trying to get information about returning home. There’s a window for breeze, offering a view of the city and the mountains they’ve been unable to explore . Bars cover the window frame.

Says Bestavros: “I’ve entertained the idea of breaking them down and just getting out.”