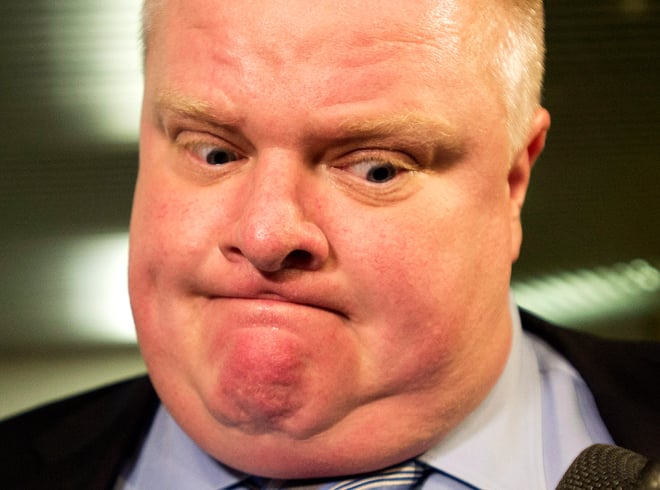 TORONTO – Toronto Mayor Rob Ford has been forced to apologize for various behaviours and off-colour or insulting remarks since the so-called crack video scandal broke in May.

Some of Ford’s apologies:

Apologizes and retracts comments he made about Toronto Star reporter Daniel Dale, who served him with a libel notice saying the mayor suggested in a televised interview that Dale was a pedophile.

Apologizes to Dale for the remarks made during the interview with Conrad Black, but the reporter said the mayor’s apology didn’t even come close to what he sought.

“I do not believe Mr. Dale is a pedophile nor did I intend to suggest that in my comments,” Ford said in a statement read during a council meeting. “I wish to sincerely apologize again to Mr. Dale if my actual words have caused him any harm or personal offence.”

Reluctantly apologized for suggesting members of council were “corrupt.” He initially said he withdrew his comments, but speaker Frances Nunziata said he needed to apologize.

Apologizes for running into Coun. Pam McConnell and knocking her over during a council meeting to strip the mayor of most of his powers.

“It was a complete accident,” Ford said. “I do sincerely apologize to you, Coun. McConnell.”

Apologizes for crude remarks he made earlier that day in which he denied offering a former female staffer oral sex, saying he had “more than enough to eat at home.”

“I want to apologize for my graphic remarks this morning,” Ford said.

Appears ashamed while delivering a statement in response to a video that surfaced of a rambling, enraged Ford in a profanity-laced tirade in which he threatens to kill someone.

“Obviously, I was extremely, extremely inebriated,” he said. “I’ve made mistakes. I don’t know what to say.”

Apologizes after admitting he had indeed smoked crack cocaine, likely in one of his drunken stupors.

“I know what I did was wrong and admitting it was the most difficult and embarrassing thing I have ever had to do,” he said. “To the residents of Toronto, I know I have let you down. And I can’t do anything else but apologize, and apologize.”

Apologizes on his now-cancelled weekly radio show on Newstalk1010 for making mistakes including appearing in public while “hammered” and texting while driving.

Apologizes to reporters for calling them a “bunch of maggots” during his radio show.

“I’m sure you understand this has been a very stressful week for myself and my family, but that doesn’t justify using the terminology I did in describing the media,” Ford said. “I sincerely apologize to each and every one of you.”