For the record: Brian Mulroney on Pierre Karl Péladeau and the PQ 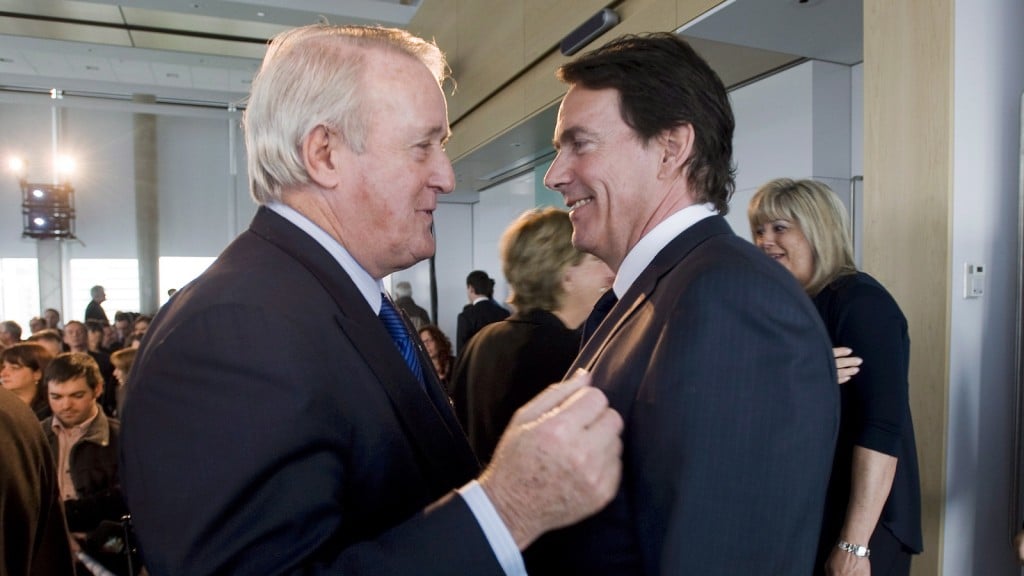 Brian Mulroney chuckled the other day when asked about former Quebecor CEO Pierre Karl Péladeau’s move to the Parti Québécois.

Mulroney, our 18th prime minister and current Quebecor board member, had just answered a few questions about the recently announced deal that saw (or would see, given that it still needs CRTC benediction) the sale of 175 of Quebecor’s Sun Media titles to Postmedia. (By the by, Mulroney’s laugh rattles the phone like a cheap speaker in your cousin’s Honda Civic.)

“I’m not going to get into that,” Mulroney said. “That was a long time ago, and I commented on it at the time. I’ll just leave you with a quote from Margaret Thatcher who, in such circumstances, would say, ‘It’s a funny old world.’ ”

It certainly is, at least as far as the Péladeau-Mulroney relationship goes. Just over a year ago, when Péladeau was but a billionaire scion of one of this province’s most cherished companies, I interviewed Mulroney for a profile of the man everyone calls PKP. At the time, PKP had just stepped down as Quebecor CEO and onto the board of Hydro-Québec. Mulroney guffawed at my suggestion that PKP might use the position as a stepping-stone into politics.

“I think he just wants to do other things. He wants to lecture at universities. He wants to run the board of Hydro-Québec. His own father wasn’t a great father, and he wants to be one. And all you need to do is look at the information circular to figure out that the guy doesn’t need any tag days. He’s got $700 or $800 million in Quebecor stock,” he said.

Mulroney has obvious affection for Péladeau, and their relationship is not without an apparent ideological blind spot when it comes to politics. For years, Péladeau hedged his bets on the sovereignist/federalist divide, though, privately, he was a strong separatist, according to many people I spoke with for the piece. Mulroney didn’t see this—or didn’t want to. There are shades of his relationship with Lucien Bouchard, whom Mulroney tried to bring into the federalist fold. The end result was Bouchard’s treachery, and Mulroney’s enduring bitterness.

The former prime minister didn’t sound in the least bit bitter about Péladeau, though the Thatcher bit is telling. The former British prime minister uttered that “funny old world” line at her last cabinet meeting in 1990, after barely winning a leadership ballot. She’d just confronted the treachery within her own cabinet, and was resigned to its effects. She stepped down shortly after.

I might say that Mulroney is resigned to Péladeau’s treachery for another reason. Even if his friends switch sides, he has a business to run.