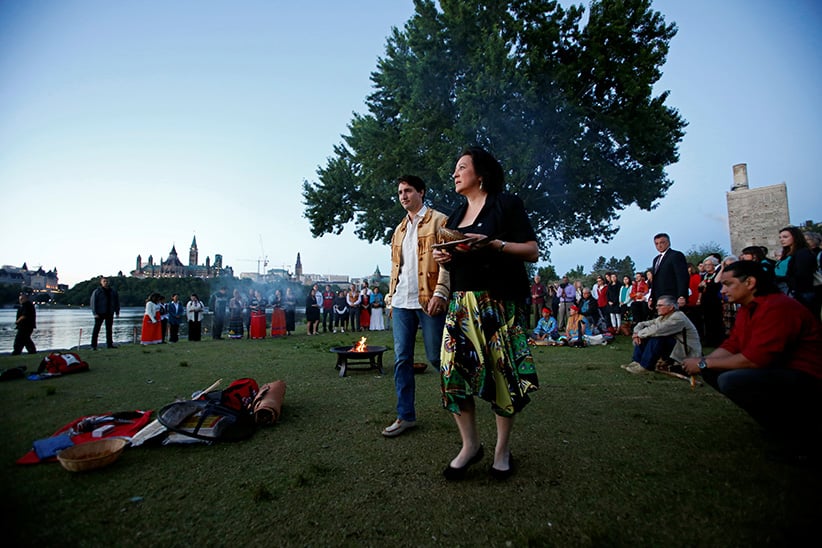 Message from the Governor General of Canada:

As we mark the 20th anniversary of National Aboriginal Day, I believe that we still have much to learn about the first peoples of this vast land.

This past May, my wife, Sharon, and I met with many residents of Aboriginal communities in the Hudson Bay region. It was with great interest that we listened to their stories of life and learning in that extraordinary part of the country.

Today, we are in Brantford, Ontario, to visit the Woodland Cultural Centre, formerly a residential school, to better measure the impact that such institutions have had on Aboriginal peoples. As honorary witnesses for the Truth and Reconciliation Commission of Canada, Sharon and I recognize the importance of maintaining a reconciliation process that will lead to improved relations between Aboriginal and non-Aboriginal Canadians.

This day is an opportunity to celebrate the incredible cultural diversity, ancestral heritage and significant achievements of Aboriginal peoples.

Today, on National Aboriginal Day, let us take the time to celebrate and honour the unique heritage and outstanding achievements of the Indigenous peoples in Canada.

National Aboriginal Day is first and foremost an occasion to celebrate the fundamental role First Nations, Métis, and Inuit have played – and continue to play – in shaping the identity of all Canadians. Coast to coast to coast, their remarkable art and cultures, significant contributions and history, are essential to our sense of nationhood.

Events over the past few months – including the loss of life to suicide and the feelings of despair felt in some communities – remind us that we must work in genuine partnership with Indigenous peoples, the provinces, and the territories to better support the well-being of children and families, improve the quality of education for Indigenous students, and ensure health services meet the needs of Indigenous communities.

We understand the importance of reconciliation and the process of truth-telling and healing in this renewal. With this is mind, we will continue the vital work of reconciliation as outlined in the Truth and Reconciliation Commission Calls to Action, in partnership with First Nations, the Métis Nation, the Inuit, the provinces, and the territories. This work will build on our commitment last month to fully adopt and implement the United Nations Declaration on the Rights of Indigenous Peoples.

Together, we will think seven generations out – as the Iroquois have taught – as we listen to Indigenous voices on environmental matters, build necessary roads, bridges, and water and wastewater infrastructure, and ensure a better and brighter future for Indigenous peoples in Canada.

I invite you to join the #IndigenousReads campaign to help raise awareness and understanding through shared culture and stories and encourage steps toward reconciliation with Indigenous peoples.

“National Aboriginal Day was created 20 years ago as a celebration of the contributions that First Nations, Inuit, and Métis people have made to Canadian culture and society. At the Department of National Defence and the Canadian Armed Forces, we take pride in our diversity. We continue to work towards our goal of a diverse modern military that is strengthened by the unique perspectives of our Aboriginal members,” said Minister Sajjan.

“We remember as many as 12,000 courageous Indigenous people who served Canada in the great conflicts and peace support missions of the 20th century. More than 500 made the ultimate sacrifice. We also express our gratitude for the service and sacrifices of the many Indigenous men and women who continue to serve in our Canadian Armed Forces today,” said Minister Hehr.

“The Government of Canada is committed to working in full partnership with Aboriginal communities. In that true spirit of cooperation and respect, I invite all Canadians, whether military or civilian, Aboriginal or not, to seek out opportunities to enjoy this important day in their community, together,” said Minister Sajjan.

It's #NADCanada I encourage everyone to join me in celebrating Canada’s First Nation, Metis and Inuit peoples today.https://t.co/5wvUPUgLS2

National Aboriginal Day is an opportunity to celebrate the rich history, accomplishments and diversity of Indigenous peoples in Canada. The indigenous communities across this vast land are a vital part of Canada’s past, present and future – and we wish them continued success.

The twentieth National Aboriginal Day falls on a landmark year for Indigenous Peoples. The Issue of reconciliation between Canada and Indigenous peoples has become one of the defining moral issues of our time. As part of this path forward we recognize the critical importance of First Nations, Metis, and Inuit People to Canada.

The 94 calls to action coming out of the closing of the Truth and Reconciliation Commission set forward a path of Reconciliation for our country centered on the full adoption and implementation of the United Nations Declaration of the Rights of Indigenous Peoples.

And in a historic ruling the Canadian Human Rights Tribunal found the Canadian Government to be racially discriminating against Indigenous children. The ruling is a stark reminder of how much urgent work we have ahead of ourselves to walk this path of reconciliation and justice together.

It is well past the time for us as a country to take more than just one more attempt at a first step forward. As a country we must meet the call of Indigenous youth who are demanding a better future with meaningful action now.

As New Democrats we will continue to work towards a strong nation to nation relationship that is based on respect and meaningful consultation because Indigenous peoples are the backbone behind much of what makes Canada great.

Elizabeth May, the Green Party of Canada:

Today, on the 20th anniversary of National Aboriginal Day, all Canadians have an opportunity to celebrate the rich and diverse cultures of the Indigenous peoples of Canada.

The legacy of residential schools and the inter-generational pain it caused will not be healed overnight. We must be committed to truly staying the course, respecting First Nations on a nation-to-nation basis, and acknowledging the constitutional rights of Inuit and Métis peoples.”

As government, Indigenous peoples and stakeholders work collaboratively on rebuilding vital relationships, let us enjoy today as a celebration of the First Nations, Métis and Inuit who help shape our multicultural society.