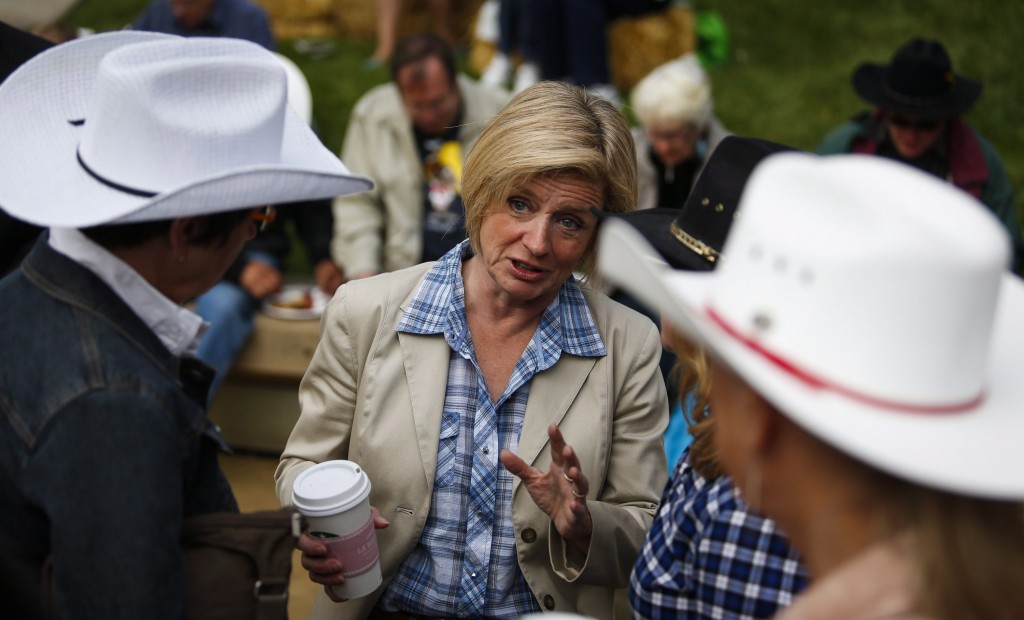 I was about to head inside the Calgary Petroleum Club for an interview Tuesday when a man dressed up as a cowboy accosted me on the sidewalk, stunned look on his face. This is common during Stampede, even in the afternoon.

It happened to be an oil industry lobbyist, who had just left an investor’s forum where Premier Rachel Notley had delivered her first major (private) speech to an industry crowd, two months after her New Democrats won.

This plaid-shirted fellow told me he didn’t expect that kind of speech to the Stampede Investor Forum. Didn’t expect the NDP premier to sound that pro-industry, replete with words of the oil sands’ “tremendous asset,” “job creators” and a province “wide open to investment.” Don Braid, columnist for the Calgary Herald, said the energy sector figures didn’t just get an olive branch from Notley: “She brought the whole tree and shook it, raining down petals of praise and friendship.”

Eight of Notley’s 11 ministers’ attended the luncheon speech, on break from a cabinet meeting. Environment Minister Shannon Phillips wasn’t scheduled to join, but did. The premier’s speech hinted at climate change reforms to come, but in lullaby reassuring tones.

This was rhetoric tailored to a certain audience, 25 international investors plus about 120 industry representatives; Notley may make different noises yet in front of a different crowd, and there are a few megatonnes of questions remaining around the coming energy royalty review. But you know what they say about introductory handshakes. Here is the premier’s prepared text at the forum cosponsored by her government, Calgary Economic Development and the Canadian Association of Petroleum Producers, the industry’s main megaphone:

It’s a pleasure to be here with my Cabinet colleagues, to join you for the forum.

And I’d like to extend my gratitude to all the staff from Calgary Economic Development, CAPP and the Government of Alberta who have spent so much time and effort organizing it. I appreciate your hard work.

To our international guests and industry representatives, I’m glad to chat with you.

I hope our guests are finding the Stampede Investment Forum enlightening, particularly yesterday’s tour of the oil sands.

Thank you to the companies who enabled delegates to see their operations first-hand.

An incredible amount of made-in-Alberta know-how keeps them up and running — and constantly improving.

And if there’s one lesson visitors will learn during their stay, it’s that innovation is at the heart of Alberta industry and always has been.

This is true of each sector, including forestry, agriculture and manufacturing.

But it’s the oil sands that have really emerged as our international showpiece.

For more than half a century, Albertans have been coming up with unconventional solutions for an unconventional resource so we can extract, handle and ship it responsibly, to the very best of our abilities.

This attitude of pushing the limits of what’s possible influences every aspect of the oil sands, from research and development to environmental management to the service and support fields.

It’s a tremendous asset which has transformed Alberta into one of the world’s leading oil producers.

And I’m here today to emphasize that the province has a government determined to defend this advantage, by being constructive at home, and by building relationships around the world.

I understand that people are uncertain after the last election.

Whether you’re an Albertan or a long-time Alberta watcher, change at the top after so long can seem difficult.

But we are working hard to make the transition as smooth as possible, and bring as much economic stability as we can, while we implement our plans.

Those plans centre on living up to our promise to grow prosperity and create good jobs and conditions that benefit every Albertan.

We know there is only one way to succeed.

And that’s by supporting a free, open, sustainable and increasingly diversified economy.

However, we can’t accomplish this on our own.

Job creators create jobs in the private sector, not government.

And we will be honest, thoughtful partners to them.

We will maintain a warm welcome for investors and uphold their right to earn fair returns.

So Alberta will continue to be a healthy place for private investment under our government.

This definitely applies to energy.

Expanding existing oil sands projects, establishing new ones and pioneering advanced technologies — all this requires spending on a large scale.
Under our leadership, Alberta’s abundant oil and gas reserves will remain wide open to investment.

We will maintain one of the most competitive tax systems in Canada.

Our government will boost exports by seeking out new relationships, strengthening old ones and enhancing Alberta’s environmental record.

And we will be consultative and prudent in how we take the province in a different direction.

When it comes to potential shifts, such as greenhouse gas emissions and royalties, no one will be surprised by how our decisions unfold.

Change will come after consultations led by some of Alberta’s best minds, with all those who stand to be affected.

They will have every opportunity to share their perspectives.

There is so much riding on those decisions: the jobs that families depend on, the natural beauty surrounding us, and the inheritance we leave to our kids… that government must get them right.

A confident industry, secure in the value of its investments, is vital to this process.

After all, the energy sector needs stability to keep Albertans employed and to innovate as it confronts climate change.

And I will not forget it.

Ladies and gentlemen, I regret that I can’t stay for the rest of lunch.

But I look forward to continuing this conversation with our visitors from abroad during the roundtable.

And to our guests, if you haven’t been to the Calgary Stampede yet, I urge you to check it out.

The Stampede is one of our signature events. It’s a great way to understand our province.

Behind the suits, or the hard hats and steel-toed boots you encountered up north, is a raw, colourful culture with a powerful connection to the land and the peoples that shaped it.

A little bit is on display here, among those proudly dressed in western wear.

But it’s richer and deeper than what you see.

That’s Alberta for you. There is always more than you suspect beneath the surface.

And I hope the Forum inspires you to discover this truth for yourselves.

FILED UNDER: Alberta Editor's Picks FOR THE RECORD rachel notley