For these east-coast fish, human intervention is their only hope

A $4,000-per-fish rescue project is the only thing between the Inner Bay of Fundy salmon and oblivion 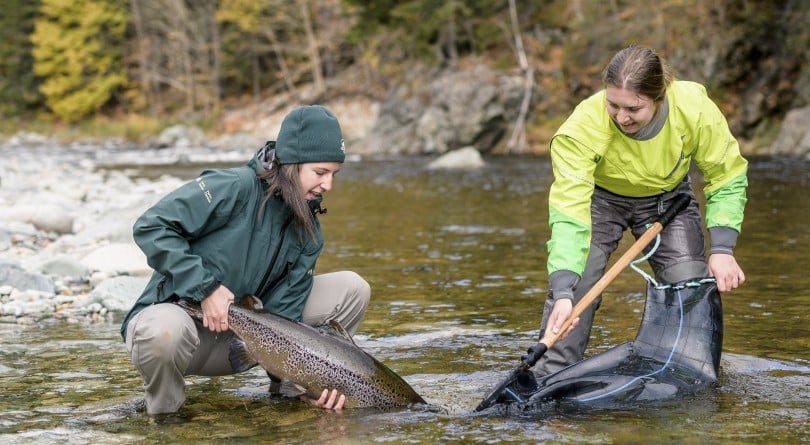 Rescuers nab young salmon before they reach the ocean, then raise them in a sea pen; they later truck them back to their native river for release (Nigel Fearon/Parks Canada/Fundy National Park )

He’s the most expensive, well-travelled salmon no one will ever eat. No. 270810 is 15 lb. and two and a half feet of kinetic energy, with gills gaping and a prognathic lower jaw that signals his readiness to spawn.

Kurt Samways, an aquatic ecologist from the University of New Brunswick, dips him into the Upper Salmon River in New Brunswick’s Fundy National Park. And suddenly, 10,000 years of evolutionary conditioning kicks in and the ﬁsh swishes upstream like a stroke of watercolour. “Those ﬁsh want to be in that river swimming, and to see that they have some energy and some ﬁght in them is great,” says Samways, as the cheers of about two dozen biologists, high school students, federal ofﬁcials and ﬁsh farm reps erupt on the river bank.

Two years earlier, when No. 270810 was a smolt, Samways and a team of biologists and Parks Canada staff intercepted him on his way to the ocean, where he most likely would have been killed by a bigger ﬁsh or succumbed to a dwindling food supply due to rising ocean temperatures. Instead, he was raised in the world’s ﬁrst sea pen for wild salmon 230 km away on Grand Manan Island. Now, his long journey—by 18-wheeler, ferry, pickup truck and black rubbery hammock carried by Samways to the river bank—has at last come to an end.

It’s year four of Parks Canada’s ﬁve-year, $2.6-million plan to restore the critically endangered Inner Bay of Fundy Atlantic salmon by collecting young salmon from the river before they go into the ocean, where they have a 99 per cent mortality rate, then raising them off-site and releasing them back into the river to spawn (which both male and female salmon do). In mid-October, 650 of the genetically distinct ﬁsh were either hand-released or tipped out of a giant cooler that was helicoptered in.

For 10,000 years, more than 40 rivers that feed into the Bay of Fundy teemed with Fundy Atlantic salmon, but the population began to collapse in the 1980s and ’90s. Today, only an estimated 200 are left, and the ﬁsh was listed in 2003 as endangered under Canada’s Species at Risk Act. It faces critical risk of extinction.

This recovery program, involving seven different agencies—including the university, the federal government, Indigenous groups and the aquaculture industry—is the only one of its type in the world.

Only 70 of the 900 salmon released last year were found to have made it back this year, a number Samways acknowledges seems tiny compared to the swarms that once crowded the river. Still, he says, “it’s a 29-year high,” adding that in 2016, only 13 returned. Last year, the number was 32.

And the program beneﬁts the river in less visible ways, he says, comparing it to adding “a natural fertilizer” to the waterway. “You get more algae on the rocks, which feeds the invertebrates. When there are more invertebrates, there’s more food for the juvenile salmon.”

What makes the Fundy Atlantic salmon distinct is their limited range; they don’t leave the famed body of water between Nova Scotia and New Brunswick that’s home to the highest tides in the world. (Other Atlantic salmon migrate as far north as Greenland.)

But the Bay of Fundy is also home to 100 aquaculture sites, an industry that Fisheries identiﬁes as a leading threat to the recovery of local species. (Fishing and climate change, among other causes, are also cited.) In September, a federal Fisheries review found non-native salmon—including St. John River salmon, a popular strain used in aquaculture, and European ones that are not legal to farm in the region—in the Inner Bay of Fundy, noting that their genes had mixed into those of the local salmon population. Without the program, it said, the species would likely be wiped out.

Such ﬁndings lead conservationists to view the project as, at best, a long shot. Neville Crabbe of the Atlantic Salmon Federation, an NGO dedicated to the conservation of wild Atlantic salmon, points to the presence of open-net pen operations near 32 Inner Bay of Fundy rivers, saying domesticated salmon escape farms all the time. Provincial and federal regulations, he laments, only require companies to self-report if more than 100 ﬁsh escape. “That has the effect of wiping away 10,000 years of river-speciﬁc adaptation in a single generation,” he says. “Hybrid offspring of wild and farmed ﬁsh are not able to tough it out in nature like wild ﬁsh can.”

A Fisheries spokesperson says the juvenile ﬁsh collected for the program are genotyped to make sure their ancestry is from the Inner Bay population. “Certain rivers are monitored for wild stock returns,” says Keegan Eatmon. “If a ﬁsh entering one of these rivers is captured and determined to be of aquaculture origin, it is removed and provincial authorities are notiﬁed.”

Meanwhile, salmon No. 270810 still swims in the Upper Salmon River. The hope is he will fertilize a nest of pea-sized eggs buried under the river gravel somewhere along the way. “If we didn’t do anything, there would be no ﬁsh in these rivers,” says Samways. “Some people might say, ‘So what? Why are we spending all this money to do this?’ I think there’s an inherent conservationist reason: we don’t really want to lose the species—they play an important role in our ecosystem. But there’s also a really strong cultural connection to Atlantic salmon.”

Clarification: The original version of this story described the salmon restoration plan as Fisheries and Oceans Canada’s project; while Fisheries is a partner in the recovery initiative, the plan is funded by Parks Canada. Also, the original version quoted a Fisheries and Oceans report as saying Bay of Fundy aquaculture operations were a leading factor in the decline of the species; the report described aquaculture as a leading threat to the recovery of the species.

Update: The original version of this story contained incorrect figures provided by Parks Canada as to the cost of the program; this post has been updated with the correct information.