For Tory and Liberal MPs, the puck stops here

When MPs faced-off in Ottawa for a 'spirited' game of hockey, things got a bit chippy—and the Tories crushed the Liberals 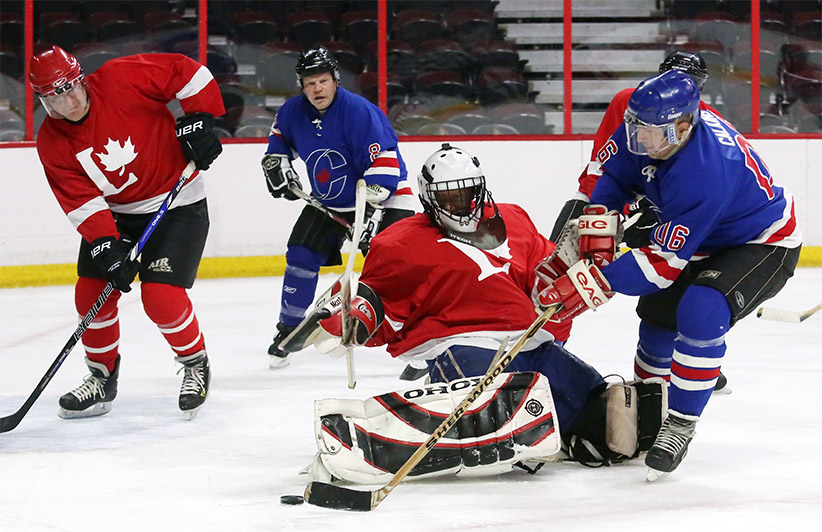 Conservative MP Blaine Calkins tries to get the puck around Liberal goalie Marc Miller during a charity hockey match in support of the Terry Fox Foundation at the Canadian Tire Centre in Ottawa. (Andrew Meade)

If, for some reason, you ever wanted to hear a politician speak in an even more cheerfully benign and stage-managed way than their species is generally given to, try asking them pointed questions about a partisan hockey game.

Last month, Liberal MPs battled their Conservative colleagues on the ice at the Canadian Tire Centre in deepest suburban Kanata, Ont. Of the relative talent levels on the ice, Kyle Peterson, captain of the Liberal team, said only, “We had a good mix of veterans and rookies. Some people had more skill than others, but everybody certainly tried their best.”

Gordon Brown, captain of the Conservative team, was asked whether ice time offers catharsis to work out some of the antipathy that builds up during question period. “Let’s just say it got very spirited and very competitive late in the game,” he said. “We’ll leave it at that.”

The game, on the Ottawa Senators’ home ice, was played in front of a few hundred fans (as in: Hill staffers) and raised nearly $6,000 for the Terry Fox Foundation. Following a hiatus of several years, this was the revival of a semi-regular tradition that dates back to the late 1990s, with various partisan team configurations over the years. Aside from glory, they play for the Hec Clouthier Memorial Trophy; everyone calls it that for some reason, though the fedora-wearing former Liberal MP who originally founded the competition is very much alive and well.

Ultimately, the government was humbled by the official opposition, 9-3. The result may simply reflect the raw talent on the respective benches in the House of Commons, or perhaps shrewder drafting by the Tories, who brought in former MPs Brian Storseth and James Rajotte, and actively tried to procure more ringers. “We were really hoping we were going to get Patrick Brown, the leader of the Ontario PCs, but he was on a Northern Ontario tour,” says Brown. “He’s a really good hockey player.”

Rodger Cuzner, Liberal MP for Cape Breton, 61, coached his caucus colleagues, and summed up the job thusly: “You just keep an eye on their vital signs, know where the defibrillator is located in the arena, throw them out and hope for the best.”

The game got chippy near the end, but to Cuzner’s eye, that was less about anyone trying to grind it out in the corners than it was lack of skill. “There were guys that sort of mistook a player’s inability to stop for his want to hit them,” he said.

Which is not to say that nobody dabbled in the dark arts. An unofficial, strictly not-for-attribution straw poll of select players on both teams suggests that Alex Nuttall, the Conservative MP for Barrie, Ont., was the goon of the game. Nuttall says he’ll wear that title as “a badge of honour,” and points out that while he served two penalties, he also drew four penalty shots, so perhaps he’s just a big target (literally: he’s six foot five and 270 lb.). “Being from the town where Don Cherry grew up and played hockey, we know what hard-hitting hockey looks like,” he chuckles. Liberal MP Adam Vaughan and Blake Richards, the Conservative representing Banff, meanwhile, earned nods as the most skilled players on each team.

But the biggest star to emerge from this game is an off-ice one: should there ever be a dearth of analysts available for Hockey Night in Canada broadcasts, Cuzner would make one heck of a colour guy. Assessing how the netminding has improved, he said, “We had Denis Coderre one year for the Liberal team, and poor Denis couldn’t save his allowance.” Cuzner described another player, whose physical attributes outstripped his inclination toward gentlemanly behaviour, as “big enough to burn diesel.”

The Speaker of the House, Geoff Regan, in the non-partisan fashion demanded of his role, played part of the game with each team. He initially planned to split his time equally, but when he realized the Tories had more players and the score was lopsided, he switched to the Liberal side to shore things up. Alas, it was for naught. “I was joking to the Liberals that they’ve got to recruit better,” Regan said.

The week after the game, Brown rose in the House, wearing a Conservative hockey sweater and surrounded by a small knot of grinning MPs sporting team gear. He recapped the “spirited affair that determined Canadian parliamentary hockey supremacy,” with the trophy perched on a desk in front of him. “The Conservatives scored first and put the overtaxed Liberals in a small deficit,” Brown began, cackling. It went on like this for a good long while: colour commentary by way of goofy political puns about deficits spiralling out of control, pucks flying first-past-the-goalpost and so on. The victorious caucus members hooted and thumped their desks.

“It was good fun,” Regan confirmed from the Speaker’s chair when Brown finished. Then it was time to return to business. “Jackets back on now, folks.” 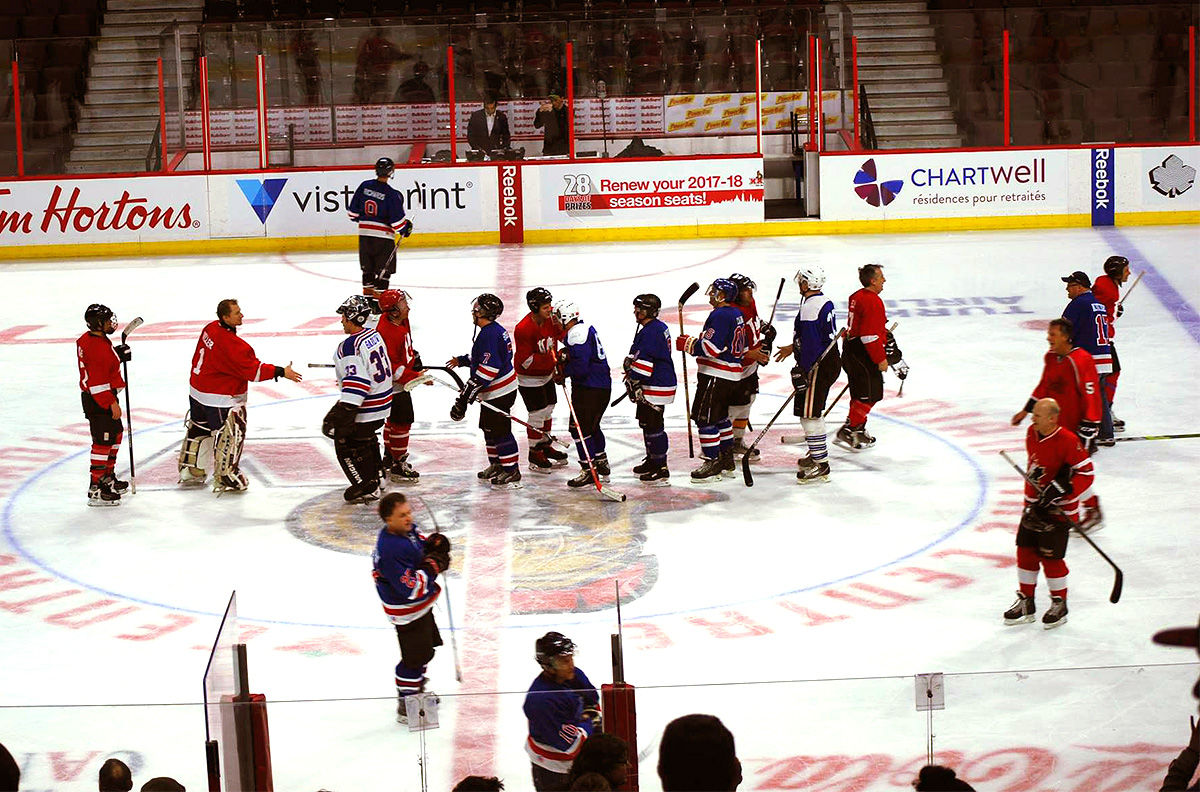 Liberal and Conservative party MPs, senators and staff shake hands after their game in support of the Terry Fox Foundation at the Canadian Tire Centre.