Bill Bennett, who had been suffering from Alzheimer's, was an architect of financial restraint in B.C. and a signatory to Canada's constitution 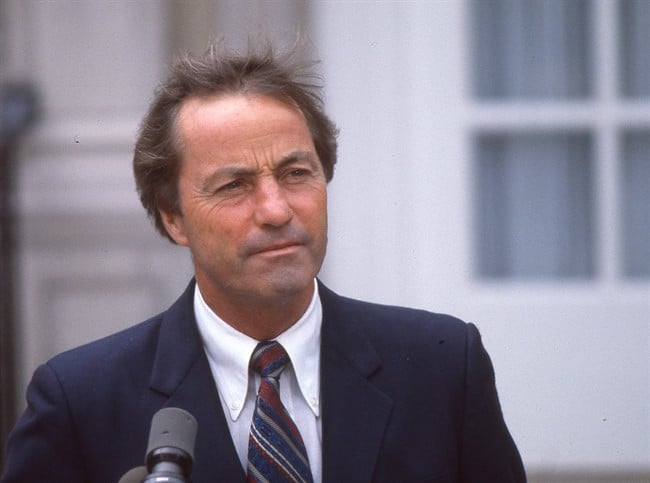 Former British Columbia premier Bill Bennett, shown in this undated file photo, known as an architect of financial restraint in the province, has died in his hometown of Kelowna at the age of 83. THE CANADIAN PRESS

KELOWNA, B.C. – Former British Columbia premier Bill Bennett, an architect of financial restraint in the province and a signatory to Canada’s constitution, has died in his hometown of Kelowna at the age of 83.

Bennett had been suffering from Alzheimer’s disease for several years and died Thursday.

His family said in an obituary that Bennett cherished his time with them and had a quick wit and great sense of humour.

“Bill was competitive in all aspects of his life, whether in business, politics or the game he loved most — tennis.”

He took over the party from his father W.A.C. Bennett, who stepped down in 1972 after his 20 years in power ended in electoral defeat.

Under Bennett’s helm, the Socreds took 34 of 55 seats in the legislature and more than 49 per cent of the popular vote.

During the 1981 constitutional negotiations, Bennett was one of the so-called Gang of Eight premiers who opposed many elements of then prime minister Pierre Trudeau’s plan to patriate the constitution unilaterally.

The Gang of Eight eventually fell apart with only Quebec opting out of the constitutional compromise that led to patriation in 1982.

Prime Minister Justin Trudeau issued a statement, offering his condolences to Bennett’s family and friends, calling the former premier a savvy politician and businessman who did a great deal to build B.C. and its reputation.

“He was a very capable and hard working British Columbian who contributed enormously to his province and to our country,” said Trudeau. “He will be remembered and honoured.”

Premier Christy Clark issued a statement Friday saying Bennett will be remembered as one of B.C.’s most influential leaders.

“Perhaps no other premier did more to modernize our province. He brought SkyTrain, Canada Place, and B.C. Place to Vancouver and began the Coquihalla Highway project and expanded our mining and hydro industries.”

“He made me the minister in charge of Expo ’86 and for four years we went through some very interesting times getting Expo ready. It was a lot of work but it was a lot of fun. And Mr. Bennett and I became really good friends and very close.”

Former Socred cabinet minister Brian Smith said Bennett was his tennis partner and confidant in the mid-1970s before the premier persuaded him to run for politics in 1979. He lauded Bennett for speeding along projects even when provincial revenues had tanked because of a weak resources sector.

Smith credited Bennett for transforming Vancouver into a world-class city.

“He was somewhat shy and he was not flamboyant, but he was hugely dedicated,” Smith said, choking up.

Vancouver billionaire Jim Pattison said Bennett treated taxpayers’ money as if it were his own.

“I can tell you right now I have never met anybody who cared and delivered on looking after people’s money,” said Pattison, who was recruited by Bennett in 1981 to run Expo ’86.

Sihota said Bennett was always underestimated by the NDP, but he was the leader who consistently defeated the New Democrats.

Former deputy premier Grace McCarthy said it was a privilege to work with Bennett, and she recalled they worked hard to turn around difficult economic times and create jobs.

“My memories of him are really that of being an exceptionally good team player,” she said. “He was able to bring a team together and keep people working together without any problems.”

Bennett stayed out of active politics while his father was premier, explaining that “there was a family agreement that there wasn’t room for two or three of us in politics at the same time.” But he was involved behind the scenes in some of his father’s campaigns.< In a 1972 byelection following his father's retirement from politics, Bennett captured the seat with 39 per cent of the vote. A month after the byelection, he declared for the Social Credit leadership and won it handily when his most dangerous potential opponent — Phil Gaglardi, a former highways and welfare minister — decided not to run. After toppling the Barrett administration, the new premier vowed to "get B.C.'s economy moving again" with measures such as a 40 per cent increase in provincial sales tax, 140 per cent increase in premiums under the government's Autoplan insurance program and 100 per cent increase in B.C. ferry fares. In the early 1980s, Bennett gained a reputation as being hard-nosed after cutting thousands of jobs from B.C.'s public service despite massive protests from labour. He resigned in 1986 and returned to private business. Bennett married Audrey James in 1955. She was a nurse's aide at Kelowna General Hospital. The couple had four sons —Brad, Kevin, Stephen and Greg. He is survived by his wife of 60 years, his brother Russell, four sons, eight grandchildren and one great-grandchild. The obituary said a celebration of his life would be held in Kelowna in the new year.