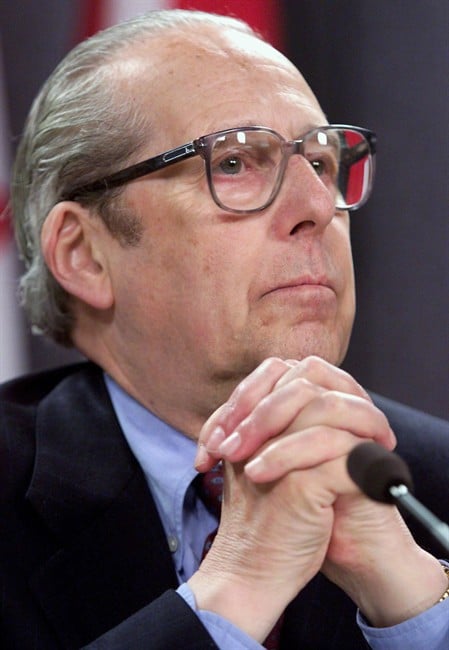 Victor Goldbloom, commissioner of official languages, is shown talking with reporters at a news conference in Ottawa Tuesday May 4, 1999 after tabling his department’s annual report. Goldbloom died Monday, Feb. 15, 2016 at the age of 92. (Tom Hanson/CP)

MONTREAL – Victor Goldbloom, a former Quebec provincial cabinet minister who went on to become Canada’s official languages commissioner, has died at the age of 92.

His family said he died of a heart attack on Monday night.

A pediatrician by training, Goldbloom was first elected in 1966 for the Quebec Liberal party in the Montreal riding of D’Arcy-McGee.

After being re-elected in 1970 and 1973, Goldbloom was eventually named Quebec’s first environment minister by then-premier Robert Bourassa.

Goldbloom was re-elected again in 1976 before stepping down in October 1979.

He is credited with ensuring the 1976 Olympic Games in Montreal started on time after he was given responsibility for overseeing the Olympic Installations Board.

Goldbloom served as official languages commissioner between 1991 and 1999.

“He is someone who had a distinguished public career,” Kelley said. “He was a commissioner of official languages. He was someone all throughout his career who tried to find ways to build bridges between people, build bridges between communities. I think he made a great contribution to Quebec and Canadian society.”

“Victor, beyond being a gift to the Jewish community that I’m proud to be part of, was a gift to Quebec, to Canada and in some ways to the entire world in his work on inter-religious dialogue,” Birnbaum said.

“Victor, who in some ways saved the Montreal Olympics, in so many ways to me represents the love and connection of English-speaking Quebecers to this province.”

In a statement, David J. Cape, national chair of the Centre for Israel and Jewish Affairs, praised Goldbloom’s feats in various spheres.

“The Jewish community of Canada has lost a beacon and one of the most outstanding leaders of our time,” he said.