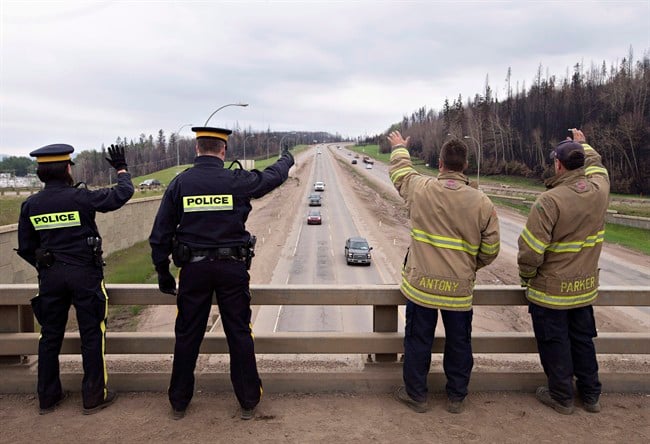 Firefighters and police welcome people into Fort McMurray Alta, on Wednesday June 1, 2016. Premier Rachel Notley and her government paid tribute Monday to those who came to Alberta’s aid and rescue during the spring’s devastating Fort McMurray wildfire. (Jason Franson/CP)

EDMONTON – Premier Rachel Notley and her government paid tribute Monday to those who came to Alberta’s aid during the spring’s devastating Fort McMurray wildfire.

Notley said their actions reflected the resilience of all 88,000 people who were forced to flee the fires in May.

“While the disaster changed the lives of tens of thousands of people, it did not destroy their strength, their resilience or courage,” Notley said at a ceremony at the legislature.

MORE: Our long-read on the Fort McMurray fire, from first smoke to return

Opposition Wildrose Leader Brian Jean, whose constituency includes Fort McMurray, choked up as he thanked those who stepped up to help.

“These are the people that lined the highways — provided gas, water, food — and drove towards the flames to help our fellow Albertans,” he said.

The blaze destroyed more than 2,400 homes and buildings, and torched more than 5,000 square kilometres.

One of the award recipients, Wood Buffalo fire Chief Darby Allen, said people are still grappling with the memories and reminders of the devastation.

“We’re having a tough time up there,” said Allen. “People are struggling mentally with the fire, what happened to them.

“It’s hard to put your finger on it. It’s just different. People ask me all the time, ‘What’s it like now?’ It just feels different.”

Fallout from the fire continues to be felt across the province. It has added an estimated $500 million to this year’s budget deficit, which brings the revised red ink total to $10.9 billion.

The Alberta government also tabled legislation Monday that would raise maximum fines to $100,000 from $5,000 for anyone engaging in behaviour that could lead to wildfires.

The fine for corporations would be up to $1 million.

The size of a fine would depend on the nature of the violation and would be determined by the courts.

The proposal also includes a $10,000 maximum fine for industrial violations such as lack of firefighting equipment on a work site.

People burning fires during a fire ban without a permit or abandoning a campfire while it is still going would be fined between $150 and $1,000.