Fort McMurray homeowners to be compensated for hiked drywall duties 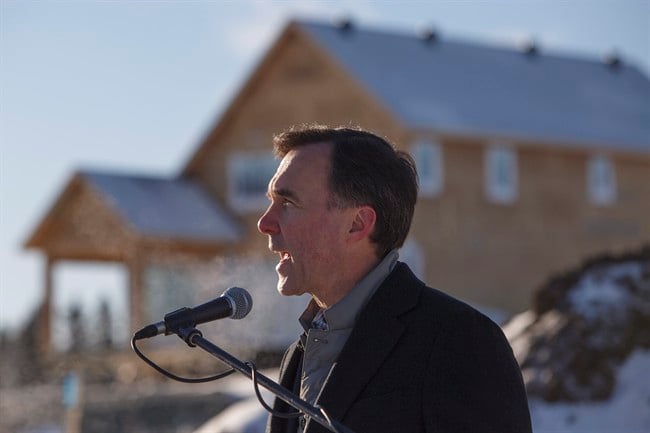 Finance Minister Bill Morneau announces changes to the drywall anti-dumping duties in response to scarcity and exceptional price increases for drywall in Fort McMurray, Alberta, on Monday February 27, 2017. Morneau announced the Federal Government will be lowering the duties and directing approximately $12 million generated by the tax to provide relief for Fort McMurray residents rebuilding after the wildfire as well as builders and contractors adversely affected by the higher drywall costs. (Amber Bracken/CP)

At the same time, some of the roughly $12 million collected since the duties were imposed in September will go toward a compensation package for residents of Fort McMurray forced to rebuild their homes after wildfires tore through the community, Morneau said after he visited a residential neighbourhood in the northern Alberta city.

“We’re pleased to be able to help people out,” said Morneau in an interview. “We know that they’re obviously facing real challenges still.”

The minister said the program will deliver about $300 to an average Fort McMurray family whose home replacement project was affected by higher drywall prices because of the tariffs. He said the money is expected to be available before year-end.

Some of the funds will also go to builders and contractors in Western Canada who had to absorb unexpected higher costs to complete fixed price jobs they had already been contracted to do, Morneau said.

The duties imposed last fall were in response to a dumping complaint by French-owned CertainTeed Gypsum Canada, the last drywall (or gypsum board) manufacturer in Western Canada with plants in Vancouver, Calgary and Winnipeg, and at two gypsum quarries in B.C. and Manitoba.

The Canadian International Trade Tribunal (CITT) ruled last month that, while U.S. firms had dumped drywall in Canada at discounted prices over the past few years, maintaining duties would not be in the country’s trade interests.

The tribunal recommended ending preliminary duties of up to 276 per cent imposed by the Canada Border Services Agency, and instead charging permanent variable duties on any imports that fall below a set floor price.

The government on Monday said it would lower minimum import prices by just over 32 per cent, an approach that is expected to result in the same level of duty reduction as recommended by the CITT.

“The approach we did, by creating a minimum imported price, quickly deals with the issue so that people can move on with the home-building decision in the case of home builders or with the buying decision and have a good sense of what the cost implications are,” said Morneau.

He said the CITT’s recommendation to suspend tariffs for six months was rejected in favour of more quickly establishing price certainty.

Ben White, CertainTeed’s regional manufacturing manager for Western Canada, said he’s pleased that the rebuilding of Fort McMurray is being supported and that builders faced with losing money on drywall contracts will be compensated.

But he said the company will have to study Monday’s ruling before deciding whether it will affect the 20 to 30 new jobs it has created since last fall to ramp up production at its western Canadian plants after the duties made imported rival products more expensive.

“That’s what it’s always been about for us is those manufacturing jobs, good jobs in Western Canada, and free and fair trade,” White said Monday.

He said CertainTeed employs a total of between 230 and 250 employees in Western Canada. It had warned previously that the dumping of U.S. products for as little as half of the price south of the border put all of those jobs in danger.

Phil Meagher, deputy mayor of the Regional Municipality of Wood Buffalo, which encompasses Fort McMurray, said the federal relief was a needed “correction” for the harm done by the tariffs.

The community lost 1,800 single-family homes and dozens of other structures in last spring’s wildfires.

DCL Drywall of Edmonton said its cost of a four-by-12-foot sheet of half-inch drywall rose by about $4 to $17.76 because of the tariffs.