When disaster hit, the people of Fort McMurray showed their better natures, not the instincts of 'survivalists' 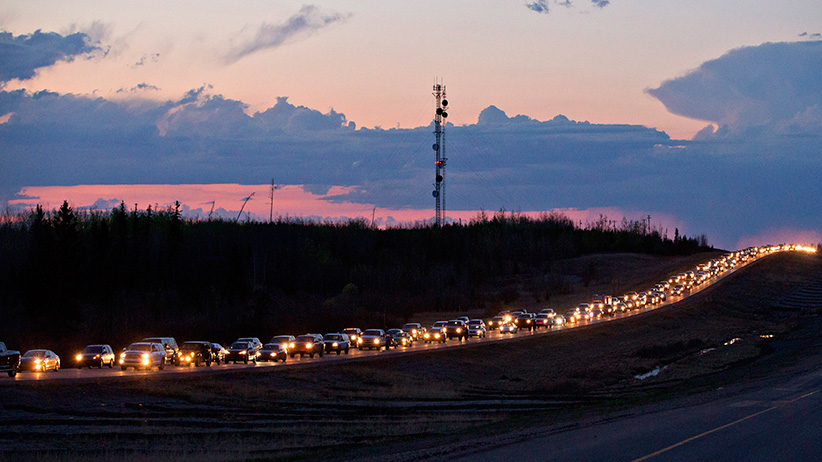 Traffic lines the highway as residents leave Fort McMurray, Alta., on Tuesday May 3, 2016. A wildfire has put all of Fort McMurray under a mandatory evacuation order which means that about 70,000 people who live in Fort McMurray are being told to flee the city. (Jason Franson/CP)

There exists a semi-popular school of thought, called survivalism, that in the event of disaster, one must look out for oneself. That, in order to be fully prepared for an inevitable catastrophic event, one ought to squirrel away supplies, learn to hunt game or to build a fire and shelter, and be prepared to go perhaps months without contact with other humans. In the post-9/11 era, those who adhere most to this theory and often practise parts of it already, have been dubbed “preppers”—those who are prepared.

We have, collectively, always been fascinated by the idea of disaster. In the 20th century, the Cold War and the technology developed in those years in pursuit of both space and nuclear strength, gave us new ways to imagine the end of the world.

The 21st century has failed to ease our angst, as serious threats of terrorism, drug-resistant bacteria and climate change—along with plenty of unserious threats of electromagnetic pulses, polarity reversal, planetary collisions or Mayan prophesy—have let us double-down on the idea that, before too long, we will be caught up in a mass disaster.

In fact, now we see disasters every day. The news is full of them. We are exposed to a seemingly endless cascade of awful events. Given this, it might be odd to think that when we go to the cinema or watch TV to relax, often we choose to see the same kind of thing. Zombie invasions. Contagion events. Terrorist cells.

These stories are entertainment, sure, but also catharsis—a way to help us cope with the reality of the world in which these sorts of things happen so regularly. We do that via the hero or heroine, who, coincidentally, more often than not survives by flaunting social rules and laws, and simply doing whatever is in their individual best interest to survive. This is true of Titanic as it is true of 2012. And maybe, we start to think, the preppers have it right after all.

But if we’re truly paying close attention to those images in our news feeds, we might come to a different conclusion.

It is likely safe to say that we have all by now seen at least one photo from Fort McMurray this week. The inferno that engulfed the city forced nearly 90,000 residents to flee, en masse, to safer ground. Like other disasters, the images filled our news programs, our newspapers and our news feeds. In each image, the power of the fire is palpable. Trees alight at the roadside. Embers dashing across windshields. Smoke thick enough to shroud the world entirely mere feet ahead. Neighbourhoods wiped clean, leaving behind grey, ghostly outlines of what were once cherished homes.

But then there is this one picture. And it is a bit different than the others. In it, we see two lines of cars, one following closely behind the other, moving slowly on a highway at dusk. The skies are mostly clear. The sun is setting in the distance, behind a small hill. It is still, like all the others, a picture of the disaster unfolding in Fort McMurray, except there is no fire—at least not one we can see.

There is something else, too, that makes this photo stand out, beyond it lacking the key element to the overall story: that small patch of asphalt in the foreground. It is not striking that it should exist, because of course there is another side to that highway. However, it is surprising that it appears empty—not because we think there ought to be vehicles heading into town, but because, at the moment this picture was taken, nobody leaving Fort McMurray is apparently flaunting the rules to use it as an extra escape route.

Rather than strike out on one’s own, it seems a good way to survive disaster is to instead drive slowly, even cautiously, in the same direction as everyone else, surrounded by your friends and neighbours. It is to follow the rules, even with time ticking down the moments left for escape, and even when those rules don’t seem to matter anymore. It is to survive as humans have done everything else: together.