Fort McMurray says thanks to Canadians

'We are thankful for the support of Canadians' 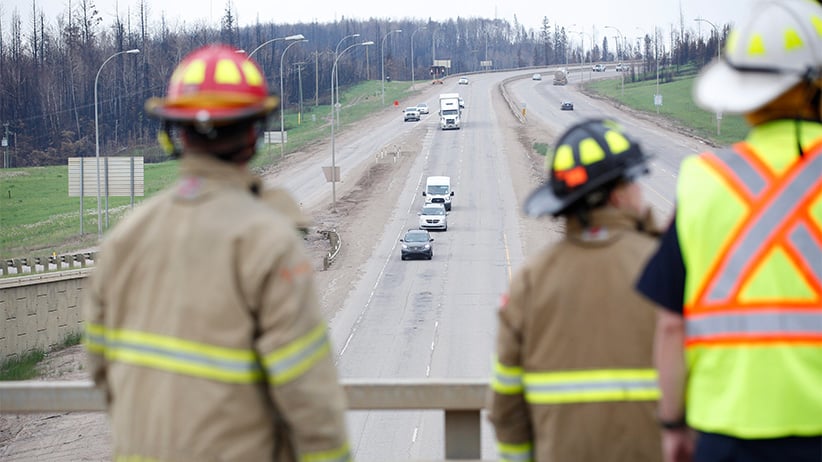 Cars make their way down Highway 83 as they re-enter Fort McMurray, AB. (Photograph by Chris Bolin)

FORT MCMURRAY, Alta. — As Canadians count the reasons they have to be grateful this Thanksgiving, Fort McMurray, Alta. is expressing its own thanks to Canada with a special video.

The Regional Municipality of Wood Buffalo has posted a video on its Facebook page expressing the gratitude residents have for the help and support they received in the spring when a massive wildfire forced everyone to flee the city for weeks.

The video begins with scenes of smoke and flames, along with accounts from residents about what they went through as they left.

It then shifts to talk of the rebuilding effort, as well as the help that came from the rest of Canada.

It also asks neighbours elsewhere in Canada to share the video so that others can hear the message of appreciation.

“Thanksgiving is a time to reflect on what we are thankful for, and this weekend we are thankful for the support of Canadians. Your thoughts, prayers, donations, volunteer hours, hand-made gifts, shipments of supplies and kind words are a constant reminder of the care the residents of Wood Buffalo received in their time of need,” the post states.

The fire in May forced over 80,000 people out of the northeastern Alberta city for a month and destroyed 10 per cent of its structures.

In August, the Canadian Red Cross said $299 million had been raised to help with recovery from the Fort McMurray wildfire. Red Cross CEO Conrad Sauve said that included $165 million donated by Canadians to the charity.

The federal government contributed $104 million to match funds donated made by individual Canadians and the province matched $30 million given by individual Albertans.

Water bombers and firefighters from other provinces, including Ontario, B.C., Quebec and New Brunswick, were also involved in fighting the blaze.

“To the people of Canada, to the people of the province of Alberta, to the friends of ours just down the road from Wood Buffalo, every one of you who has put in the effort that you did, you need to know how incredibly grateful we are,” the municipality’s mayor, Melissa Blake, said at the end of the video.

“You need to know that I get to thank you, not only on behalf of my council, but all of the residents of Wood Buffalo for what you’ve given this region. The hope and compassion and support are what’s going to carry us through to a better day,” she added.

Scenes in the video include a home being rebuilt, a classroom of children and a grocery store where staff place pumpkins in a display.

The video was posted to Facebook on Friday. It had over 120,000 views by Sunday afternoon.