Dubbed "the beast" for its merciless unpredictability, the Fort McMurray wildfire garnered 39 of the 67 votes cast by senior editors across Canada 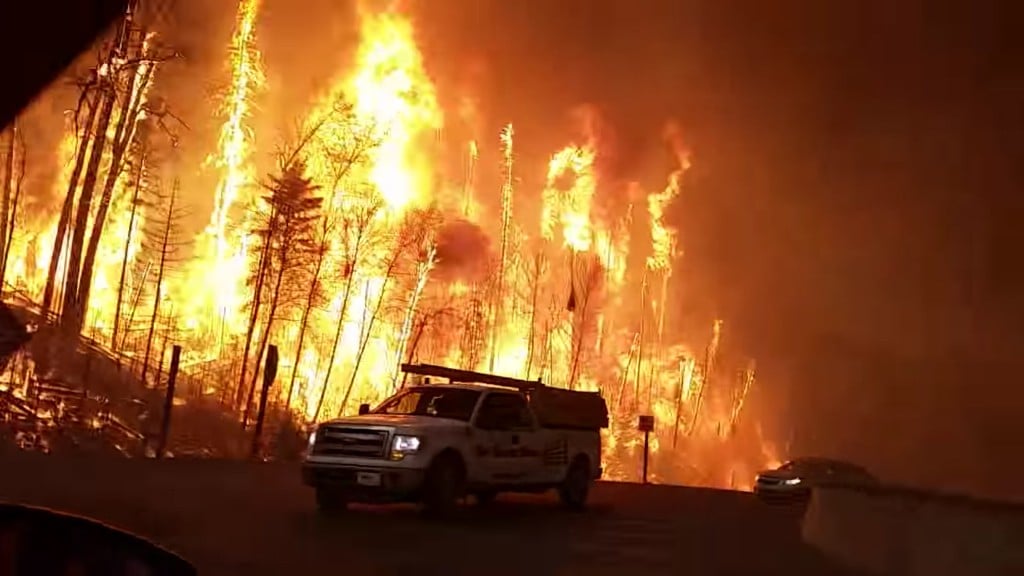 May 9, 2016: For many, the harrowing trip out of the burning town involved getting very close to the fire in Fort McMurray. (Jason Edmondson)

The ferocious wildfire that forced nearly 90,000 to flee Canada’s oilsands region and reduced thousands of homes to rubble has been picked as the top news story of 2016 in an annual survey of newsrooms across Canada by The Canadian Press.

Dubbed “the beast” for its merciless unpredictability, the Fort McMurray wildfire garnered 39 of the 67 votes cast by senior editors. It was followed by Canada’s ongoing resettlement of Syrian refugees with 11 votes, the fentanyl crisis with six and the Tragically Hip’s farewell tour with five.

RELATED: The great escape from the Fort McMurray fire

“Not even a Hollywood script could match the terror, uncertainty, and heroism to come out of what seemed to be a surreal event,” wrote Dave Barry, news director of CKPG TV in Prince George, B.C.

The fire began in a remote forested area southwest of the city on May 1 during a spell of unusually hot and dry spring weather. By suppertime on May 3 the flames were inside the city and all of Fort McMurray was under a mandatory evacuation order.

People fled from their neighourhoods with forest ablaze on both sides of the road and ash raining down. They crawled bumper-to-bumper along Highway 63 — the only route out of town.

Nobody died as a direct result of the fire, though two teenagers were killed in a highway crash south of the city.

MORE: Everything you need to know about the Fort Mac fire

Residents started coming back in early June. The majority returned to unscathed homes, but many had nothing but piles of ash inside blackened foundations.

All told, the fire consumed some 2,400 units, most residential.

Erin O’Neill, operations manager with the municipality’s recovery task force, said 350 rebuilding permits have been approved since the fire and 160 new homes have begun construction.

“When you go into these areas, as opposed to seeing all of that ash and debris, now you’re seeing a site that looks like a new subdivision.”

O’Neill said she’s expecting construction to really pick up in the spring.

Fire Chief Darby Allen, who became the face of the battle against the beast, is planning to retire in February.

He said he’s expecting next year’s wildfire season to be tough on the community, even though there’s not much fuel left to burn.

“I think there will be a lot of tension and trepidation in the public and that’s going to be a challenging time,” he said. “I hope we can find a place to have a little bit of a celebration and remember all the good things that were done.”

Seven months after the fire, many residents are still slogging through their insurance claims. The Insurance Bureau of Canada has pegged the Fort McMurray fire as the costliest insured natural disaster in Canadian history with an estimated $3.77 billion in claims as of mid-November.

There’s also been a heavy emotional toll. Alberta Health Services documented more than 25,000 contacts with mental health care providers in the Wood Buffalo region between May 10 and Oct. 29.

The beast struck at a time when low oil prices were already causing the city’s main industry — the oilsands — to scale back.

“Not only did the fire devastate a wide swath of Alberta but its aftermath had an negative economic impact that continues to ripple across the Canadian economy,” said Paul Samyn, with the Winnipeg Free Press.

Within six month of the fire, the Red Cross raised $319 million between donations and matching government funds — the largest domestic appeal in the organization’s history, said vice-president Jenn McManus.

“Having a population of close to 90,000 people on the move with an evacuation order, that was very alarming for Canadians to witness.”

Many newsroom bosses cited the outpouring of support the city received in making their pick.