In the news today: Carolyn Bennett travels to Attawapiskat 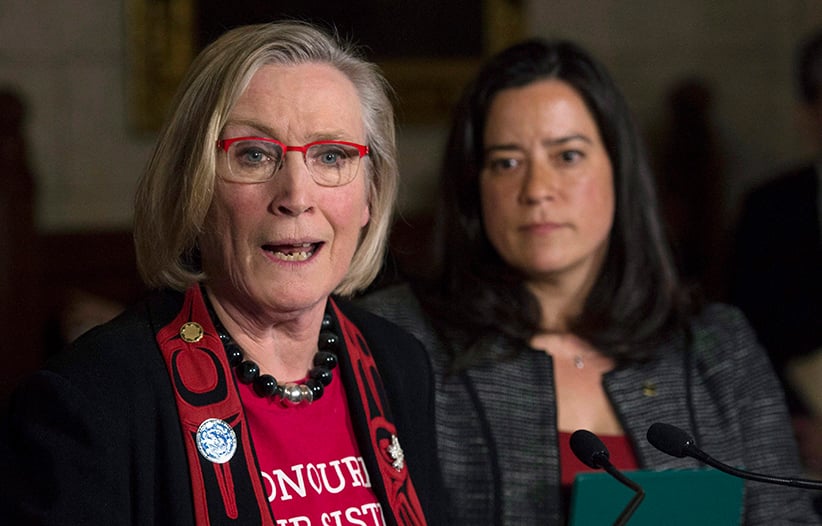 Minister of Justice and Attorney General of Canada Jody Wilson-Raybould looks on as Minister of Indigenous and Northern Affairs Carolyn Bennett responds to a question during an announcement for a Missing and Murdered Indigenous Women inquiry. (Adrian Wyld, CP)

Four stories in the news today:

The chief of a remote First Nation says he hopes a planned meeting with Indigenous and Northern Affairs Minister Carolyn Bennett will be the beginning of real change for Attawapiskat. Increasing suicide attempts by youth in the community on James Bay prompted the northern Ontario First Nation to declare a state of emergency on April 9.

The entrapment trial resumes today for a British Columbia couple found guilty of terrorism who allege they were manipulated by police into plotting to blow up the provincial legislature. Last summer, a jury found John Nuttall and Amanda Korody guilty of planting what the pair believed were deadly pressure-cooker bombs on the legislature lawn in Victoria on Canada Day nearly three years ago.

DOES IT PAY TO LEAVE CANADA FOR TAX REASONS?

So you’re a wealthy Canadian whose tax bill is going up. Does it pay to leave the country? When media outlets reported last month that billionaire Murray Edwards is leaving Calgary for the United Kingdom, some saw it as proof that tax hikes for top earners are driving away the rich.

CANADIANS LIKE THE QUEEN, BUT NOT HER SON: SURVEY

A recent survey suggests most Canadians are supportive of the Queen as the country’s monarch, but the same cannot be said for her heir, Prince Charles. To mark the sovereign’s 90th birthday on April 21, the Angus Reid Institute conducted a survey on Canadians’ views of the monarchy and its key players. The survey suggests that 64 per cent of Canadians support continuing to recognize Elizabeth as Queen, while only 46 per cent support Canada recognizing her heir, 67-year-old Prince Charles.

Related reading: Longer may she reign