For his 25th anniversary, Canada Post dedicates a stamp series to the iconic turtle 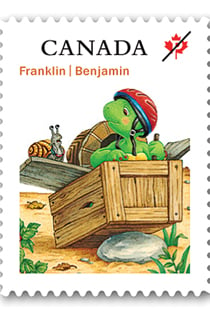 klin the Turtle, who famously could “zip zippers and button buttons, count by twos and tie his shoes,” can also make stamps come alive. Author Paulette Bourgeois’s kid-lit icon is the single most successful franchise in the history of Canadian publishing: 65 million copies of Franklin’s young-child-friendly adventures have been sold in 24 languages in 38 countries; he starred in his own TV series (with theme music by Bruce Cockburn) and even adorned a 1995 Maclean’s cover. And he’s turning 25 this year. To mark the event, on May 11 Canada Post issued its first-ever stamp series celebrating a character from an illustrated Canadian children’s book, depicting Franklin under both of the names he goes by here. He’s Benjamin in Quebec—not to mention Morten in Denmark, Patrik in Sweden and Konrad in Finland. “I read the children Benjamin, and my husband reads them Franklin,” notes Canada Post spokeswoman (and “huge fan”) Anick Losier.

But if Franklin is no ordinary turtle, neither is his moment of philatelic glory of the everyday humdrum kind. The Franklin series is also attached to the launch of Canada Post’s new “augmented reality” app for Apple and Android devices called Stamps Alive. Users can download the app for free and then scan an image on the stamp (or on the stamped package). For the Franklin stamps, the image is a maze. Once scanned, the maze comes to life and Franklin can walk through it, following the user’s finger, to the mailbox to drop in a letter. Small children will love the app, and because “every stamp tells a story, may want to discover the wonderful world of stamps,” says Losier. And perhaps grow up to be future Canada Post customers.