French envoy to Canada says we must open arms to refugees 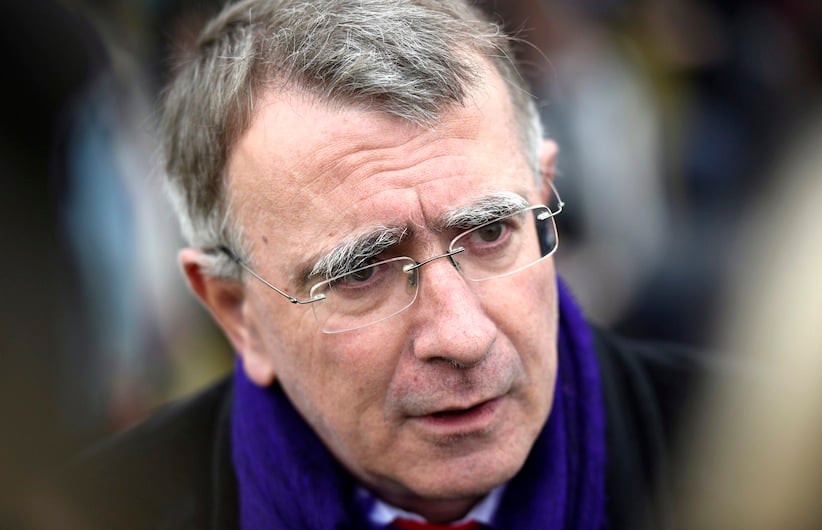 France’s Ambassador to Canada Nicolas Chapuis speaks to reporters following a vigil at Nepean Point, in Ottawa, on Sunday, Nov. 15, 2015, where people gathered to honour the victims of Friday’s attacks in Paris. (Justin Tang/CP)

OTTAWA – Nicolas Chapuis, the French ambassador to Canada, was busy in his office Friday and had no idea of the carnage unfolding in Paris until he received a painfully short email note from his son, who is studying for his doctorate back home.

The note, puzzling at first, struck like a thunderbolt when the seasoned diplomat turned to see what was happening. And like the most of the rest of the world, he watched in horror and disgust throughout Friday as at least 129 people were slaughtered in separate, co-ordinated attacks around the French capital.

“I didn’t know something had happened and so I went online,” Chapuis said Sunday as at least 100 people — many of them expat French citizens —braved the chilly November afternoon and laid flowers and candles at the foot of Ottawa’s monument to explorer Samuel de Champlain. The mourners wrapped themselves in the tri-colour flag and a young boy waved it defiantly on the hillside before the ambassador spoke.

“It was mid-afternoon in Ottawa and I saw the magnitude of what was developing. It took a few hours to get an idea of how grave; how atrocious the attacks has been.”

Still visibly shaken at times, Chapuis vowed the horrific events would not affect his country’s policy towards the still ongoing Syrian refugee crisis, even though a Syrian passport was found among the remains of one of the suicide bombers that struck the soccer stadium.

The lead, which has yet to be verified, casts a shadow over efforts by both France — and now the Trudeau government — to give safe haven to some of the tens of thousands of refugees and migrants who’ve flooded across Europe since the spring.

“Let’s not be mistaken. France has always been a land of asylum, like Canada,” he said. “The people who are seeking refuge are not the barbarians. They are fleeing the barbarians.”

The refugees are victims of the cruelty of the Islamic State in Iraq and the Levant, who are only asking to live in freedom and peace, Chapuis said.

“Certainly there will be individuals who are going to try to take opportunity to mix with the refugees in order to spread chaos, but let there be no be mistake: This should not stop us from opening our arms and helping those who are seeking our help. It is part of our humanity.”

The eloquent remarks could have the effect of stiffening the Trudeau government, which faces renewed concern and questions about the planned resettlement of 25,000 Syrian refugees before the end of the year — one of its signature campaign initiatives.

Quebec Premier Philippe Couillard also urged Canadians to remain open to the arrival of refugees despite heightened security fears in the wake of the Paris attacks.

Public Safety Minister Ralph Goodale did the television news show circuit on the weekend, attempting to reassure the public that the newly-elected government would take nothing for granted as it puts individuals through different layers of screening, both in refugee camps and after they arrive in Canada.

Canadian warplanes were in action Sunday. The military said on its website that two CF-18s struck an ISIL fighting position near the Iraqi city of Haditha using precision guided munitions.

Chapuis says consultations will take place in western capitals over the next few days on how the world can rise up collectively against the Islamic State of Iraq and the Levant.

He was careful not to comment on the Trudeau government’s planned refocusing away from combat and towards training local forces, but made it clear he believed Friday’s attacks were an assault on civilization.

“Let’s stand united, resolute, in our determination to fight the ‘death,'” he said. “We are the ‘life.’ They are the ‘death’ and this is a battle against ‘death.'”

Former defence minister Jason Kenney and even some U.S. presidential hopefuls have mused about the possibility of France asking NATO to invoke its Article 5 self defence clause, which says an attack on one nation is an attack on every alliance member.

The last time that happened was after the Sept. 11 terror attacks on New York and Washington.

From Paul Wells: Justin Trudeau, NATO and the problem with backseat ministering

Chapuis says he doesn’t know yet whether the brutal attacks rise to that level of a formal response from NATO, but he noted President Francois Hollande called them and an “act of war” and French warplanes took to the sky Sunday to pound targets in Raqqa, the nominal capital of the Islamic State.

Photo gallery: Paris mourns in the morning after.