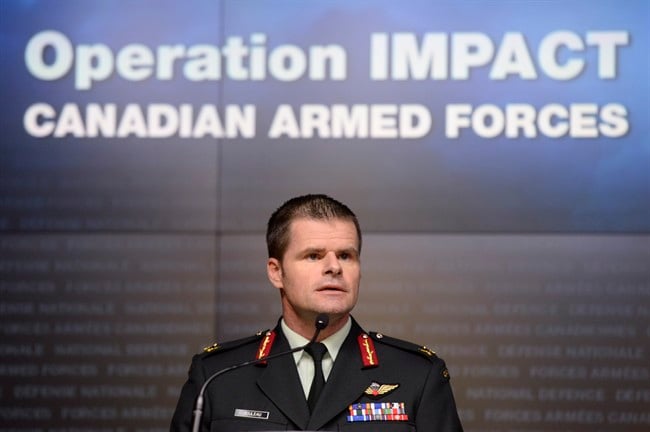 OTTAWA – The friendly-fire incident in Iraq that killed Sgt. Andrew Doiron two months ago was the result of “a tragic case of mistaken identity,” exacerbated by fatigue and a breakdown in communications, the Canadian military says.

Doiron, a special forces operator, was fatally shot March 6 by Kurdish forces as his special forces unit was returning to an observation post in the darkness.

Three other Canadians were wounded in the incident.

A series of investigations concluded that “mistaken identity and a breakdown in communication in a setting characterized by tension, fatigue and confusion” were the main factors in the death.

Brig.-Gen. Mike Rouleau told a news conference that a shift change among Kurdish troops responsible for the shooting was also a major contributing factor to the tragedy.

As expected, the reports clear Canadian trainers of blame in Doiron’s death.

They say Doiron’s team had visited the observation post earlier in the day and had made arrangements to return, but a shift change meant the new Kurdish crew members weren’t expecting the Canadians.

They were, however, expecting an attack by militants.

“It is reasonable to conclude that the Kurdish soldiers were extremely sensitive to the heightened danger they believed they were facing,” a military summary said.

“As a result, it is reasonable to believe that they would have perceived any movement, regardless of the nature, to be life-threatening.”

Doiron and his patrol used accepted procedures to identify themselves, but that was complicated by darkness.

“The identification procedures used by Sgt. Doiron and his detachment were wholly consistent with what had been used since the start of the mission in October, 2014 and were well-practised with the Kurdish forces,” the military summary said.

“Nevertheless, it must always be noted that the complexities of conducting a link-up with other forces during the night is a complicated task due to the difficulties in accurately identifying and visually distinguishing friendly forces in very low light conditions as experienced on that night.”

Doiron is the first Canadian soldier to die as part of Canada’s military effort in Iraq, which began last fall.

Rouleau said the military will make some changes in the way it operates in Iraq, but the change won’t have a major impact on operations.

“We draw lessons from every incident,” he said.

One lesson will ensure that Canadian soldiers moving after dark will be accompanied by a Kurdish soldier to deal with the language problem.

“Language barriers are always a reality of our business,” Rouleau said.

Of the three soldiers wounded alongside Doiron, one remains under treatment, but still wants to return to action. Another was brought back to Canada for treatment and the third remains in Iraq.