G7 puts Canada on the spot, calls for low emissions in energy sector

The G7 agrees to a full-blown no-carbon economy, but not until 2100; Harper says Canada's energy sector will have to transform itself 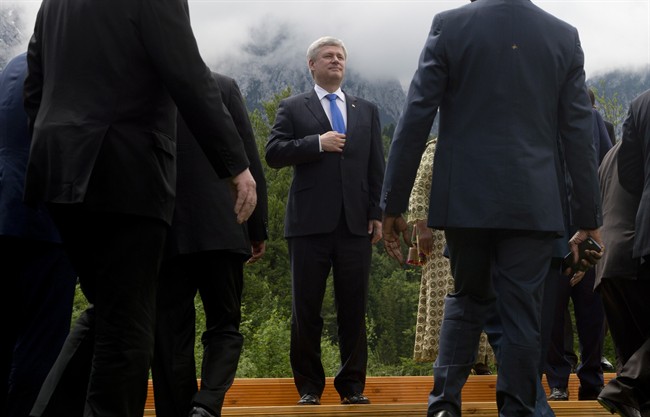 He was commenting at the end of the G7 leaders’ summit which called on its members to put their energy sectors on a low-carbon footing by 2050, a move with serious implications for Canada’s greenhouse-gas-emitting oilsands.

German Chancellor Angela Merkel fell short of her goal of pushing her fellow leaders to a broad, iron-clad commitment to a low-carbon economy by 2050. Instead, the G7 agreed to a full-blown no-carbon economy, but not until 2100.

“We commit to doing our part to achieve a low-carbon global economy in the long-term, including developing and deploying innovative technologies striving for a transformation of the energy sectors by 2050 and invite all countries to join us in this endeavour,” the leaders said in their final communique.

“To this end we also commit to develop long-term, national low-carbon strategies.”

Asked what this means for Canada’s energy sector, Harper said:

“Nobody’s going to start to shut down their industries or turn off the lights. We simply got to find a way to create lower-carbon emitting sources of energy.”

Harper took part the G7 leaders’ shortened talks on climate change as the summit entered its second and final day.

“All leaders understand that to achieve these kinds of milestones over the decades to come will require serious technological transformation,” Harper said.

The Canadian Press has been told by sources who saw the working draft of the G7’s climate-change communique that Canada and Japan worked behind the scenes to water down the statement.

Merkel placed the fight against climate change at the heart of her sweeping agenda.

She wanted the G7 summit to give France momentum when it hosts the United Nations climate change conference this December, which aims to reach a breakthrough agreement in the fight to reduce greenhouse gas emissions.

Merkel had been pushing the G7 to endorse a pledge to reach zero carbon emissions, but Canada and Japan were holdouts.

“Canada and Japan are the most concerned about this one,” said one source who was privy to discussions but would only speak on the condition of anonymity.

“The two of those countries have been the most difficult on every issue on climate. They don’t want any types of targets in there, so I think they are trying to make it as vague as possible at this point.”

Harper and Merkel spoke together on Sunday, but the prime minister’s office said they did not discuss climate change.

“It’s shocking that Mr. Harper didn’t even bother to bring up climate change as an issue for discussion during his bilateral meeting with Chancellor Merkel,” said New Democrat foreign affairs critic Paul Dewar.

He said Harper is out of touch and sidelining Canada internationally.

“Other G7 countries have very clearly identified strong and immediate actions to tackle climate change,” McKay said in a statement. “Unfortunately, Mr. Harper is fixated on ensuring that he obstructs all progress nationally or internationally.”

Harper’s office said in a statement that today’s French-led climate talks focused on the “collective response to reduce greenhouse gas emissions and the advancement of energy security in the face of escalating threats.”

It said the G7 leaders chose to devote a portion of the climate session to a discussion of global security threats posed by Boko Haram militants in Nigeria and the ongoing fight against Islamic militants in Iraq and Syria. Harper’s only bilateral meeting on Monday was with newly elected Nigerian President Muhammadu Buhari.

A senior Canadian government official, speaking on the condition on anonymity, said Canada endorses a statement by the G7 that would support the December climate change talks in France.

“We support agreement in Paris that includes all GHG emitting countries,” the official said, noting that in 2013 Canada’s emissions were 3.1 per cent below 2005 levels.

While Canada’s emissions did drop below 2005 levels during the 2008-09 global recession, Environment Canada data shows they have been on a slow, steady increase for four years in a row up to 2013, the most recent year for which data is available.

“We believe we have a fair and ambitious reduction target that is in line with other major industrialized economies. It reflects our national circumstance,” the Canadian official said.

“It’s pretty clear that Canada and Japan are in a different place than the rest of the G7 on the issue of climate change,” said Jennifer Morgan, director of the global climate program at the Washington, D.C.-based World Resources Institute.