The union representing thousands of Oshawa workers pledges 'the fight of our lives' to save jobs, as GM shifts to electric and automated vehicles 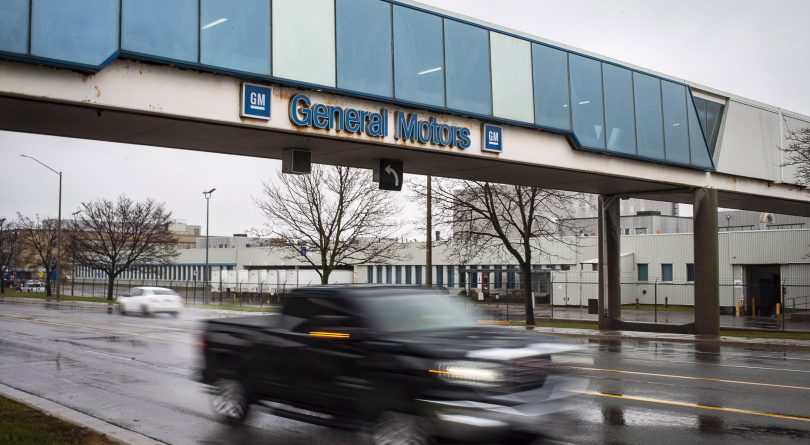 TORONTO — General Motors will close its production plant in Oshawa, Ont., along with four facilities in the U.S. as part of a global reorganization that will see the company focus on electric and autonomous vehicle programs.

The auto manufacturer announced the closures as part of a sweeping strategy to transform its product line and manufacturing process to meet changing demand in the transportation industry, a plan that it said will save the company US$6 billion by the year 2020.

“This industry is changing very rapidly, when you look at all of the transformative technologies, be it propulsion, autonomous driving… These are things we’re doing to strengthen the core business,” GM chief executive and chairwoman Mary Barra told reporters Monday. “We think it’s appropriate to do it at a time, and get in front of it, while the company is strong and while the economy is strong.”

GM also said it will reduce salaried and salaried contract staff by 15 per cent, which includes 25 per cent fewer executives. The US$6 billion in savings includes cost reductions of US$4.5 billion and lower capital expenditure annually of almost US$1.5 billion.

READ MORE: Why did Donald Trump bring up the Chevrolet Impala?

Dozens of workers were seen walking out of the Oshawa Assembly Plant on Monday morning, with some saying they were very unhappy with news of the planned closure.

The impending shutdown is “scary,” said Matt Smith, who has worked at the Oshawa plant for 12 years. He said his wife also works at the GM facility and the pair have an 11-month-old at home.

“I don’t know how I’m going to feed my family,” he said outside of the plant’s south gate, where workers instituted a blockade for trucks from the entrance.

“It’s hard, it’s horrible? We have always been the best plant in North America. It’s a kick in the nuts.”
Unifor, the union representing more than 2,500 workers at the plant, said it has been told that there is no product allocated to the Oshawa plant past December 2019.

Unifor Local 222 shop chairman Greg Moffat said Monday the plant is not closing “without the fight of our lives.”
The Oshawa Assembly Plant employs 2,522 workers with Unifor Local 222, according to GM’s website. Production began on Nov. 7, 1953, and in the 1980s the plant employed roughly 23,000 people.

GM is also closing the Detroit-Hamtramck Assembly plant in Detroit and the Lordstown Assembly in Warren, Ohio in 2019. GM propulsion plants in White Marsh, Md., and Warren, Mich., are also due to close as well.

The automaker did not say the plants would close, but used the term “unallocated,” which means no future products would be allocated to these facilities next year.

On top of the previously announced closure of the assembly plant in Gunsan, Korea, GM will also cease the operations of two additional plants outside North America by the end of next year.

The closures come as North American automakers feel pressure from U.S. tariffs on imported steel and aluminum. Last month, GM rival Ford Motor. Co. reported a US$991 million profit during its third quarter, but said tariffs cost the company about US$1 billion. Of that amount, US$600 million was due largely to U.S. tariffs on imported steel and US$200 million from retaliatory tariffs imposed by China on American vehicles, Ford said.

The restructuring announcement also comes after Canada and the U.S. reached the United States-Mexico-Canada Agreement to replace the North American Free Trade Agreement, after months of strained negotiations.

Under the new trade deal, 40 per cent of the content of automobiles must be produced by workers earning at least US$16 per hour to qualify for duty-free movement across the continent. The agreement also stipulates that 75 per cent of the automobile’s contents must be made in North America in order to be tariff-free.

Last month, as GM reported a US$2.5-billion third-quarter profit, the automaker also said it was aiming to cut costs by offering buyouts to roughly 18,000 white-collar workers with 12 or more years of service. That represented more than one third of the company’s 50,000 salaried workers across North America. Workers had until Nov. 19 to decide, and they would have to exit by the end of the year.

Meanwhile, GM’s Barra said Monday the company will be investing in autonomous and electric vehicle technology. Vehicles have become more “software-oriented” and GM will be looking to hire more employees with the “right skill set” going forward, she said.

“You will see us have new employees joining the company as others leave the company,” Barra said.

The changes announced Monday will not impact GM’s new trucks and SUVs, which are Barra said are “doing very well.”
The Oshawa plant, however, has been producing an older model, she said.

“Oshawa is building the previous generation trucks that are very helpful in the crossover period… As we’re transitioning to the new truck architecture,” she said.

In addition to the Oshawa assembly plant, GM has an engine and transmission plant in St. Catharines, Ont. and the CAMI Assembly plant in Ingersoll, Ont.

Ontario Premier Doug Ford said it was a “difficult day” for the Oshawa plant workers, Ontario auto part suppliers and their families.

The provincial government has begun exploring measures to help impacted workers, businesses and communities cope with the “aftermath of this decision,” including a training program to help local workers to regain employment as quickly as possible, Ford added.

“It is disappointing that GM failed to see and build upon this competitive advantage,” said Ford in a statement on Monday.

“While the company is entitled to make its own business decisions, I am confident that history will prove them wrong.”

—with files from Ian Bickis in Oshawa