‘They couldn't take away our faith’

Her eyes have clouded, and she unpacks her memories with grandmotherly deliberateness. But the girl who survived a Nazi concentration camp—sneaking out letters to relatives, secretly marking Jewish holidays—still shines through. “They took everything away from us,” says 90-year-old Gerda Frieberg during an interview at her high-rise apartment in Toronto. “Our parents, our homes, my chance of an education. But they couldn’t take away our faith. They couldn’t take away our hope.”

Gerda was 16 when police sent her and her sister Hana to Ober Altstadt, part of the notorious Gross-Rosen network of concentration camps in southeastern Poland. She’d grown up in relative peace amid mostly German neighbours in Bielschowitz, a village in Upper Silesia, then part of Poland. Her father, Josef, a general-store owner, had won a medal for bravery, fighting for Germany during the First World War.

FROM THE ARCHIVES: In 1980, Maclean’s reported on how children of survivors were “Living with the Ghosts of the Holocaust”

That counted for nothing in September 1939. Days after Poland fell, Josef was rounded up along with thousands of other Jewish men and sent away to perform slave labour for the Nazis. Gerda vividly recalls the last day she set eyes on him. It was April 1942, and she was temporarily housed in a repurposed jail, en route to Ober Altstadt. Her father had managed to get her a note telling her to come to a certain window at an appointed time—he was to be on a work crew on the roof of a building across the street. “I could see him waving his arms,” she recalls, “but there were so many windows in the building where I was, he never saw me.” Her eyes fill at the memory.

By 1943, all four members of her family, including her mother, Elfriede, wound up in forced-labour camps, spinning flax, running metal lathes, freezing in uninsulated barracks and praying they’d stay healthy enough to avoid the gas chambers. For Gerda, to survive was to vanquish the Nazis, and she worked hard to win over factory operators, knowing they’d help protect her from the savagery of the SS guards. Gerda, her sister and her mother all lived, but it took 50 years and a chance meeting with a fellow survivor to learn her father’s probable fate. During a commemoration ceremony in New York, a man who’d worked alongside Josef in Langenbielau, a satellite camp of Gross-Rosen, told her that her father had contracted typhus in February 1945 and was sent away—likely to a death camp. 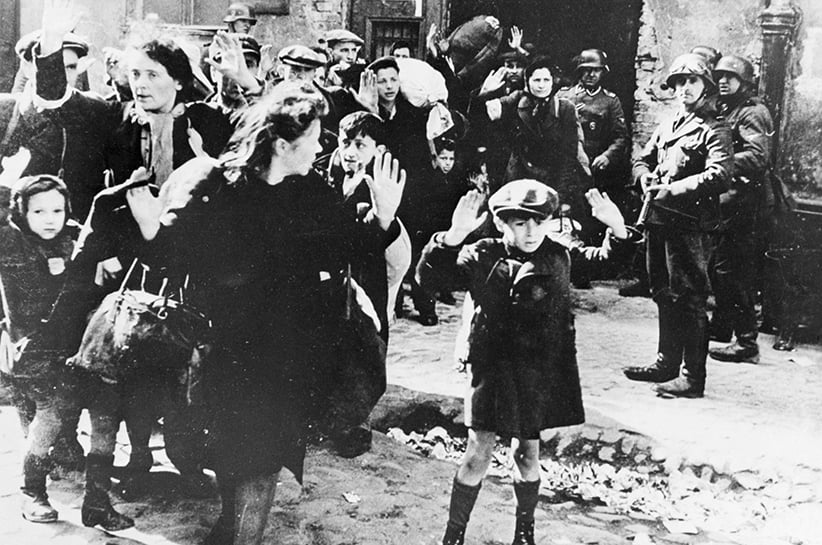 Polish women and children surrounded by storm troopers during the Nazi destruction of Warsaw in 1943. (Bettmann/Getty Images)

Her own three years of hunger, sickness and despair ended on May 9, 1945, when the Soviet army liberated Ober Altstadt, and she emerged determined to make something of her life. An interlude in European displacement camps, followed by a 2½-year stay in the freshly founded state of Israel, led Gerda and her newlywed husband, Lou, to immigrate to Canada in 1953. They started modestly—she in a Toronto sweatshop, he as a carpenter—and within a couple of years, they’d founded their own construction company. They rode Ontario’s late-century development wave to prosperity, and today, one of their sons owns the downtown building where she sewed.

Through it all, Gerda remained a determined warrior, telling her story in the hope it might head off a recurrence of this terrible chapter of history. She checklists the haters in Canada she’s confronted: the Holocaust denier Ernst Zündel, the white supremacist Wolfgang Droege and assorted skinheads and neo-Nazis. “There is no room for both of us here,” she told Droege outside a courtroom in the early 1990s, “and I am staying.” Her 2013 book I Kept My Promise records the darkest hours of her experience; a forthcoming sequel will recount her efforts in Canada to preserve Holocaust history while promoting the cause of political refugees. But her resolve is underlaid with a surprising current of tolerance—a belief that, given a chance, the better instincts of any society will prevail. “There will be bigots everywhere,” she says. “But you cannot judge a whole population by them.” — Charlie Gillis