Gold, Silver and a Sea of Tears 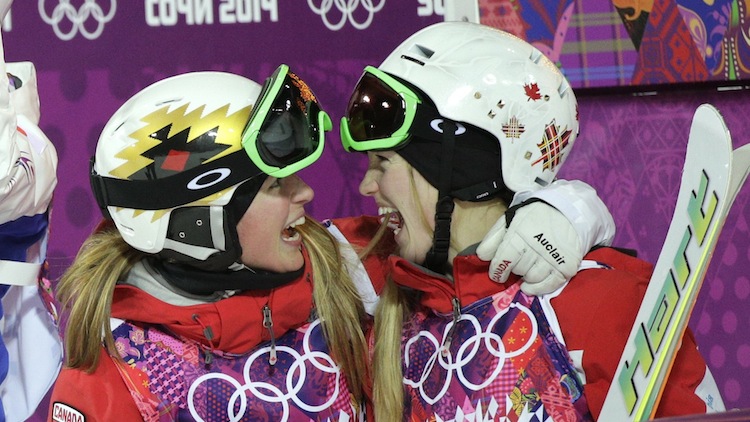 Standing behind the Olympic podium, in front of the whole world, Justine and Chloé Dufour-Lapointe made time for a quiet family moment. Joining their hands, briefly locking eyes and murmuring a few words just before they were officially announced as the winners of gold and silver in the women’s moguls. Justine—just 19, at her first Olympics and now, suddenly, a champion—was feeling a bit lost.

“I couldn’t imagine that I was going up on the first step of the podium. I was in shock,” she explained afterwards, eyes still filled with tears. “And I saw Chloé and I felt calm again. I told her we’ll live that moment together and it will feel like home.”

It could hardly feel like anyplace else. Their elder sister Maxime, who made it through to the second round of the finals, ultimately finishing 12th overall, was only steps away. And their parents, Johanne Dufour and Yves Lapointe, were only a few metres further along, crying madly and howling in joy.

“On the podium, I heard them screaming, it wasn’t anyone else. It was them,” said Justine. “I think they are even happier than me. They are over happy.”

Providing Canada its first gold and silver of the 2014 Olympic Winter Games in Sochi, and third medal overall on the first real day of competition, fulfilled many dreams. Four years ago in Vancouver, Chloé, now 22, had placed a heartbreaking fifth in her first Olympics. Just over a year ago, at a World Cup moguls event in Calgary, they got a taste of what might lie ahead, finishing one-two. But the emotions were hardly the same.

“It means a lot to be on the podium with my sister,” said Chloé, her eyes too filled with tears. “It has happened on the World Cup, but here it’s the Olympics. It’s the big game. You have all the pressure of the world on you.”

Maxime, who celebrated her 25th birthday when the clock ticked over to Feb. 9, just minutes after the competition ended, had been the first to take up the sport, and the last to punch her ticket to Sochi, understands what it takes. “It’s always on you. Whatever you do on the hill you can’t blame anyone else,” she said. Her little sisters credit her as their inspiration and mentor, but on this night Maxime would make no claim to sharing the victory. “It’s theirs. The path that we walked, we did it side by side. I’m very proud of them. Now I have the two best in the world to learn from them and get as good as them,” she said, crying, as is the family custom.

The magnitude of the Dufour-Lapointe’s accomplishment can be measured in who was relegated to the third step of the podium. Hannah Kearney of the United States won gold in Vancouver, and has been the World champion for four years running. She was wearing the number one bib as the top qualifier, and led coming into the final round. But a slight stumble in her landing after a high flip opened the door for the Montrealers, and they barged right in. Justine nailed her 360 jump and back-flip cross and bumped her way down the course at speed. And Chloé was almost her equal, finishing just two-and-a-half points behind. Kearney met the media shedding bitter tears of disappointment. “I went to the top and there’s nowhere to go but fall. And I fell,” she said.

The double victory, and strong showings by Maxime, and fellow Quebecer Audrey Robichaud, who finished 11th, kicked the Games off in a big way for Team Canada. Marcel Aubut, the president of the Canadian Olympic Committee, was on hand to shower the sisters with kisses. And Jean-Luc Brassard, the assistant chef de mission, and an Olympic champion in the same discipline in 1994 at Lillehammer, paid them tribute, with, of course, tears in his eyes. “What happened tonight was not up to chance,” he said. “They had it planned for a long time. This is what they wanted to achieve. They did what they had to do.”

There was at least one other moment that was entirely unscripted, however. As Justine, now the youngest Olympic champion in the history of the sport, crossed the line she bent to one knee and mimed a might rift on an imaginary guitar.  “I love Guitar Hero,” she explained.  “I just started this Christmas, but now I am an addict.” And she flashed a smile.