'This wasn't my first canoe ride. I know what happens next; if I don't take charge, half the band goes one way and half goes the other,' The Hip frontman writes 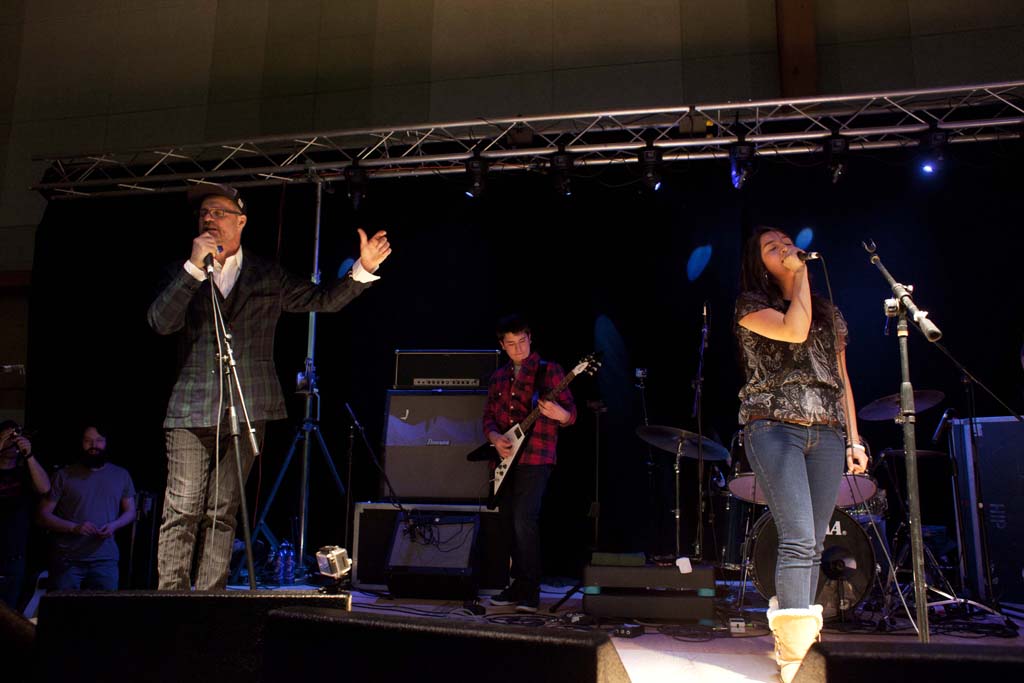 Gord Downie performs with Northern Revolution during the Great Moon Gathering in February 2016, a conference on Native education in Fort Albany. (Photograph by Andrew Tolson)

We had landed in Fort Albany and gone over to the school to meet everyone, to get a little dinner. I hadn’t been there long before I was approached by these towering identical teens who introduced themselves as Cory and Cody. They were very quiet, very polite, very serious and to-the-point: “We’re opening up for you tomorrow night,” they said.  “We’d like you to sing with us.”

“’Knockin On Heaven’s Door’,” they replied.

“Great!” I said, a little relieved. “I even know that one.”  It is a song I played in my first band, when I was about their age. It is a song that most rock musicians play in their first bands.

But Cory—or Cody—interrupted my thought, blurting, “The Guns N Roses version.” It was the way they said it, “Guns N Roses version”—emphatically or something—that made me think that there might be a discernible difference between the version I knew and the one they’d rehearsed. The way Cody, or Cory, said ‘Guns N Roses version’ made me realize that they had worked on this song’s every note and nuance.

READ: North of the 52nd with the Tragically Hip

Cory, or Cody, introduced me around to the rest of the band, Braiden on guitar, Evan on Drums. The band seemed to naturally defer to Braiden when I asked how they wanted it all to go. Braiden had a definite idea of how it all would go. He walked me through it.  (I’ve never been good with arrangements.) I nodded my understanding, but I guess I didn’t mean it. We said our goodbyes, and I told them I’d see them the next night, at the stage. Oh! I turned and asked them, “Hey, what are you guys called?” Cody, or maybe it was Cory, said, “Northern Revolution. We just came up with it today.” 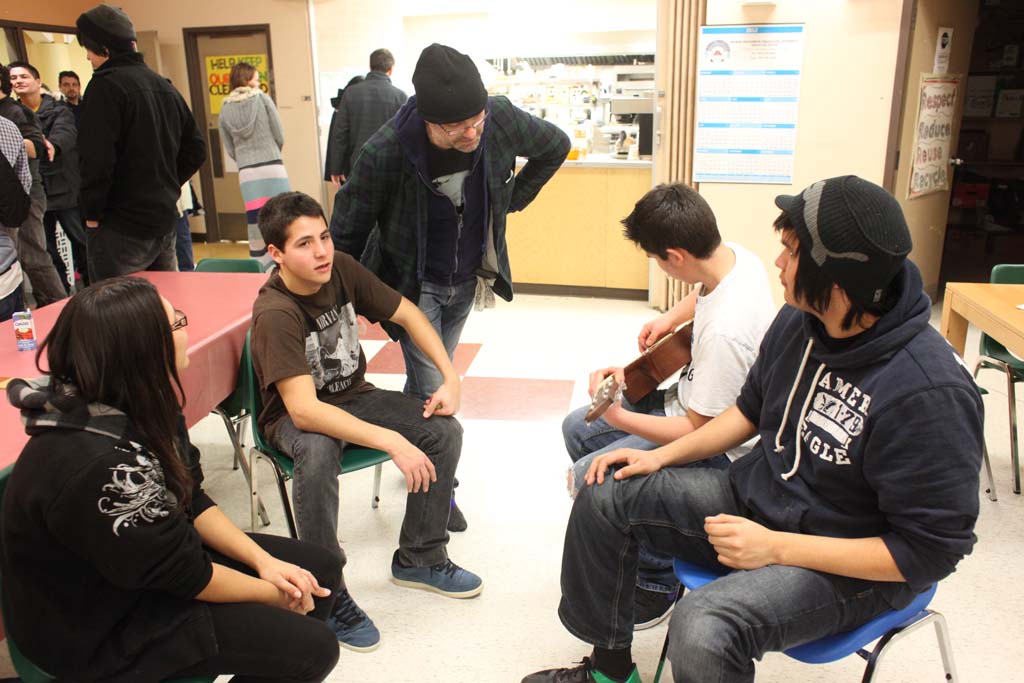 Northern Revolution band members during the Great Moon Gathering in February 2016, a conference on Native education in Fort Albany. (Photograph by Andrew Tolson)

Next night, I got to the gym around 8 o’clock and the evening’s entertainment was already underway. Northern Revolution gathered, side stage. The boys were wide-eyed nervous. I could tell. I yelled to them over the musical act onstage, “You’re nervous, because this means something.” Just then, Braiden introduced me to their singer, a young girl named ‘Rosette’ (except her name is Roseanne—I asked twice and only heard ‘Rosette.’ Fuck!).

Anyway, I was aghast. “You mean you guys bumped your singer for me?!” I yelled to the boys. “I don’t do that! This is your singer! You never bump your singer for anyone!” Roseanne jumped in, quickly, to reassure me that she didn’t want to sing ‘Knockin’ On Heaven’s Door,’ that it was too high for her or something. I looked at the guys to make sure. They nodded.

It was time.  Northern Revolution took to the plywood stage, and the place went nuts. They played their first song just the way they’d rehearsed it. When it was finished, I passed Roseanne as she was stepping off the stage. ‘Nice one!” I yelled to her. I walked to my mic and immediately turned and announced Roseanne back to the stage.

She looked at me with a mixture of shock and something else, but it wasn’t anger. She joined me, maybe reluctantly, and took her rightful place centre stage.

We started, just the way Braiden said we should, with a plaintive note-for-note Slash-like intro to ‘Knockin’ On Heaven’s Door.’ I started to sing, “Mama take this badge offa me…” and we were away. Roseanne knew just what to do and eased in the harmony. It was exactly right. Everything that hadn’t been rehearsed was taking over—as it should be—everything that isn’t rehearsed is called ‘the emotion.’

First verse gave way to first chorus and the crowd was with us. We were all experiencing that click of a moment when relief (on everyone’s part, audience and performer) starts to give way to the possibility of more, to the out-of-the-ordinary or perhaps even transcendence. It was feeling good.

But, now for verse two. I jumped in. I went for it. It just felt right. I launched into the second verse: “Mama bury my guns in the ground.”

I looked back at Braiden; he was shaking his head vigorously back and forth. “Wrong! No!” he was saying with his eyes. We had a decision to make and a barre to make it. I’d already started singing. I thought, “This kid is shaking me off!” What to do? Return back to a re-intro and risk throwing everyone out of sync?

This wasn’t my first canoe ride. I know what happens next; if I don’t take charge, half the band goes one way and half goes the other and you wish for a power outage or for the stage to collapse to get you out of there. I am the singer. I do what a singer does. I keep singing; “I can’t shoot them anymore…” Everyone on stage looks a panic; this is not how they rehearsed it! “Stay with me, Braiden!” I bellow, and I’m thinking to myself, “and if you do I will set you up for a gym-melting guitar solo.”

We get through the second verse and chorus with four wheels still on the wagon. And the table is set, Cory –or was it Cody?—tears off a guitar solo that makes his mother cry with pride and makes all the other girls cry for something else.

Not only do we get out of the song alive, we flourish. In a brief moment, we all look at each other the way bands have looked at each other for centuries, with the ‘What just happened?’ look that only comes with suddenly knowing you’ve done something that means something.

I had many incredible experiences during my 48 hours in Fort Albany, many moments of togetherness and beauty, of majesty and quietude and hilarity, but nothing quite like my three-and-a-half minute, ‘back to the future,’ rocket ride with Northern Revolution.

Gord Downie is the lead singer of the Tragically Hip.

NOW READ: The members of Northern Revolution on opening for The Hip