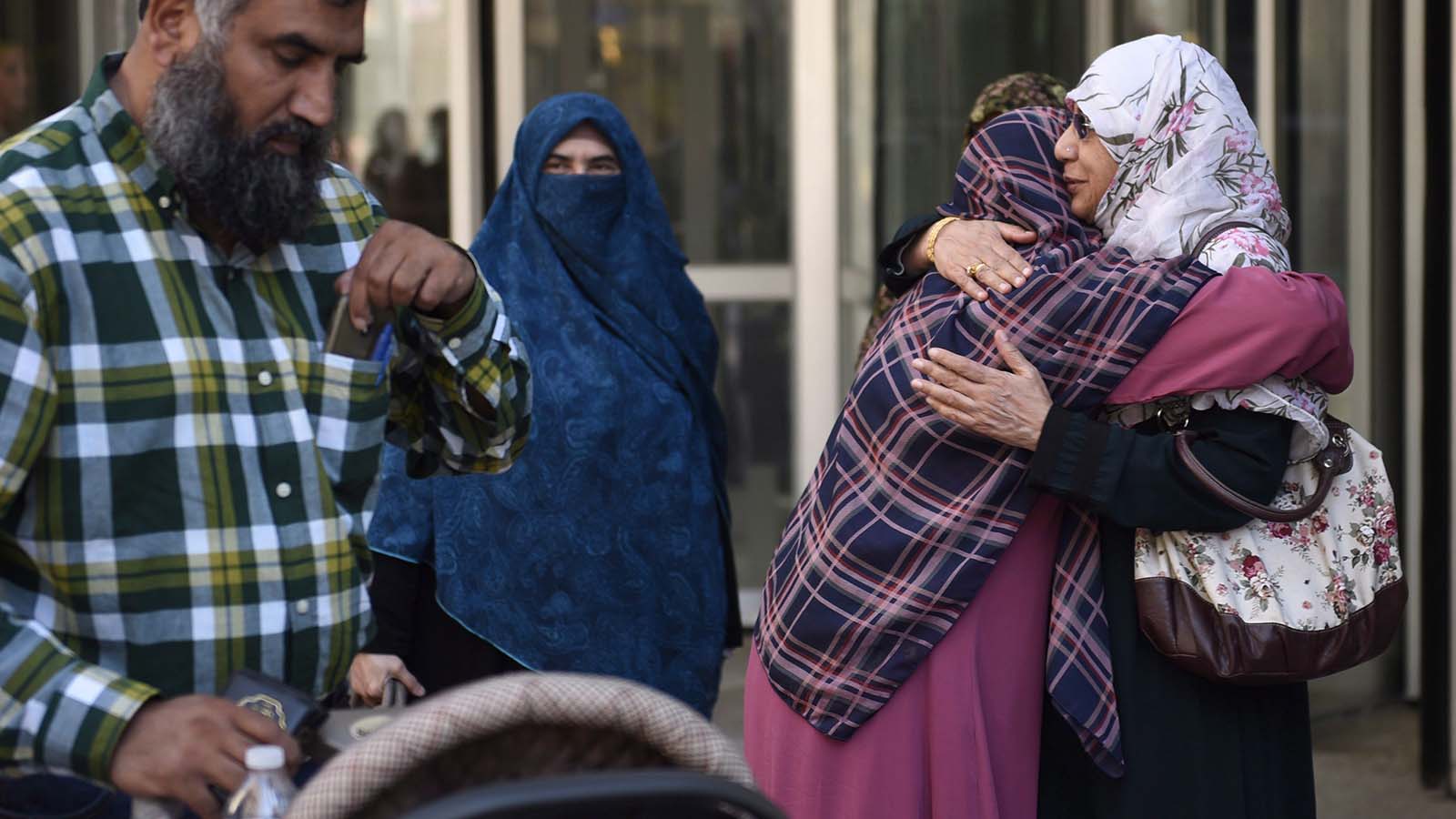 Zunera Ishaq (second from right) is embraced by her friend Nusrat Wahid after the Federal Court of Appeal overturned a ban on the wearing niqabs at citizenship ceremonies, in Ottawa on Tuesday, Sept. 15, 2015. (Justin Tang/CP)

TORONTO – The woman whose fight to wear a niqab during her Canadian citizenship ceremony has unexpectedly become a dominant election issue fears the raging debate has tarnished Canadians’ views of her fellow Muslims.

Zunera Ishaq said much of the discussion swirling around the issue in recent weeks has been based on misconceptions about Islam, the niqab and the women who embrace both.

The university-educated Ishaq, 29, attributed much of that misinformation to the Conservative government, accusing Prime Minister Stephen Harper of turning her personal choice into a national vote-getting strategy. She fears the tactic may be working.

“(The public) is not informed,” she told The Canadian Press in an interview.

“They are being misguided by the government on this particular issue. They were of the view that Muslim women who are wearing the niqab objected to show their identity for security purposes, but that’s not the case …. The image of Muslim women, and as a whole the Muslim community, has been damaged by this.”

The Conservative party did not immediately respond to a request for comment.

The niqab controversy stems from a 2011 government policy banning new Canadians from wearing face coverings while taking their citizenship oaths. Ishaq refused to do so on religious grounds, and her efforts to challenge the new rules have resulted in a spate of legal wrangling.

The government has refused to back down, however, saying the issue will now be heard before the Supreme Court of Canada.

Harper has consistently argued that showing one’s face at the moment of becoming a Canadian citizen is consistent with Canada’s values and a necessary measure to ensure national security.

“The reality is that we recognize that from time to time, we must not hide our identity,” Harper recently said in a French-language debate. “We do that for reasonable reasons and it’s necessary to have legislation, it’s supported by the population, we want to encourage equality between men and women in Canada.”

He doubled down on the issue in a recent interview, telling CBC his government would consider banning niqabs across the public service if re-elected.

Ishaq said positioning the niqab issue as a security concern is misleading, adding she has never resisted efforts to verify her identity and has willingly removed her face covering in the presence of a female official.

The debate has contributed to unfair stereotypes about the Muslim community, she said, adding she takes exception to claims that the niqab is a symbol of female repression that is forced upon poorly educated women being dominated by their male family members.

Ishaq said she initially didn’t wish to wear a niqab while living in Pakistan, but changed her mind at the age of 15 after observing some inspiring female teachers doing so.

She added she was the one in her family who researched its religious significance, concluded that it was in accord with her beliefs and ultimately persuaded some family members to join her in wearing it.

Canadians have been largely accepting of her niqab in the seven years since she moved to Ontario, Ishaq said, but there’s been a shift since the niqab debate took centre stage.

“When we are there and we are talking with them, there has never, ever been any difficulty to communicate with us and they have no negative attitude towards us. But now a situation has been created by saying very targeted wording like ‘this comes from the anti-women culture’ and stuff like this which has no grounds at all,” she said.

Ishaq, who expects to be formally made a citizen in time to cast a ballot on Oct. 19, said she fears the current rhetoric could shatter Canada’s image as a multicultural society.

She hopes, however, that educating Canadians on the facts of both her case and her faith will be enough to keep that image alive.

“If we’ll go in public and tell them what is the truth, they’ll be convinced that this is not reality, actually, and what they are being given, the information is not right.”