Khadr's case is back before the Supreme Court for a third time, with lawyers looking to declare him an adult offender for crimes he pleaded guilty to committing at 15 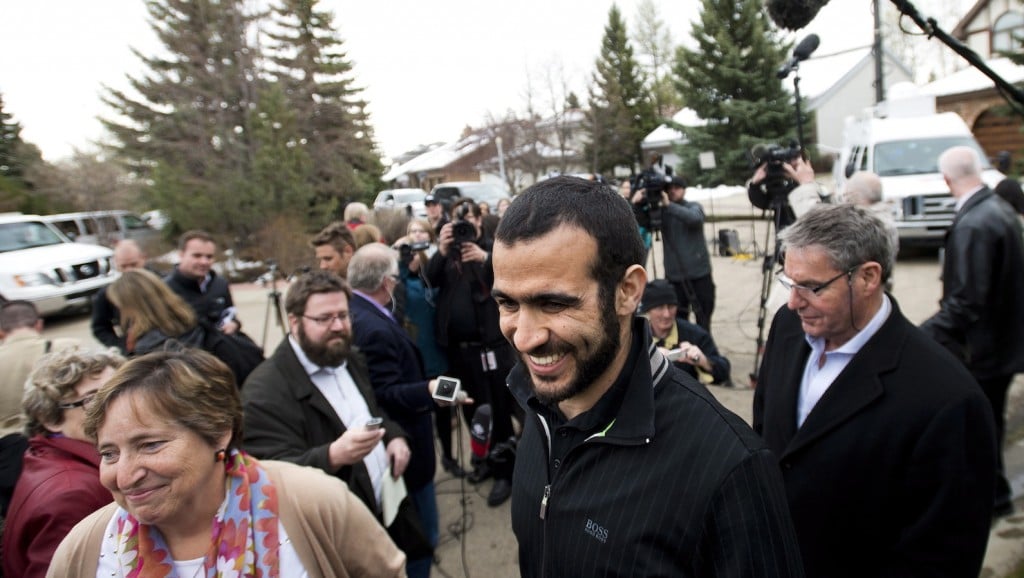 Khadr’s case is back before the Supreme Court of Canada for a third time, with lawyers for the federal government seeking to have him declared an adult offender for crimes he pleaded guilty to committing as a 15-year-old.

Canada has extradition relations with some 83 countries, all of whom want assurances that an offender transferred here will serve their intended sentence, said Department of Justice lawyer Sharlene Telles-Langdon.

The case centres on whether the eight-year war-crimes sentence Khadr was given by a U.S. military commission in 2010 ought to be interpreted as a youth or adult sentence.

Several members of the court’s nine-justice panel challenged Telles-Langdon during her 50-minute oral argument before a packed courtroom.

The federal government has consistently branded Khadr a hardened terrorist, arguing that he was really given five concurrent eight-year terms for each of his five war crimes.

Justice Rosalie Abella wondered aloud whether the U.S. government actually views Khadr’s sentences as being concurrent. The only party that seems to take that view, Abella said, is the Canadian government.

Abella asked Telles-Langdon whether she considers eight years to be a youth sentence. Yes, the lawyer replied.

“Then, isn’t that the end of the story?” Abella said.

Related: Why Scott Gilmore has changed his mind on Omar Khadr

After almost 13 years in custody, the 28-year-old was released on bail last week while he appeals his U.S. conviction, which has drawn fierce criticism from legal and human rights experts.

Khadr’s lawyers say the Harper government is simply being vindictive as it pursues its tough-on-terror, tough-on-crime agenda prior to a fall election.

Khadr’s situation appears to be unique and unlikely to be repeated, said Nate Whitling, one of his lawyers. Because he’s free on bail, the outcome of the Supreme Court case may end up having little direct impact on him, said Whitling, who was scheduled to make his arguments later Thursday afternoon.

“It’s difficult to see how this could affect anyone else.”

Khadr was 15 when he threw the grenade that killed U.S. Sgt. Christopher Speer during a firefight in Afghanistan in July 2002. The U.S. military commission, however, made no distinction between juveniles and adults in sentencing him in 2010 to a further eight years behind bars.

While the government concedes the sentence for the most serious charge — the murder of an American special forces soldier — can only be considered a youth sentence, it argues the other four, including attempted murder, must be viewed as adult sentences.

No provisions exist for an inmate to serve both youth and adult sentences at the same time, so Ottawa classified him as an adult offender when he transferred to Canada from Guantanamo Bay in September 2012 under an international treaty to serve out his punishment.

The Canadian Civil Liberties Association, which has intervened in the case, says it’s another illustration of the heavy-handed approach Canada has consistently taken towards Khadr.

The Supreme Court has taken up Khadr’s case twice before, and has sided with him both times.

In 2008, the court ruled Canadian officials had acted illegally by sharing intelligence information about him with his U.S. captors.

In 2010, the top court declared that Ottawa had violated Khadr’s constitutional rights when Canadian agents interrogated him in Guantanamo Bay despite knowing he had been abused beforehand.