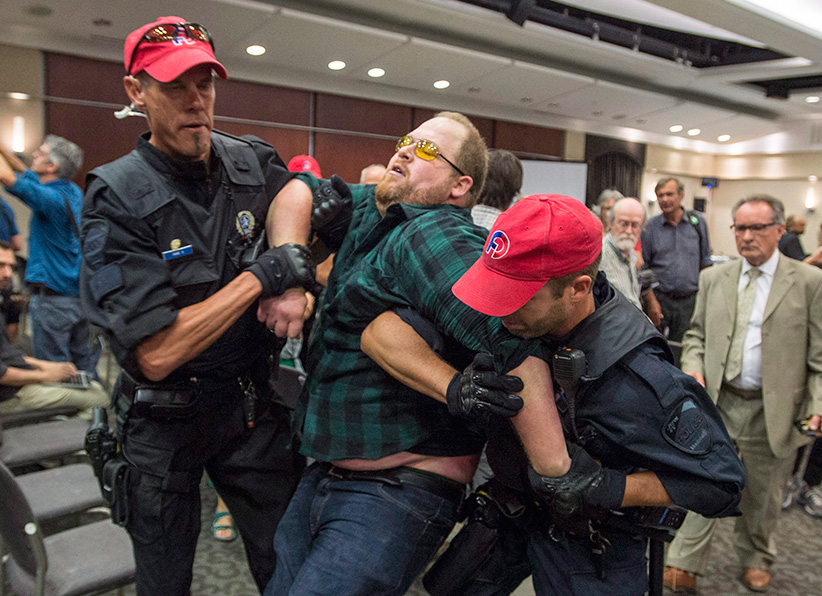 A demonstrator is taken away by police officers after disrupting the National Energy Board public hearing into the proposed $15.7-billion Energy East pipeline project proposed by TransCanada Monday, August 29, 2016 in Montreal. (Paul Chiasson/CP)

CALGARY – Environmental groups are calling for the Energy East pipeline review process to start from scratch now that the National Energy Board has formally appointed new members to the review panel.

Transition Initiative Kenora filed a notice of motion Tuesday arguing that all decisions made by the prior panel members have been put into question after they stepped down because of questions about a potential conflict of interest last year.

“What we’re arguing is that because there is this reasonable apprehension of bias associated with that panel, any of those discretionary decisions that they’ve made carry the taint of that potential bias,” said Teika Newton, executive director of Transition Initiative Kenora.

The Energy East hearings were stalled last fall after NEB chairman Peter Watson and vice-chair Lyne Mercier were accused of a conflict of interest for meeting privately with Jean Charest, who was a paid consultant at the time for the pipeline’s backer, TransCanada, to discuss public opinion around the controversial project.

“There’s no way to remedy that, to fix that, by adding in a new panel and starting midway through the process. The only way to fix the problem is to start all over again from the beginning,” said Newton.

MORE: Why Trudeau and the oil industry are losing the pipeline battle

She said the members who stepped down sat on the panel for close to two years and made dozens of procedural and substantive decisions in the review process, including determining the scope of issues to be considered and who would get intervenor status in the hearings.

Transition Initiative Kenora, which was one of two groups to file a motion last year calling for the prior panel members to be removed, requested that the current Energy East process be declared void or referred to the Federal Court of Appeal.

NEB spokeswoman Sarah Kiley said it will be up to the new Energy East panel to review the notice of motion and rule on it, as well as determine how to move forward.

The review panel will examine a proposed 4,500-kilometre pipeline that would carry 1.1-million barrels of crude oil per day from Alberta and Saskatchewan to refineries in Eastern Canada and a marine terminal in New Brunswick.

TransCanada said it is focused on engaging with Canadians to discuss Energy East, to listen to questions and concerns, and to address them.

“We look forward to the resumption of the Energy East regulatory process and showing why this project is in the national interest,” said TransCanada spokesman Tim Duboyce in an email.

Environmental Defence also made a call for a complete restart of the process Tuesday, saying the current review is “beyond repair,” while also going a step further and asking that the process not restart until the federal government’s review underway on the energy board itself is complete.

“The NEB should pull the plug on the Energy East review and restart it only when an overhauled review process with a credible climate test is in place,” said Environmental Defence’s Patrick DeRochie in a statement.