The wind-down of the Guelph Mercury's daily print edition, which dates to 1867, will throw 23 full-time and three part-time employees out of work 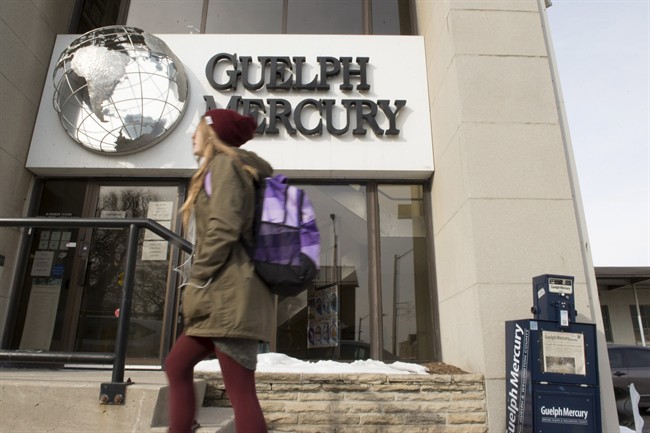 A woman walks by the Guelph Mercury office in Guelph, Ont. on Monday, Jan. 25, 2016. The Guelph Mercury daily newspaper has announced it will stop publishing its print editions this week with 23 full-time and three part-time jobs being affected. (Hannah Yoon/CP)

TORONTO – One of the country’s oldest dailies, the Guelph Mercury, will cease publishing its print editions this week, the latest casualty of the deep malaise in Canada’s newspaper industry, its publisher announced Monday.

The closure will throw 23 full-time and three part-time employees out of work, including eight in the newsroom. The southwestern Ontario newspaper, which dates to 1867, will print its last edition on Friday.

Publisher Donna Luelo expressed regret at the decision, but said shuttering the print edition was the only viable option. A regional digital team would continue to put out a web version.

“The steep decline in classified and national advertising revenues has made it difficult for the printed copy of the daily newspaper to remain profitable,” Luelo said in a statement.

“There is nothing the talented team at the Guelph Mercury could have done differently to affect the outcome.”

Across Canada and North America, newspapers have struggled to stay, or become, profitable as free websites have eaten into traditional classified and advertising revenues, while readers have moved to online news sites.

The Mercury’s circulation in the city of about 115,000 people had fallen to below 9,000 home-delivery subscribers, Luelo said.

In an email, Luelo said the decision would have no impact on the nearby Waterloo Region Record daily, where she’s also publisher.

Montreal’s La Presse, also one of the country’s oldest and largest newspapers, announced the end of its weekday print product last fall in favour of a tablet edition launched in 2013 at a cost of $40 million. La Presse still prints a Saturday paper.

Black Press, which had bought the paper from Glacier Media in December 2014, said it was it had been unable to develop a sustainable business model for the daily.

“This is a sad day for Guelph, not just the wonderful people who work here,” Mercury sports reporter Tony Saxon said in a tweet.

The Mercury said its real estate publication, called Guelph and District Homes, and its lifestyle magazine Guelph Life would continue as a printed product.

However, the company said it would deliver news and “unique local content” through its twice-weekly Guelph Tribune.

In a related development Monday, Rogers said it would be cutting 200 jobs in TV, radio, publishing and administration — about four per cent of its workforce.