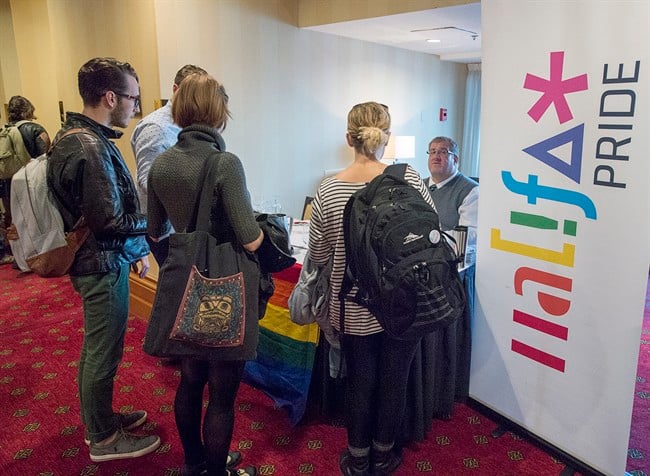 HALIFAX – Emotions ran high in a jam-packed hotel meeting room in Halifax as a resolution that would have removed a pro-Israel campaign from a Halifax Pride event was defeated by a majority vote at the organization’s annual general meeting.

The motion brought forward by the group Queer Arabs of Halifax was rejected Wednesday by a vote of 210 to 106 with five abstentions.

The group said the “Size doesn’t matter” campaign materials, that were part of a booth hosted by the Atlantic Jewish Council at the Halifax Pride Society’s community fair, were not acceptable amidst international condemnations against Israel’s treatment of Palestinians.

The materials promote LGBTQ life in Israel and tourism in Tel Aviv.

“Many members of our group feel like they are isolated or they are marginalized with this content being present,” an unidentified spokesman for Queer Arabs of Halifax told the meeting.

He said the group feels the materials promote a state that has violated international humanitarian law.

“We encourage Halifax Pride to identify any other content that pinkwashes — that uses LGBTQ friendliness whilst at the same time they violate international humanitarian law,” he said. “This is not targeting any local community members or any local community groups … we need to call for social justice for all people not just LGBTQ people.”

The motion drew support from the Nova Scotia Rainbow Action Project, a group that advocates for LGBTQ people across the province.

The action project ran a campaign over the summer to oppose the written materials distributed at the community fair. It also believes the materials amounted to so-called pinkwashing.

The resolution drew vehement opposition from the Atlantic Jewish Council and national Jewish groups, which said it singled the Jewish community out for censorship.

“We choose to talk about Israel because Israel is a core part of our Jewish identity,” said Naomi Rosenfeld, executive director of the Atlantic Jewish Council.

“This is not about what’s going on in the Middle East. This is about why we want to be at Pride and why we want to express ourselves and why this (resolution) is against our freedom of expression.”

The council organized it’s own event before Wednesday’s meeting and many who turned out bought memberships to the AGM, a move that largely helped to sway the vote.

Before the meeting started Halifax Pride Society chair Willem Blois welcomed everyone, but noted that only about 30 people had turned out for last year’s meeting and six the year before.

The Halifax Pride board did not take a position on the resolution but Blois addressed the audience following the vote in an attempt to cool the heads of some who weren’t happy about how the meeting was conducted.

“I want to make it expressly known to everyone that this is not where things end,” he said. “The conversation moves on.”